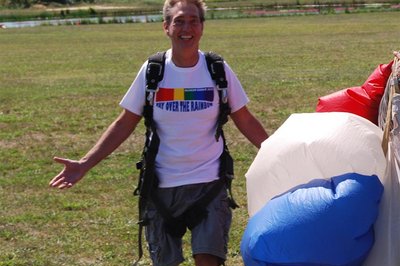 In the days leading up to my first skydive jump, my emotional pendulum swung from excitement and anticipation to butterflies and anxiety — and back again. I was filled with a sense of adventure, mixed with the thrill of potential catastrophe. I had always wanted to do this, but hadn’t yet. To keep my fear in check, I rationalized that it might not be as thrilling or terrifying as I anticipated. If I didn’t think about it, I couldn’t get nervous.

The morning of my first jump, at Skydive Cross Keys, Williamstown, N.J., I watched the introductory video and signed and initialed a seemingly endless file of papers: That I was fit, that I understood there was some risk, that I was not going to sue if anything happened, that if I did sue, I understood that I acknowledged that I had signed seven times that I was responsible for my own death or injuries.

I roamed the hangar and watched people pack parachutes. I also browsed the gift shop, the outdoor picnic area and the diner, though I had no appetite whatsoever.

I watched other divers load up and take off and I took pictures of the array of colorful chutes drifting gracefully to the earth. Since it was Rainbow Boogie last weekend, the lounge was filled with gay and lesbian skydivers from around the continent. I met people from St. Louis, Akron, Houston and Toronto.

When my name was called for group training, I felt the real excitement swell. I was fitted in a harness and we were told what to do during the actual jump, the fall and the landing. We each demonstrated what we were taught and were given a nod and pat on the back and sent out to queue up for our plane. I expected a couple hours of intense training and practice: The whole training process took about 20 minutes.

In the corral near the runway, my tandem partner, Range, fitted me with an altimeter and goggles and adjusted all of my fittings one more time. While our group waited for our plane to taxi over to us, we joked and shared a bit of false bravado as we paced and tried to breathe normally.

Then we boarded the plane. Range went in first, then I, followed by the rest; 14 people crammed onto the two benches inside the little two-prop plane.

We taxied, turned and took off. Until then, it had been all paperwork and videos and practice and costuming and conversation and theory. This was real. There’s only one way back to the ground at this point. If you get up there and say, “No,” they push you out anyway. If you say, “Oh, hell no!” you’re still going out the door. I was about to join a unique brotherhood.

From behind me, Range snugly strapped and hooked himself to me: his chest to my back, from shoulders to hips, leaving arms, legs and head free. When he finished securing us, we reviewed all of the postures, movements and signals and I practiced reaching back to grab the ball to open the parachute.

I watched the altimeter on my wrist as we climbed past 12,000 feet, then I heard the rush of air as the door was thrown open. Two by two, the jumpers in front of us maneuvered to the tiny hole in the side of the plane and disappeared. We scooted closer to the opening as the others fell out.

Then it was my turn.

Seeing the ground more than 2 miles below without the security of a physical barrier was exciting. The thought of throwing myself out into the empty sky was exhilarating. I crossed my arms, tucked myself into a ball and looked down 2 miles, then leaned forward and out of the plane. More than one person, even before I’d gotten a minute’s training, told me the only sport that requires more than one ball is skydiving.

After getting into free-fall position, we quickly accelerated to more than 120 mph and my ears plugged from the rapid pressure change. The air up there is cold, even when it’s 92 degrees on the ground. The earth that seems so far away gets closer every second.

We reached 6,000 feet within seconds and Range tapped me to look at my altimeter. I reached back and pulled the cord to release the chute. It unfurled and made a sudden slowing thwump as the air caught it and we slowed to a glide. Immediately, the jump shifted from exhilarating to peaceful and meditative as we floated in the empty air.

Describing the feeling is like trying to fathom the monumental vastness of the Grand Canyon by looking at a photograph.

It is more exciting than any roller coaster ever created or imagined. It is more spiritual than any painting, musical composition or poem ever written. It is an intensity of body, spirit and emotion that cannot be described unless it’s experienced. It is an act of courage, faith and trust that is unparalleled. It is an adrenaline-pumping thrill that completely overwhelms the senses and blows the mind.

Skydiving is not for everyone. My dad, for instance, gets woozy at the mere sight of a roller coaster. People with a fear of flying or heights are out of the running too.

Rationalizing that it’s not convenient is an empty excuse as Cross Keys/Freefall Adventures is just off the Atlantic City Expressway, about 15 minutes from the Walt Whitman Bridge. There also aren’t any gender, race, age or sexual-orientation constraints to keep you from jumping, if you’re in good health. The first tandem jump costs less than $200.

Some of the Rainbow Boogie jumpers told me that reactions to a first jump are black and white, no middle grays. Those who take the leap either never want to do it again or become hooked on the “nylon crack” and can’t wait to return.

When I touched down, I landed on my feet. I smiled the biggest, craziest, most exuberant smile I think I’ve ever had — and yes, I’m still smiling.

And I’m going back next week.