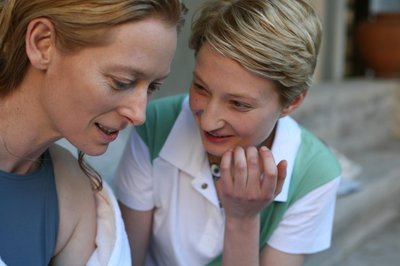 A trio of films with queer themes and/or by queer filmmakers opens at Ritz Theatres today. The movies range from an important historical documentary to an exquisite melodrama and an ambitious literary adaptation.

“Stonewall Uprising” is a useful, if superficial, addition to the numerous histories of the 1969 Stonewall riots. The film, incredibly well edited by co-director Kate Davis, effectively uses the few extant photographs from the event along with recreations and images — such as newsreels and clippings — from the era. Interviews with participants in the riots and other talking heads flesh out the portrait. It’s all done in a traditional documentary approach, neither fancy nor stodgy.

The film is loosely based on David Carter’s excellent book “Stonewall,” and the book’s trajectory — setting the stage, describing the riots and discussing the aftermath — provides the documentary’s narrative arc. But if the disturbing background information — that life was restrictive and difficult for lesbians and gay men in the 1960s — is beaten to death, too little is told about the efforts of queer activists to combat it and police harassment.

The second half of the film chronicles the riots themselves — and the sense of rebellion and how the violence felt justified after so much anger and repression. This is the film’s greatest strength. When an interviewee sheds a tear recounting his experiences at the riots, it is quite moving.

“Stonewall Uprising” may not be the definitive portrait of the riots, but it tells an important story that needs to be told and retold.

Tilda Swinton gives a virtuoso performance in “I Am Love,” a sumptuous, enthralling Italian romantic drama. Written and directed by Luca Guadagnino, this story of a bourgeois Milanese family trying to hold on to the past is a truly sensory experience. From the fantastic pulsing John Adams score and the swirling camera that practically eavesdrops on the characters’ lives to the textures and aromas of the clothes, food, skin and snow, viewers will be completely enveloped by this decadent, insular world.

Emma (Swinton) is the wife of an industrialist who is grappling with unexpected love. First, she chances upon a note from her daughter Elisabetta (Alba Rohrwacher) confessing her passion for a female teacher. She is quietly devastated by the news, and Swinton is remarkably affecting in this moment — just watch how her face conveys multiple conflicting emotions. Yet, Emma cares enough about her daughter that this revelation — which she is asked to keep secret — actually brings the women closer. Moreover, Elisabetta’s clandestine love unexpectedly prompts Emma to act on her sudden attraction to Antonio (Edoardo Gabbriellini), a chef who is also her son Edoardo’s (Flavio Parenti) business partner.

As the relationship between Emma and Antonio develops — a scene of her eating one of his dishes is an intense highlight — and the characters start having romantic fantasies, “I Am Love” induces all kinds of swooning. Guadagnino creates an intimacy that is infectious: Every touch, every smell is palpable. Moreover, scenes of Emma “chasing” Antonio through San Remo or reacting to a terrible tragedy are simply mesmerizing.

“I Am Love” is a truly exceptional film.

Queer filmmaker James Ivory’s “The City of Your Final Destination,” adapted from the Peter Cameron novel, is a handsomely produced but languid, soporific drama.

In the opening moments, Omar (Omar Metwally) is sinking in quicksand. It’s an apt metaphor for his life, which is slipping out of his control. He is hoping to write a biography of the late, obscure novelist Jules Gund, to secure his Ph.D. and a teaching job, but Gund’s estate declined his request for authorization. Egged on by his demanding girlfriend, Deirdre (Alexandra Maria Lara), Omar heads to Uruguay to meet with Gund’s gay brother Adam (Anthony Hopkins), wife Caroline (Laura Linney) and mistress Arden (Charlotte Gainsbourg) to see if they will change their minds.

Ivory deliberately allows viewers to develop a sense of the mysterious Gunds, much like Omar does. The initial impressions are intriguing as they provide many telling details about manners and each character’s sense of decorum and discretion. A discussion about art or money suggests something far larger than the subject at hand.

Yet when an accident — clumsily telegraphed by sinister music — lands Omar in the hospital, Ivory loses control of his film. Deirdre arrives in Uruguay and her character locks horns with Omar and the Gunds as she pushes them to resolve their matter quickly. She’s a symbol, of course, and a clunky one.

“City” is best when little happens slowly, allowing viewers to sink into the rhythms of the story. When Ivory hurries the film, the dramatic tension evaporates and the characters exert little emotional pull. There’s an emptiness here that is enervating. Only a coda piques any interest.

Nevertheless, Metwally makes Omar appealing, and Linney looks severe and acts her brittle best as the icy Caroline. And Hopkins gives a relaxed performance as Adam: His affections with his lover are nicely handled.

Ultimately, “The City of Your Final Destination” is less than the sum of its parts. It is as if Ivory set a gorgeous table, but failed to put any real food on it.