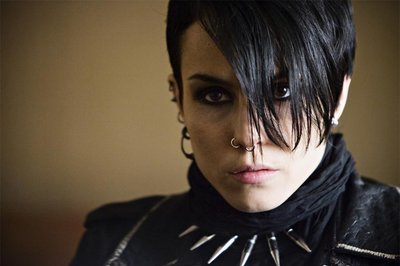 Swedish actress Noomi Rapace gives a star-making performance as Lisbeth, the title character in the film “The Girl with the Dragon Tattoo. ” She provides this dazzling thriller — based on the late Stieg Larsson’s international bestseller — with a visceral kick. As Lisbeth, the actress gets to sleep with both men and women and mete out her own sense of justice. This includes punishing her rapist in one memorable sequence.

The story concerns Mikael (Michael Nyqvist), a journalist facing a prison sentence. He is summoned by a powerful man to solve the mysterious, decades-old death or disappearance of a teenage girl. Lisbeth, who is secretly following Mikael’s moves via electronic surveillance, stealthily provides him with a clue or two. Eventually, she reveals her identity and works with him in earnest.

In a recent phone interview, Rapace claimed she was nervous to take the role because of the immense popularity of Lisbeth.

“It was a suicide mission in a way, because everybody has so many feelings about who she was. I had to force away the outside world — close my eyes and ears — and focus on what I thought and what I wanted to do. I had to find my own personal Lisbeth.”

The actress did a remarkable job. She saw the character as “a fighter, and a survivor … but someone who never sees herself as a victim and finds a way to fight back. Lisbeth takes the law in her own hands because she doesn’t trust society. She has her own way of thinking and handling things.”

The character is very empowered, and Rapace had to suit up in a kind of armor to become Lisbeth. To accomplish this, the actress channeled her inner tomboy. She said she practiced Thai boxing five times a week for six months, and dieted to develop a “more masculine” look.

“I wanted to be more like a boy in my body, but I didn’t want to starve myself to be skinny,” she said. Her goal was to become fit enough to do her own stunts, such as driving a motorcycle.

Yet Lisbeth’s multiple piercings — which give the character her distinctive punk look — gave the actress pause. “I couldn’t take all of them at the same time,” she admitted sheepishly. “I had two done at a time over seven months.” Meanwhile, she worked with makeup and costume designers along with film director Niels Arden Oplev to grow and cut her hair to create Lisbeth’s look. Rapace recalled, “We wanted her to be extreme and odd in a way. We didn’t want a cliché.”

Likewise, the dragon tattoo of the title was a very specific element for the character’s identity. “We worked on the tattoo for months. I wanted it to be really aggressive and brutal. It’s a message to the world to stay away. Her whole outfit is a uniform,” Rapace said — disclosing she actually has no tattoos.

The actress worked equally hard on Lisbeth’s mindset, shaping her character’s inner thoughts as carefully as she developed her outer shell.

“I think that she’s afraid of love. She is beaten and raped, but she can find strength again. With love, she doesn’t know how to behave, and it’s dangerous for her.”

Rapace continued to describe how she saw the character’s sexuality: “I don’t think Lisbeth is bisexual. She’s a sexual spirit and fucks whomever she wants to fuck. I don’t think she ever analyzes herself. She follows her impulses and does what she wants to do.”

While Lisbeth’s lesbian relationship is more implied than her more-explicit affair with Mikael, Rapace threw herself into the sex scenes. “I had to put away my vanity. We needed those scenes to understand Lisbeth; it was an important puzzle piece.”

Yet it was the film’s rape scene that really tried the actress’ mettle. “I had nightmares for weeks after [filming] the rape scene. It affects you. I hate when you see rape scenes on the big screen and it’s ‘entertainment.’ For me, it was extremely important that the audience can feel Lisbeth’s panic and that she’s stuck in this situation — tied up and being [abused]. Shooting it was [us] going to hell for a week. But we came out of it.”

Viewers will come out of “The Girl with the Dragon Tattoo” wowed by Rapace and feeling exhilarated. With two more installments in Larsson’s “Millennium” trilogy forthcoming — and an American remake already in the works — it will be interesting to see where Lisbeth goes from here.

And how far Rapace will go to portray her.