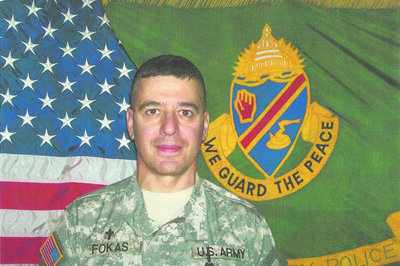 More than 13,000 servicemembers have been discharged from the military since the implementation of “Don’t Ask, Don’t Tell” 17 years ago. The Army is now taking steps to up that number by one, after having launched an investigation into a local National Guard chaplain.

Lancaster resident Aristides Fokas was notified in February that he was being suspended from his duties with the 28th Infantry Division due to a conversation he had with another chaplain last summer in which he allegedly violated “Don’t Ask, Don’t Tell.”

Cpt. Fokas, 46, could not provide the details of the conversation, as the investigation is ongoing, but insisted the charges do not stem from any wrongdoing.

“It was nothing to do with any kind of inappropriate behavior on my part; it was just a conversation,” he said.

Fokas said the impetus for the investigation may be retaliation for former complaints he’s made.

“I raised some issues about religious freedom, the role of chaplains and even the behavior of a superior officer that was way out of bounds while he was in Iraq,” he said, noting that “when you have nothing else to use to hang on somebody who’s a reminder of people’s conscience, you can go to [‘Don’t Ask, Don’t Tell’].”

Fokas, a graduate of Franklin & Marshall College and Lancaster Theological Seminary, was ordained by the United Church of Christ in 1996 and served at F&M as the school’s assistant chaplain for six years.

In 2003, Fokas was commissioned as a chaplain of the National Guard, a position he said he first began considering while watching Robert MacNeil and Jim Lehrer’s “PBS NewsHour” on campus.

“They were the only ones at that time early on in the war who were listing the entire necrology, listing the individual soldiers by name, and I found that to be really moving,” he said. “I felt that if I was going to be of any service to my country, I might even be able to gain a better sense of personal empowerment in my life, and that this was the time to do it if there ever was one.”

Chaplains serve a variety of functions, such as officiating at religious services, conducting funerals and taking part in Bible studies, workshops and presentations.

Fokas said one of a chaplain’s primary duties is direct counseling to current and former military personnel, a responsibility that allows the servicemembers to confide completely about their experiences and struggles.

“We have utter confidentiality and can’t be pressed by any authorities to talk about our encounters with soldiers and what’s said during counseling. We’re the only ones in the whole military who can do that; that privilege isn’t even given to physicians or therapists,” he said. “The Army sees us as the doorway to the mental-health system.”

Fokas also carried out these duties overseas during a nearly two-year deployment to Iraq from 2005-06.

Most recently, Fokas had been on drilling status — he spent one weekend a month with the other members of his unit participating in trainings at the base in Annville — and while he is still allowed to come to the base and is being paid, he is not permitted to carry out any of his duties.

“As of my last drill weekend, after the charges were officially presented to me, I sat in a room doing school work,” he said. “I am free to walk about and do whatever, but I am to refrain from doing anything that could be interpreted as ‘chaplain’ work.”

Fokas has been assigned a judge advocate general, a military attorney, and his case will eventually come before an Army general and a board, who will review the facts and make a decision on a possible discharge. Fokas said he was told by his commander that the process could take anywhere from eight weeks to eight years, which he said he found both “comforting and hysterical.”

He noted that the timing of the investigation is ironic, considering the recent statements by the president and other high-ranking military officials that they are committed to repealing the military’s ban on openly gay servicemembers.

“The commander-in-chief has spoken out that [the repeal of ‘Don’t Ask, Don’t Tell’] is his intent. The Chairman of the Joint Chiefs of Staff has spoken out that this is the direction in which we’re going, as have retired generals like Colin Powell. And Lt. Dan Choi, who came out on public television last year, is back with his unit drilling. This is a messy time and ‘Don’t Ask, Don’t Tell’ is kind of a farce. This is clearly a law that’s headed toward the dustbin. It’s a wasteful, fraudulent abuse of government resources in a time when there are so many more things that we need to put those resources toward.”

Those who support “Don’t Ask, Don’t Tell” often proffer that repealing the law will damage unit cohesion, which Fokas said is not a logical argument.

“Cohesion comes about through shared experience and training; it doesn’t come from people all being alike at the beginning and then forging these bonds together. Even all white males are quite, quite different and come from different backgrounds. If you put any group of people together, regardless of sexuality, you’ll see a handful of really differing, strong personalities and it takes shared experiences, not shared characteristics, to have them work as a unit.”

He noted that while homophobia does still exist within the military, most military personnel would rather be comfortable with their fellow servicemembers’ abilities than their sexuality.

“A lot of soldiers do come from conservative backgrounds and come from rural areas where they might not necessarily mix and mingle with openly gay, lesbian or transgender individuals. And they often enter the military at a very young age with preconceived notions of how life should be,” Fokas said. “But on the upside, we know from interviews and polls that a majority of soldiers just don’t care. They just want to know who’s got their back in a dangerous situation.”