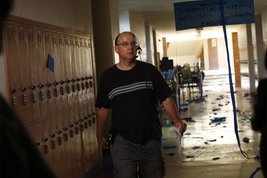 Prolific out filmmaker David DeCoteau has two movies out on DVD this month — “The Pit and the Pendulum,” his latest queer re-imagining/adaptation of an Edgar Allan Poe story (after “The Raven” and “The House of Usher”), and “Brotherhood V: Alumni,” the newest installment of another series he helms. On the phone from his home in Los Angeles, the filmmaker spoke about his movie genre, which focuses less on plot and more on hot guys in their underwear.

DeCoteau’s films, for the uninitiated, are B-grade thrillers in which sinister things happen to beautiful people. In “Pit,” seven gorgeous, athletic college students agree to allow JB (Lorielle New) to hypnotize them. Alas, several characters meet horrible ends. In “Alumni,” a handful of high-school friends is reunited a year after a murder to ferret out the killer.

The filmmaker insists his works are “thrillers” and not “horror movies” because there is little blood and no gore: “They are not terrifying. I’m very squeamish and proper. I’m not into extreme violence and gore. I’ve done vampire movies without blood and fangs. They are the opposite of true horror films — rarely are there naked women, coarse language or [graphic violence].”

Likewise, his Poe adaptations put a new twist on an old master and eschew suspense for sensuality. “We used the original text as inspiration, and [added] gay and bisexual characters,” DeCoteau said, joking that the scariest thing in his films are when straight guys “see two guys in their underwear with their shoulders touching, and not knowing what will happen next.”

And DeCoteau is all about the tease. “I push the limits, and I respect the limits, and there is a lot of negotiation — how tight and what color the underwear is,” he said. “It’s in the contract! Guys want black, not white, because of VPL — visible penis lines — especially if they get wet.”

“Pit” has a lengthy scene of two hot guys wrestling in their briefs, while “Alumni” has a lengthy love scene between two underwear-clad men. The filmmaker describes these moments as “over-the-top” plot elements meant to twist the audience’s expectations but not shock. He admitted that these scenes, and his films, are campy, “but I don’t like to wink at the audience. They are a bit ridiculous, but I try to do something different with each one and have an outrageous moment.”

The love scene in “Alumni” is the first same-sex kiss and cuddle in the “Brotherhood” series, and DeCoteau is proud of this, even if he claims it is difficult to get actors to do “boy-boy intimacy” onscreen.

Likewise, getting the actors he wants to appear nude is an uphill battle he chooses not to undertake. “People are not willing to drop trou just to be in a movie. The minute the underwear comes off, 99 percent of the actors would run. The actors who want to be stars get paranoid [about nudity] unless Gus Van Sant asks them to do it in an important big-budgeted project.”

As such, DeCoteau focuses his energy on casting, selecting talent by personally reviewing the 5,000-7,000 submissions he gets for a film. “I’m impressed by their energy when they walk into the room. The look gets you in the room. Once in the room, you have to deliver the performance.”

He recalled producers criticizing actors for being “too pretty,” acknowledging that some guys who come in are so striking “the straight guys in the office are checking them out.”

DeCoteau said the actors he discovers and casts — such as Jason Shane-Scott (“One Life to Live”) in “Pit” and Nathan Parsons (“General Hospital”) from “Alumni” — trust him because they know he will make them look beautiful, not foolish.

What’s more, the filmmaker is careful about how he portrays his characters — especially the gay and bisexual ones. Both “Pit” and “Alumni” feature queer characters that are both good and evil. DeCoteau describes that evil gay characters provide “a dilemma” — citing Sharon Stone’s “killer lesbian” from “Basic Instinct” — but emphasizes that “the characters’ being bad has nothing to do with them being gay.” One solution he has found is to level the playing field by introducing many gay, lesbian and bisexual characters in his films.

If the filmmaker’s style is not for everyone, he has amassed legions of fans. “It’s a weird subgenre,” DeCoteau acknowledged. “But there is a niche out there that likes my films. Otherwise I wouldn’t be making them!”

Or so many of them.