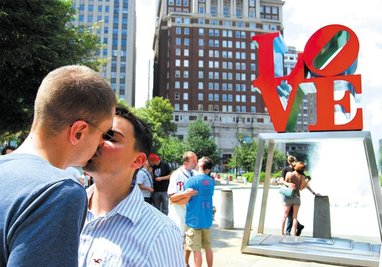 We hear it all the time: “You’re everywhere. ”

Well, we’re really not, but we do try to cover as many events as we can. We usually get to several places in a week and sometimes several in a day when things are hopping. There are occasionally overlapping events on our Wednesday deadline that prevent us from getting photo coverage and, at other times, we don’t have enough advance notice for an event, but we try to include as many as we can.

Photos are a big part of the stories we tell at PGN and, this year, we brought our readers more photos of events from our area than ever before. We occasionally include pictures to add context to a story, but more frequently we print photos from the special events that happen each week. We also feature annual photo spreads of OutFest and Philly Pride, some photomontages of QFest, Liberty Stampede and Philly Black Gay Pride and a special Sports in Philly version of Scene in Philly.

Here are our favorite photos for 2009, representing organized events, awards, Pride, rallies, fundraisers, protests, sports and other events, and why we chose them.

A great photo doesn’t need the support of words. One of our favorite pictures was of David Jones and Chris Oronzi, and Jim and Richie Madden, during the kiss-in protest in Love Park last summer. Organizers held the protest in response to incidents in which police detained same-sex couples in Texas and Utah for public displays of affection. We spent two hours in the park, through the protest set-up and speakers, to have about 20 seconds to get the picture (1).

We covered many rallies and protests in 2009, including those organized by ACT-UP, Calcutta House and others to raise awareness of the state-budget impasse and the proposed arts tax. But this picture captured our hearts along with our passion to protest.

Equality Forum held the first national rally outside D.C. since 2000 in front of Independence Hall on a rainy Sunday afternoon in May. We were there and have included in our picks a photo of supporters with a rainbow of umbrellas and raincoats who came out to hear Nathaniel Frank, Frank Kameny, Dan Miller and Nurit Shein speak (2).

We were there when President-elect Barack Obama and his wife Michelle left 30th Street Station for the inauguration in Washington, D.C., last January, a historic opportunity afforded to about 250 invited guests and press. Among the riders invited to join Obama on the train was openly gay Ohio history professor Lisa Hazirjian and her partner Michelle (3).

The Running of the Steps

Sometimes we like a picture because of its fun value — both shooting it and the final product. North East Regional Pride, an association of pride organizations in the Northeastern United States, held a weekend conference in our city in March, with 100 or so participants sharing ideas about pride events. And, at the behest of Philly Pride Presents executive director Franny Price and senior advisor Chuck Volz, they ran the steps at the Philadelphia Museum of Art (4).

Philadelphia and the William Way LGBT Community Center also hosted the Centerlink conference in the fall, the largest-to-date gathering of community-center executive directors in the world. The group spent time in workshops, dinners and social events talking about how to improve LGBT centers around the world. As often as we take group photos, this one impressed us because of the number of people on the grand center stairs (and we had to go back the next day and retake the shot to get it right) (5).

We covered quite a number of events at the center in 2009, including the elevator dedication, the Transgender Day of Remembrance, receptions for the Holocaust and ballroom culture exhibits, the installation of Mazzoni Center’s anniversary exhibit, as well as numerous art-show openings, an interfaith prayer breakfast with Harry Knox and ’Dolph Ward Goldenburg’s farewell gathering.

We shoot many award, grant and oversized-check presentations, scholarship winners and political and social recognitions — and we’ve gotta be honest here: They’re not all eye-catching. [Editor’s note: Trust us, we know.] Panel discussions and people at podiums just don’t grab attention the way five guys in bathing suits competing for Mr. Gay Philadelphia would. [Speak for yourself, Scott.]

But we cover these presentations for the organizations’ sakes as much as for your interest. We covered the Rainbow Awards, the Pride awards, the Lambda Legal Awards, Mazzoni scholarships, QFest Awards, Sapphire Fund’s Platinum Awards, Tony Sparacino Memorial Scholarship and Greater Philadelphia Professional Network awards, and did a spread for our Pink Penny Awards.

We like the photo of Chad Allen receiving the Lifetime Achievement Award during last year’s renamed Philly QFest — not so much because it’s colorful, bold or funny, but because it is a singularly nice moment (6). Besides Allen, we got celebrity pictures of Johnny Weir, Jack Mackenroth, Sharon Gless, Miss Philadelphia 2008 Brintha Vasagar and too many of our local LGBT entertainers to mention, as well as a fun photo of George Takei on the bridge of the U.S.S. Enterprise at the Franklin Institute with chief astronomer Derrick Pitts (7).

We know everyone loves Philly’s festivals and the photo spreads that result. We chose the poodle picture because it’s just plain fun and captures the spirit of the events (8). Tens of thousands participate in Philly Pride and OutFest, and the staff of PGN joins in for our own enjoyment just as much as for the coverage. We also covered Black Gay Pride, Latino Pride and the Dyke March last year, as well as CineFest, QFest and Equality Forum.

By Land and By Sea

The Penn Pride Games last year gave us another great photo. Not only is the image visually stimulating, but it also represents the future LGBT leaders, organizers and advocates. This event, organized by Penn’s Athletes and Advocates Tackling Homophobia, was the culmination of QPenn Week at the university (9).

Many other sports clubs also got exposure through our lens. We covered the opening pitch of the City of Brotherly Love Softball League, lifetime achievement awards presented to two members of the Spartans wrestling team, the Gay Games Cologne promotions at Tavern on Camac and the Fins Swim Team postal swim fundraiser (10). (Of course we like the Fins picture. Who doesn’t?)

There is never a shortage of fundraisers in our area. From the recent Delaware Valley Legacy Fund toy drive to concerts, raffles and readings benefiting Giovanni’s Room, organizations are holding events 12 out of 12 months. The photo we like that represents these events is from Sapphire Fund’s casino night in May (11). We also liked that we could win prizes!