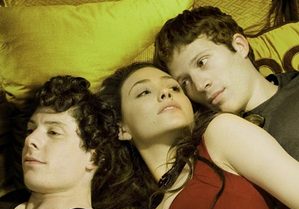 A hit on the gay film festival circuit back in 2005, the short “Dare,” written by openly gay native Philadelphian David Brind and directed by straight Adam Salky, captured an intense sexual encounter between high-schoolers Ben (Adam Fleming) and Johnny (Michael Cassidy). Now, a feature-film version of “Dare” is opening at the Ritz Theatres. Although the centerpiece seduction scene from the short is mostly recreated in the new film, Brind and Salky recast the leads. In the feature, Ashley Springer and Zach Gilford play Ben and Johnny, respectively, while Emmy Rossum assumes the role of Alexa, a straight girl who had a small part in the short.

In a recent interview at the Prince Music Theater, where a scene of the entertaining film was shot, Brind admitted, “There was no plan to make this into a feature,” though he conceded he kept developing scenes, such as Ben’s coming-out speech, and characters, particularly Alexa.

He continued describing his inspiration for the feature: “There is a moment of unspoken communication in the end of the short where Alexa knows something’s happened [to] Ben, but he doesn’t tell her what. I know this wasn’t the thrust of the short, but this moment is so important. That set something off in my brain about Alexa.”

Brind said Alexa is actually the character he “is most like,” which may explain why he told her backstory along with Ben and Johnny’s. “Dare” unfolds as a triptych, with audiences getting a glimpse into each teen’s individual life before they all converge under the covers in the last reel.

“My interest in [writing] the feature was to take this high-school film genre that I love, and take the archetypal characters and unpeel and unmask them in a way I had not seen before,” Brind explained about his storytelling strategy. “The idea of the triptych felt right to me, to be in one character’s world so completely that you see something through their eyes. If you revisit it through another character — someone else’s eyes — their moment, it feels differently and I like that. It’s uncomfortable.”

Brind explained how he built the “dares” that Alexa and Ben act upon around their desires: “Alexa uses her sexuality strategically. It feels more heightened because she’s doing it in such a deliberate, ambitious way. Ben just wants to connect with someone he finds beautiful and, in his mind, that seems impossible.” By having both of these characters seduce or be seduced by Johnny, these virginal outsiders suddenly start experiencing sexual empowerment, or what one character in the film calls “the power of a dick.”

“That’s an exciting feeling. I remember it being exciting, and fleeting. It doesn’t necessarily lead to what you want,” Brind recalled. “I remember being that age. You want what you want, and you go after it.” Then he added, “As if we as men — particularly gay men — are driven by our sexual desire and don’t think about anything else.”

As the film’s gay character, Ben’s struggle with the shame he feels about his sexuality — evidenced in a coded talk with his mother (Ana Gasteyer) — may feel underdeveloped to some viewers. Yet Brind defended his portrait of the character. “He feels completely undesirable and disconnected. The idea that someone would desire him feels so impossible that he shuts it off. What I went after in his story was telling his anger. He gets so angry that Alexa is able to experience [her sexuality] and be free with it, and do it openly, and he is infuriated. I felt that growing up. I did. My girlfriends were dating people openly and I couldn’t do that. It didn’t seem possible at the time. That repressing feeling, you feel angry, and want to act out on it.”

In high school —Friends Central — the writer definitely fit in, he said, because “I worked hard at it. I thought popularity was important. My closest friends were the cool, pretty girls in my class. I knew that I was gay. It was this odd combination of being part of the mainstream and, at the same time, feeling exceptionally different on the inside.” He came out after graduation, although he told some girlfriends he was gay during high school.

Like Brind’s experiences, “Dare” is more concerned with how the characters measure their status in class and popularity than their sexuality.

“No one ever asked me to tone [the film] down,” insisted the writer, who also co-produced the under-$2-million indie. “The [characters’] sexuality is the big driving force behind them, but it is not the sum total of who these people are — especially Johnny. I think we’ve all experienced that.”

Now that “Dare” is done, Brind reflected on the process as a whole: “The point was not to exorcise some demons. The point was to share it with other people and hopefully affect someone.”

If his film offers young viewers the opportunity to connect with straight, gay and bi-curious characters, the message of “Dare” is to “be who you are.” Brind emphasized this sentiment, and added, “Although you might fight that to the death, that’s what you’ve got to work with. Even if it doesn’t seem connection is possible, there is hope.”