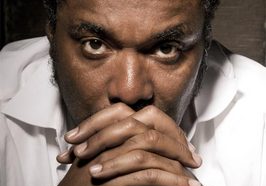 Lee Daniels, the out — and outspoken — producer and director, recently met with PGN at the Palomar Hotel to discuss his searing new film, “Precious: Based on the Novel “Push” by Sapphire. ” He appeared suitably vibrant, dressed in a bright-yellow shirt and blue jeans, as he emoted and effused about being a queer filmmaker.

The director began by recounting a particular exchange that gets his blood flowing, if not boiling: “A very powerful Hollywood producer told me [about ‘Precious’], ‘You can tell a gay man made this movie.’” Daniels responds to the comment brashly. “It was a compliment, I think,” adding another, more sarcastic “I think” to emphasize his point. “All of my films have a queer sensibility, because my fingerprints are all over them.”

From “Monster’s Ball” and “The Woodsman,” which he produced, to his directorial debut, “Shadowboxer,” Daniels’ films are edgy, extraordinary and frequently over the top.

“Precious” is all of these things. The story concerns an illiterate, pregnant-for-the-second time (by her father) African-American teenager named Clareece “Precious” Jones (Gabourey “Gabby” Sidibe), who is mentored by a lesbian teacher. Full of wild, tense, emotional moments and dazzling performances, the film has won awards in Sundance and Toronto. Mo’Nique is already garnering Oscar buzz for her role as Precious’ abusive mother, Mary, and Sidibe is a strong contender for a nomination as well.

While “Precious,” along with the films Daniels produced, received accolades aplenty, his directorial debut, “Shadowboxer” — which starred Helen Mirren as a dying hitwoman in love with her stepson (Cuba Gooding Jr.) — received almost uniformly negative reaction from critics.

“Bastards! Bastards!” Daniels cries. “That’s my baby, too. I love my baby!” He gets himself under control, and continues, “I think that people were expecting something different from me after ‘Monster’s Ball’ and ‘The Woodsman.’ ‘Precious’ goes back to that world. But for me, ‘Shadowboxer’ was a fucking party. I have Dame Vivienne Westwood in to costume my movie in Philadelphia. C’mon! I have Dame Helen Mirren! I’ve got Macy Gray … ”

As he recalls the film, he stops and admits, “I think I’m really humbled by the experience of ‘Shadowboxer,’ because I never got a bad review, ever. I grew up. That [film] made me grow up, and I needed that as a filmmaker. I had no perspective, except from the other two films I produced.”

Daniels more than answers his critics with “Precious.” Reminded of the incendiary response the book had upon publication, the filmmaker said, “I stalked Sapphire for 10 years. Her book is a piece of brilliance. My reaction to it was guttural, absolutely guttural. Why I wanted to do this was to say, ‘Guess what? The hero is a lesbian!’”

Daniels is all about provocation. He gets his ire up when he sidebars in the interview to address a surprising discovery he made doing research for the film. He recounts the episode with passion: “I got to the Gay Men’s Health Clinic, and I’m looking around to see all the boys — and there weren’t any. The statistic is staggering that it’s black women. Honey, I’m like, I’m almost 50 and I don’t know this shit! I thought the boys were getting [HIV]. It’s not. The Gay Men’s Health Clinic is treating African-American women. The men are on the fucking down low. You got to get these men [on the down low] out of the closet. Think about all these women infected with HIV. Well, they are infected because men on the down low are having sex with them.”

The filmmaker climbs off his soapbox and returns to the matter of discussing “Precious,” a project he says he wanted to bring to the screen even before he made “Monster’s Ball.”

Daniels’ latest film captures the very essence of the novel. Viewers can smell the bucket of chicken Precious steals in one scene or the mustiness of the hallways and apartments where the characters eke out their lives. The film features harsh scenes of Precious being raped by her father as well as flights of fancy, such as one in which Precious and Mary enact an homage to “Two Women.” The sequence, filmed in black and white and featuring the actresses speaking Italian, is a highlight.

“That was really funny,” recounted Sidibe, in a separate phone interview. “We had three weeks of Italian training and not once did Mo’Nique say the lines correctly — until the camera rolled. We did two takes, the one in the film and one for safety.”

Daniels deflected criticism about this scene as well. “Somebody said to me, ‘Why would they be watching “Two Women,”’ and I said, ‘Because I am watching “Two Women,” and it’s my movie. You’re in my world!’” He calms down and adds, “I thought it was so truthful — so in-the-moment.”

The scene is truthful, and it is important in establishing the universality of these women struggling against oppression. How Sophia Loren and Eleonora Brown fared in World War II Italy is not that far removed from Precious and Mary’s experiences in Harlem, 1987.

And it is not that far removed from Daniels growing up in Southwest Philadelphia, where he says there was “zero tolerance” for gays.

He recalls, “I was beat up, and I went away to a white world that was more tolerant [of sexual minorities]. I don’t want to know what I would have become if I’d stayed where I was. In our culture, homosexuality is so bashed, and I think that’s what fucked me up.” Parallels to Precious’ situation are entirely intentional.

In contrast, while Sidibe insisted that she can identify and empathize with her screen persona, she is nothing like the character she portrays. She said, “I felt like I knew Precious. She was such a real person to me. What makes her story universal is that she’s been ignored, neglected. I’ve felt that more times than I care to count in my life, but I’ve not been what she’s been through. [Daniels] reminded me that we’re getting a peek into her life. She can’t be completely sad or pathetic. It’s just a Tuesday for her. It’s a bad day. But they’ve all been bad days.”

The student-turned-actor used her knowledge from being a psychology major to inform her character. Sidibe has always been interested in what she calls, “the anatomy of a victim and victimizer.” In the film, Precious’ body language is very telling, and the actress conveys more with a silent squint than with a whole page of dialogue.

She said “time and growth” helped her gain perspective on how to play Precious. “She’s a warrior. She’s getting things thrown at her, and she keeps getting up. I’m an adult, and she’s a teenager. I’ve grown up to accept my life and like it.”

Sidibe explained that her own self-worth enabled her to create the character. “Like I shouldn’t have confidence because I’m not skinny,” she joked. “It’s important that people learn who they are and what makes them happy. If I didn’t know myself, I [would not have] come out of ‘Precious’ so easily. I like myself through playing her.”

Nevertheless, scenes of Precious being raped by her father were tough for the actress to film, and Sidibe broke down crying while blocking these scenes. The actress spoke with co-star Mo’Nique for hours to develop a coping technique for shooting those parts.

However, the screen newcomer admitted Mo’Nique intimidated her at first. “I didn’t talk to her because I was so scared I’d say something stupid. But once I did, and the awkwardness was out there, it worked. Gabby and Mo are not in the fight Mary and Precious are in. It was tough to film scenes like [Mary] throwing a skillet at my head, but when Daniels said ‘Cut!’ we sang and danced together.”

Daniels has nothing but praise for his cast. He deemed Sidibe’s performance “phenomenal” and said Mo’Nique is equally revelatory in her role — especially when she gives an astonishing speech at the film’s end. Daniels has Mo’Nique as Mary wearing “Whatever Happened to Baby Jane?” powder on her face. He remembered informing her, “Mary’s going out in public, honey, she has to put powder on her face!” If the actress was initially reluctant, the moment pays off fabulously.

The filmmaker chose Mo’Nique to play Mary even though she’s cast against type because of his longstanding friendship with the comedian, who also appeared in “Shadowboxer.” (Fun fact: Her character’s name was Precious).

“She cracks me up,” Daniels said before he launched into his theory about why Mo’Nique is able to surprise viewers with her dramatic talents: “Comedians have a third eye — they don’t see the world the way ordinary actors, or people, do. They are able to take a character and really twist the fuck out of them. Jim Carrey does it. Richard Pryor did it in ‘Lady Sings the Blues.’”

And yet Daniels, as a gay man, has the same ability to twist a character or a story and make it relatable. With “Precious,” he does an extraordinary job — and will fiercely debate anyone who argues with him.