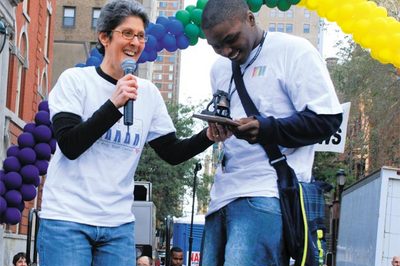 It was a beautiful day in the Gayborhood last weekend for the 19th annual OutFest.

Rainbows abounded on clothes, pets and buildings as entertainers energized the already-rowdy crowd, and community organizations and activists turned out in full force to take part in the world’s largest Coming Out Day celebration.

Franny Price, executive director of Philly Pride Presents, which stages the annual street festival, estimated that some 45,000 LGBTs and allies celebrated in the Gayborhood last Sunday. Attendance was slightly higher than last year and evidently not impacted by the National March for Equality, which took place in Washington, D.C., the same day.

About 135 vendors set up shop throughout the streets of the Gayborhood, selling artisan goods and LGBT-related merchandise and informing passersby about local LGBT-service organizations and other resources.

Returning this year were the annual high-heel race and penis-shaped bagel-eating contest, and back by popular demand was a mechanical bull that Price said was a big hit with last week’s crowd.

Price noted this year marked only the second time in OutFest’s history that the event actually fell on Oct. 11, the designated National Coming Out Day, which she said made this year’s celebration even more momentous.

“The whole day was so great. There was just so much going on. Everything was special in its own little way.”

A handful of representatives of antigay group Repent America with signs and a microphone near the corner of 13th and Locust streets, where the main-stage entertainment was taking place. Five years ago, several Repent America members were arrested for protesting OutFest, and the Third Circuit Court of Appeals last year upheld a lower court’s ruling that the group was permitted to attend the event but could not “move from distributing literature and wearing signs to disruption of the permitted activities.” Price said she thought the group’s use of a microphone was on the border of that stipulation.

“They were a little bit loud when they first got there,” she said. “And it was disappointing because the ruling allows them to be there and express their First-Amendment rights, but not to disrupt the event. But the police did cut them off from the microphone eventually when the festival really got going and the louder they got, so we were happy about that.”

Philadelphia Police spokesperson Officer Jill Russell said no arrests were made during OutFest.

A Norristown woman said she sustained injuries after she tried to intervene in a fight on 13th Street outside Woody’s. The woman said four officers attempted to break up the fight between two other women she knew, and that a Civil Affairs officer threw her to the ground, knocking her unconscious.

Officer Mitchell Spritzler of the office of Chief Inspector James Tiano, the police LGBT liaison, said the report from the incident cited that the participants were intoxicated and that police broke up a fight between the women twice. He said police offered medical assistance to the woman who was injured but that she declined.

The woman told PGN the officers did not offer medical assistance.