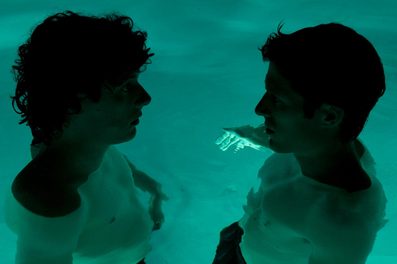 In the aftermath of its separating from TLA Entertainment Group earlier this year, the Philadelphia Film Society is offering a five-day Philadelphia Film Festival — 18-1⁄2, as it is known — from Oct. 15-19. The program features new films by several queer writers, directors, producers and personalities, two of them Philadelphians.

One highlight of 18-1⁄2 is the Philadelphia premiere of native filmmaker/producer Lee Daniels’ award-winning drama “Precious: Based on the Novel ‘Push’ by Sapphire.” Astonishing, heartbreaking and ultimately uplifting, this remarkable drama about Claireece “Precious” Jones (Gabourey “Gabby” Sidibe), a pregnant 16-year-old in 1987 Harlem, unspools at 7:30 p.m. Oct. 18 at the Prince Music Theater, 1412 Chestnut St. Daniels is expected to attend the screening.

“Precious” catapults viewers into the screwed-up life of its title character. Trapped in unrelenting and unforgiving circumstances, she is the victim of repeated sexual abuse by her (absent) father and tormented mentally and physically by her mother (Mo’Nique). Daniels stylishly conveys Precious’ life to viewers, and it is alternately riveting and depressing. She escapes her perpetual despair through flights of fantasy in which she imagines herself to be a celebrity. Daniels milks these moments — a contrast to her harsh reality — for all their ecstatic joy.

Yet what really comes across in this vibrant, satisfying film is how Precious finds her inner strength and voice through the guidance of a lesbian teacher, Ms. Rain (Paula Patton), at an alternative school. The interaction between Precious and Ms. Rain forms the emotional center of this rollercoaster of a film.

Sidibe gives an extraordinary performance in her screen debut, communicating the depth of her interior pain with just a squint. As Precious’ mother, Mo’Nique has some remarkable moments, most notably a speech in the film’s end that will leave viewers speechless.

If the tone of “Precious” is wild and inconsistent, it is meant to mirror the character’s incredible journey of self-discovery. This film will resonate with anyone who has felt different or troubled.

Filmed in Center City and Bryn Mawr, “Dare” originated as a short film. (It played the gay film-fest circuit back in 2005). This feature-length version, directed by Adam Salky, who is straight, fleshes out the characters and their backstories. Although not as sharp as the short, this enjoyable film has its pleasures.

The plot concerns Alexa (Emmy Rostrom) and her gay best friend Ben (Ashley Springer) both pining after the irresistible Johnny (Zach Gilford). Yet the point of the film is — wisely, thankfully — not who sleeps together, but how an agent of change dares each of these characters to take a chance and take control of their lives.

Alexa has an encounter with an actor (openly gay Alan Cummings) who encourages her to shake things up. Ben is hit on by a guy (Brind in a cute cameo) in a coffee shop who urges him to act. And Johnny’s session with his therapist (queer icon Sandra Bernhard) forces him to examine what he wants and why.

The interactions among the characters feel mostly genuine, but Alexa’s, Ben’s and Johnny’s fancy houses and cars provide just as much shading as the recreational liquor, pills and sexual activity these high-schoolers engage in throughout the film. Brind and Salky seem so concerned with making sure every line, every prop and every camera movement has meaning, “Dare” lacks the requisite emotion. It’s a shame the film isn’t bolder, or even naughtier, but it’s still well worth a look for the curious and the bi-curious.

Out French filmmaker François Ozon’s peculiar entry “Ricky” (2:30 p.m. Oct. 16 and 3 p.m. Oct. 18) does not feature queer themes or characters, but it does have a title character who is “different.”

Nine months after sharing a cigarette and having sex with Paco (Sergi Lopez), Katie (Alexandra Lamy), a single mother and a factory worker, gives birth to Ricky (Arthur Peyret). Returning from work one day, she discovers her cute baby’s back has some strange bumps and bruises. Katie accuses Paco of hurting their child, but he did nothing to endanger his son. Later, when those bumps develop into wings — and Ricky flies out of his crib — Katie and her daughter Lisa (Mélusine Mayance) are flabbergasted.

Whether this metaphysical story flies with viewers, however, depends on their tolerance for the magical-realist tale. Ozon features an equal number of compelling scenes of Ricky flying and/or in peril, as well as one where he plays up the family dynamics — emphasizing the mother/child bond, and how Katie’s unconditional love for her child prompts her to act perhaps irrationally.

Yet the film’s tone is too idiosyncratic to be completely effective. Ozon uses sinister music to cue viewers that something is not right with the baby, but Ricky’s wings are never malevolent. Lisa becomes jealous of her mom’s bonds with Paco and Ricky, but her cruelest act is throwing her doll.

Nevertheless, there is something unexpectedly, undeniably poignant about “Ricky.” This curious film about an unusual baby is inexplicably beguiling.

Lastly, “The Loss of the Teardrop Diamond” (noon Oct. 16 at the Prince; 2:15 p.m. Oct. 17 at the Ritz at the Bourse) boasts an original, unproduced screenplay by the late Tennessee Williams. While not available for preview, the fact that this film played the Toronto Film Festival back in 2008 suggests it is for Williams’ completists only.