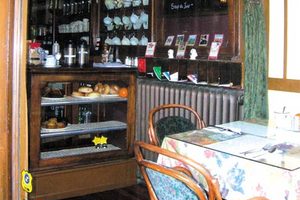 It’s hard to say which is more addictive at Michael’s Café, the dinners or the breakfasts.

Owner Michael Clouston opened the café, 1623 E. Passyunk Ave. six months ago after making a name for himself in real estate. Judging from the results, he’s made a shrewd business move. The philosophy at Michael’s is to keep things simple and good, and the good people there have quickly made a name for themselves by serving up perfectly executed comfort food made from scratch, in an elegantly homey environment. The results are exceptional quality, reasonable prices and large enough portions to give anyone’s home cooking some serious competition.

Standard dinner favorites include the meatloaf ($14), a hearty slab of beefy goodness topped with a robust brown gravy and with fresh veggies and mashed potatoes on the side.

With colder weather creeping in, the chicken stew ($13) is another surefire winner, with fresh chicken, celery and carrots and a huge hunk of cornmeal bread that you can butter up and eat on the side or break up in the stew. We highly recommend the latter, as it soaks up the chicken stock and adds a nice texture to the stew.

For diners looking for something on the lighter side, the café’s broiled tilapia in light lemon butter ($14) or the linguine with grilled shrimp ($16) is a great way to go.

Vegetarians aren’t left out in the cold at Michael’s, as there are a few meatless items on the regular menu as well. The veggie burgers ($7), made fresh from red pepper, chickpeas, oatmeal, onion, tomato and lemon juice, are a favorite. There’s also the big salad ($6.50), which Clouston admits was inspired by the dish often ordered on “Seinfeld.” But with its healthy portions of tomatoes, cucumbers, olives, goat cheese and walnuts, we can’t argue with the name.

Aside from the big salad and veggie burger, the lunchtime crowd is also served well at Michael’s Café, whether dining in or grabbing some take-out offering like the open-faced grilled cheese with tomato ($5 or $6.50 with bacon).

Brunch is usually one of the busiest times for the café, and with good reason: Breakfast really pulls on the heartstrings. Maybe it has something to do with the fact that they serve breakfast until 3 p.m. daily.

They know us so well.

Actually, it is the food. As a general rule of thumb, you can always gauge how good a restaurant is for breakfast by the quality of its home fries, and Michael’s does not disappoint with its crispy and well-seasoned breakfast potatoes. That attention to detail carries over to the entrées as well. The orange ricotta pancakes ($5) are a delight, thanks to their delicate texture and the orange flavor, making all other pancakery seem leaden by comparison.

The café omelet ($6.50), with fresh mushrooms, spinach and choice of cheese, is another daytime favorite, as is the French toast ($7). The breakfast meats (bacon, turkey bacon, sausage or ham, $3) are a must-add to your meal. The sausage patties we ordered were far above and beyond the frozen, uniform circular pieces of pork we’re accustomed to.

If Michael’s only did standard comfort foods, it would be enough to inspire complete devotion. But the chefs also turn their inspirations into daily and weekly specials.

The night we dined, specials included an Indian-inspired curried pork with braised cabbage, topped with crème fraîche and served with seasoned rice. The spices were substantial without being strong enough to scare away the casual diner.

Other specials included a crisp and refreshing beet salad with blue-cheese dressing, oranges and fresh Parmesan, and an excellent butternut squash soup ($3.50), topped with cognac butter and toasted squash seeds that gave the soup an added and welcome richness and crunch.

And if you happen to miss out on a special you like, you’re encouraged to ask for it. If they have the ingredients, they’ll make it for you.

The breakfast specials were even better. We were a bit skeptical when we saw risotto being offered for breakfast but, in the hands of the fine chefs at Michael’s, it was a treat covered in seared sausage and topped with a perfectly poached egg.

With its cozy, friendly atmosphere and amazing food, Michael’s Café is an irreplaceable taste of home.