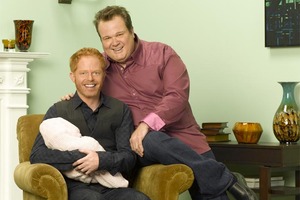 Queer TV you can always see

As the World Turns Will Mason and Noah keep going? Monday-Friday, 2 p. m. on CBS.

One Life to Live Look for Kyle and Fish. Monday-Friday, 2 p.m. on ABC.

FRIDAY Glee It’s a repeat. Check back on Wednesday for new episode. 9 p.m. on Fox.

SATURDAY Making His Band Musicians and singers (including a transgender contestant) compete for a spot in P. Diddy’s touring band. 9 p.m. on MTV.

SUNDAY The Amazing Race The new season starts with a two-hour episode and there’s always at least one gay team. 8 p.m. on CBS.

Desperate Housewives The catty drama kicks off its sixth season. 9 p.m. on ABC.

Family Guy Stewie is destined to be gay on this animated series. This week he goes alternate-reality-hopping with Brian. 9 p.m. on Fox.

MONDAY Dancing with the Stars The stars continue to work it. 8 p.m. on ABC.

Gimme Sugar: Miami The LA Truck Stop gals are in Miami to hook lesbians up for love in this rerun of the first episode. 10 p.m. on Logo.

Dancing with the Stars The second round continues. 9 p.m. on ABC.

So You Think You Can Dance? Watch contestants go for it. 9 p.m. on ABC.

WEDNESDAY America’s Next Top Model There’s a healthy amount of crazy among this season’s crop of contestants vying for Tyra Banks’ approval. 8 p.m. on the CW.

So You Think You Can Dance? More dancing, fewer stars. 8 p.m. on Fox.

Glee It’s a new episode of the high-school singing-club comedy. 9 p.m. on Fox.

Modern Family This new sitcom features a gay couple with an adopted daughter in its cast of characters. 9 p.m. on ABC.

Top Chef The best of all the cooking-competition reality shows with a regular menu of queer competitors is rolling the dice in Las Vegas. 10 p.m. on Bravo.

THURSDAY Survivor: Samoa Strangers compete on Samoa’s rugged islands for a chance to claim the million-dollar prize. 8 p.m. on CBS.