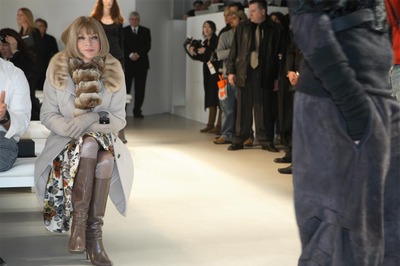 If Vogue magazine provides Anna Wintour’s “point of view” on fashion — a $300-billion industry — then glossy new documentary “The September Issue” provides a rare behind-the-scenes look at Wintour as she creates the 2007 Fall Fashion Issue — the biggest issue in the magazine’s history.

The icon, dubbed both “The Ice Woman” and “The Pope,” is cold and enigmatic, to be sure. But filmmaker R. J. Cutler teases out some of what goes on inside the mind of this incredibly feared and respected woman. Yes, she hides behind her sunglasses at Fashion Week and causes staff and designers to shake in her presence, but she is also very bold and forward-thinking. Her instincts are, as the film shows, impeccable. When it is explained that Wintour was the first to start using celebrities on the cover of Vogue to sell issues — “Fashion is a seamless part of celebrity,” someone astutely observes — it becomes obvious she was a magazine trendsetter.

In a pre-credit interview, the editor-in-chief talks about people being “frightened of fashion.” Perhaps this reveals her confidence as her greatest strength. But such self-assurance is hardly surprising for someone of her position and reputation. In contrast, when a designer from Yves Saint Laurent confides/confesses his insecurity to her about a line, it is a telling moment.

Cutler follows Wintour as she edits the magazine, visits with designers and attends various meetings with her fiercely loyal staff. Curious viewers get an insider’s look at what decisions the all-powerful editor-in-chief makes — how she wants “more fur” or “less black” in a layout or photo shoot — and why her decisions are gospel, even when they upset her staff.

Cutler also spends considerable time with the people around and behind Wintour. But the film’s probing of Vogue’s publisher, Tom Florio, provides almost no insight. Asked if there is any area of fashion Wintour does not influence, Florio responds, “No.” He also declares that Wintour’s chilly demeanor means he has to provide the “warmth” to associates.

Better are scenes featuring editor Grace Coddington, once a model herself, who has been with Wintour at Vogue for two decades. Coddington practically steals the film when she confides to the camera about her frustrations, particularly when money is involved. When Coddington creates a dazzling 1920s-era photo shoot, and Wintour kills a gorgeous Galliano spread, she bemoans the expense and mutters about the shoot being in soft-focus, something Wintour doesn’t like. It may seem as if Coddington is being deliberately passive-aggressive, but her complaints create the only tension in this otherwise innocuous portrait. Watching these two old pros battle it out over what’s “in” on a rack of clothing is what makes “The September Issue” engaging.

For all the shots of fabulous clothes, shoes, handbags and cosmetics, the film shows how Vogue’s real purpose is, as Coddington suggests, “building a fantasy around the girl.” If the hard work and tough decisions showcased throughout “The September Issue” indicate anything, it is that this industry is far from glamorous. A last-minute color blocking re-shoot, a retouch of a flabby stomach in a photo or trying to decide what to do about cover model Sienna Miller’s hair and teeth illustrate the real issues behind creating a magazine.

And perhaps this is ultimately the portrait that emerges: The magazine defines Wintour as much as Wintour defines the magazine. She is seen nurturing new talent in a cutthroat industry; there is a wonderful subplot featuring Thakoon, a designer Vogue cultivated. Wintour also acknowledges, and not grudgingly, the efforts of Coddington and other members of her staff for being the best at what they do. She also listens carefully to the Neiman Marcus executives, just as her staff listens closely to her.

But for all the perceptive details, one wishes there was more to “The September Issue.” Cutler puts audiences in the presence of an idol and allows them to study her expression, her body language and, of course, her clothes to get a sense of who she is. Alas, most of what is seen is on the surface.

The film features only a handful of “sit-down” interviews with Wintour. She talks about her childhood, her daughter (who wants no part of the industry) and how her siblings are “amused” by what she does. These tidbits may leave fans wanting more. But one suspects Wintour’s control-freak nature (only hinted at here, but played up in “The Devil Wears Prada”) decided on how much — or how little — to reveal to the camera.

Wintour may be inscrutable in the end, but still, those she fascinates should see this intriguing portrait.