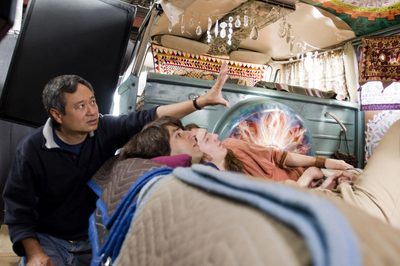 Oscar-winning director Ang Lee’s latest film, “Taking Woodstock,” opening today at the Ritz, is a warm, affectionate comedy based on the memoir by out writer Elliot Tiber (nee Teichberg). The film, written by James Schamus, stars comedian Demetri Martin as Tiber, a closeted gay man who finds himself while trying to save his parents’ failing Catskills motel in the summer of 1969. Coordinating with event producer Michael Lang (a seductive Jonathan Groff), Elliot soon becomes instrumental in bringing the three-day festival of peace, love and music to the Bethel, N.Y. region. His efforts, both a blessing and a curse, are also a cause for comedy to ensue.

In a recent interview, Martin expressed trepidation about playing Elliot in his first acting gig. “I got his book and read it. The memoir that he wrote is pretty graphic about his coming-of-age sexually. Knowing that Ang did ‘Brokeback Mountain,’ I was like … ‘I’m not gay, or a trained actor, I think you might have the wrong guy … ’”

But screenwriter (and Focus Features head) Schamus assured the comedian that the film would focus more on the weeks prior to the festival and Elliot’s relationship with his family, and less about his homosexuality.

Nevertheless, Martin said, he was concerned about portraying the character truthfully.

“Any qualms I had were more about my ability to portray him believably. Not that I can’t seem like a gay person, but simply, that there’s a difference between kissing somebody you are in love with or have a huge crush on and [acting]. I want to really sell that. When I saw that in the script, I thought that might be tricky.”

Yet Martin rises to the challenge, making his Elliot likable and endearing as he comes of age. Elliot’s sexuality is never in question; it is just not the main focus of “Taking Woodstock.”

Schamus explains that queer sexuality is a secondary function of the film’s plot. What’s more, this strategy is part of a greater arc of Focus Features films that depict how attitudes toward homosexuality have changed over time.

“[Ang and I had] already done the ‘coming-out’ story with ‘The Wedding Banquet.’ Oddly enough, I felt like ‘Brokeback Mountain’ was a movie where being gay was a problem and you had to deal with it,” said Schamus. “In [Gus Van Sant’s] ‘Milk,’ the problem was homophobia. Being gay is fine. We’re happy we’re gay. Homophobic assholes suck. Then we got to ‘Woodstock’ and I thought, ‘how about just have the main character as gay? He’s our hero. So what?”

“I didn’t avoid it, but I didn’t want to make too much out of it either,” Lee said. “It’s just part of the whole big party. It just exists that he’s gay. Like he’s Jewish.”

He added with a laugh, “Not that I have anything to say about [being] Jewish.”

The Oscar-winning filmmaker acknowledges that in his previous films (‘Banquet’ and ‘Brokeback’), “being gay was the central issue.” He appreciates that the gay characters in his films are “outsiders,” who, like Tiber, do not fit into mainstream society. “I very much identify with them,” he said, adding that he is moved by the stories featuring these characters.

“Taking Woodstock” is more laidback than Lee’s previous work. Its casual style is part of its charm, and much of the appeal is courtesy of Martin’s ingratiating performance — he is the anxious center in a sea of wackiness.

Says Schamus, “It was important that we showed that through the course of this one weekend that there were people around who were angels to Elliot, like Vilma (Liev Schreiber; see sidebar) and others who would say, ‘Be yourself: this is what [the festival] is all about.’”