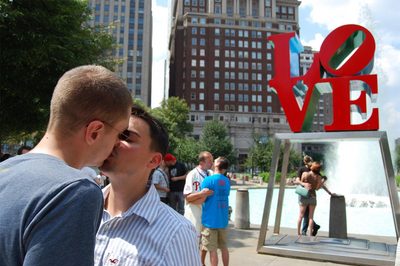 David Jones (left) and Chris Oronzi, Jim and Richie Madden and an ally couple embrace at Love Park Aug. 15 as part of the nationwide Kiss-In for Equality to raise awareness of LGBT issues. Kiss-ins were held in more than 40 cities throughout the country, with Philadelphia’s event drawing about two-dozen couples. The movement was spurred largely from several recent incidents in Texas and Utah in which same-sex couples were detained for public displays of affection. Photo: Scott Drake