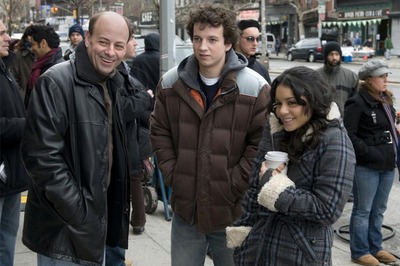 Once upon a time, out writer/director Todd Graff wanted to be a rock star. He even had a rock band, “The Pedantics,” and four of its five members were gay.

“This was back in 15th-century B.C.!” Graff says with a laugh over the phone from New York. “We played CBGB and opened for Siouxsie and the Banshees and Echo and the Bunnymen. I thought it was what I wanted to do.”

But Graff’s career took a decidedly different direction. He got into film, where he worked as an actor in features like “Five Corners” and “The Abyss.” He then turned to screenwriting, penning such films as “Used People” and “Angie.” In 2003, he wrote and directed his first feature, “Camp,” a well-received autobiographical story about his summers at a musical-theater camp.

Graff’s latest film, “Bandslam,” unites all his past passions. This engaging youth drama with music concerns Will (Gaelan Connell), an awkward teen who is trying to fit in at a new high school. Writing letters to David Bowie as a coping mechanism for his loneliness, Will finds himself managing a group of high-school misfits. He soon turns these outcasts into serious contenders in a Battle of the Bands.

While queer audiences may identify with Will’s feelings of alienation and invisibility, Graff insists that “Bandslam” is not a “gay” film.

“There is no gay subtext for Will as a character in the movie,” he says, but does acknowledge, “There is an overlap between adolescent feelings of social rejection and the questioning of gay kids and outcasts for other reasons. When you feel you don’t fit in, you don’t fit in.”

Whereas the filmmaker used his real-life experiences to create “Camp,” he deliberately steered away from making “art from my life.”

“In this one, I’m processing my rock-star fantasies when I was a kid. I’ve never outgrown them.”

Graff also realized some of his musician dreams by getting Bowie himself to appear in a cameo.

So how did Graff direct The Thin White Duke?

“I was told I was not allowed to,” he recalls. “He doesn’t like that, they said. I thought, ‘Is he really going to be a dick?’” Pausing for dramatic effect, Graff gushes, “And he was like the greatest guy ever!”

Bowie acts as a father figure of sorts to Will in “Bandslam” and many of the film’s teen characters have “absent fathers.” Significantly, Graff dedicates the film to his own dad, who passed away at age 88 during the shooting. Graff is surprisingly candid about his complex feelings toward his father.

“We had a close but difficult relationship. We were very much in each other’s lives, even though there were real problems. He had many wonderful qualities but they were trumped by his narcissism. It never faded but got worse.”

Graff eventually revealed that his father came out at age 80. This, the filmmaker explains, “was a seismic blast for my family. The key thing about my life is my relationship with my dad and his sexuality. To have someone acting out the acceptance of being gay through his son — it was a springboard [for him] to face his own sexuality.”

Given that Graff draws on life in much of his work, will he make a coming-out film in the future?

“I have no master plan. I’m out and everyone knows me professionally,” he says, noting that he is usually hired for studio work, which leaves him on his own to initiate independent projects. “I’m a proponent of gay coming-out stories, even if they aren’t fashionable. The feelings they bring up resonate fairly widely.”

The hope is that “Bandslam” will reverberate with audiences and continue to raise Graff’s profile in Hollywood. Although the film is teen-oriented — and Vanessa Hudgens of “High School Musical” fame has a featured role — the writer/director believes audiences who enjoyed films like “Say Anything …” and “Almost Famous” will respond to “Bandslam.”

“Before I saw it, it was not something I’d cross the street to see,” Graff confesses. But, looking at the final cut, he enthuses, “This movie was made for people like me.”

Audiences gay and straight, young and old, should also embrace his warm and winning music-filled film.