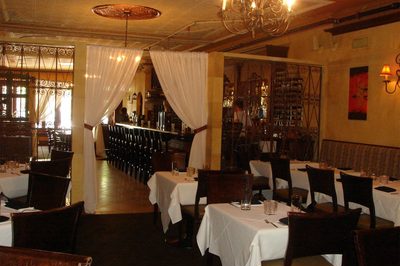 So QFest is over, but for all you cinephiles out there, I have great news. Well, probably old news, but I just discovered it. The Bryn Mawr Film Institute is a marvelously restored movie palace out on the Main Line. In addition to showing current independent films, the venue has film discussions, open-screen Mondays where local filmmakers can show their shorts and a wonderful slate of retrospective films. I unfortunately missed the screening of Mel Brooks’ “Blazing Saddles.” (It was the first R-rated movie my brother and I saw as kids. We howled at the bawdy jokes and my brother literally rolled in the aisle when the bean scene came on. Boys … I was more captivated by Madeline Kahn as Lili Von Shtupp, the goddess of desire.)

The reason for my excursion out to the ’burbs was to check out Verdad, 818 W. Lancaster Ave., a great new Euro-Latin restaurant in Bryn Mawr. Conceived by executive chef Nick Farina of Blush Restaurant and Howard Taylor, owner of the former Carmine’s Creole Café in Bryn Mawr, Verdad is a tapas restaurant and tequila bar, focusing on small plates with Spanish, Cuban, Brazilian and Mexican influences.

Verdad is divided into three segments: The first room has large glass windows that open up fully to let you dine semi-al fresco, meaning you get fresh air and a little sunshine without having to worry about pedestrians knocking over your wine glass as they try to navigate sidewalk tables. The second area contains the bar and comfortable booth seating. And the rear dining room, where we sat, was slightly more formal. The whole restaurant is decorated in rich gold tones with small pops of color throughout. Inset wine shelves lined with candles and delicate scroll room dividers live in harmony with the modern art on the walls. I would be remiss if I didn’t mention the bathrooms, which were probably nicer than my first apartment.

We started our meal with a selection from the “Nibbles” part of the menu. I guess it was a Freudian slip because we hadn’t ordered cocktails yet, but my dining companion told the waiter that we wanted to order some nipples. I settled for the chips ($5), a small plate of tortilla chips that came with two sides: a classic guacamole and a surprising strawberry habañero salsa. Interesting and flavorsome, the strawberries had a little kick that snuck up on you but wasn’t overpowering.

Our other nibble was the stuffed mission fig ($4), a warmed fig topped with a strip of brie and drizzled with an aged balsamic reduction. Move over, nipples; this was heavenly.

To go along with our meals, I ordered the watermelon margarita ($9) from the specialty cocktail list, a delicious combo of tequila, watermelon schnapps, fresh-squeezed lime juice and blue agave nectar. Its sweet and sour flavor reminded me of a watermelon Jolly Rancher, but better. My dining companion, with much giggling involved after the nipple incident, ordered the Fluff Head ($12). After he managed to calm down a bit, he told me that it was also a delectable drink, made of raspberry, citron, blueberry and orange vodka and pineapple and cranberry juice. I’m not a martini drinker but my favorite-sounding item on the menu was The Fog that Surrounds, the name for Verdad’s combo of Ketel One vodka, harrissa (a North African hot red sauce) and blue-cheese-stuffed olives.

After our cocktails, we got down to business with a crab ceviche ($7), a citrus-based marinated seafood dish that is part of many Latin American cuisines. At Verdad, the fresh crabmeat was combined with green apple, lemon, sugar snaps and poblano-seed oil. The dish is served in what looks like a martini glass without the stem, over a bowl of ice. We really enjoyed the contrast in tastes and texturesin this eye-catching dish.

Switching to the taco section, we ordered the Kobe ($10), a hard-shell taco stuffed with scallions, manchego cheese, dried dates and spiced Kobe beef. If you haven’t tried beef and dates, and I hadn’t, get yourself out to the ’burbs and try ’em.

Next, we went land and ordered the short ribs ($11), a tender tapas-sized serving of short ribs in a port-wine reduction with fingerling smashed potatoes. Along with the figs, this dish was my favorite.

Most of the plates are tapas-style, but Verdad also has a selection of big plates for those who don’t like to share. We ordered the paella ($32) from the “Large Plates” section. I wasn’t sure about the paella at first — it looked a little soupy — but it turned out to be a tasty dish. The rice was plentiful and chock full of lobster, oyster, shrimp, saffron and mussels.

For dessert, I ordered the citrus cake ($5). A sweet chiffon cake with a sour twist, it was flaky and came swimming in a vino-tinto sauce with citrus supremes, not to be confused with Diana Ross and The Supremes.

My dining companion ordered the traditional flan ($5), made exceptional with a honey lavender sauce. Noel is a bit of a flan aficionado and he flipped for this version.

I should make note of another plus at Verdad: There’s a free parking lot just behind the restaurant and also street parking, if you have quarters available. If you really want to be environmentally correct, you can board the R5 commuter train, which will drop you off right near the restaurant and BMFI Theater.

August is Paul Newman Month, alternating with the Comedic Stimulus Package, featuring classics like Charlie Chaplin’s “Modern Times.” The restaurant and the theater are just steps apart, so make it a night with dinner and a movie. I’ll be the one at “Cool Hand Luke” with the fig drippings on my chin.