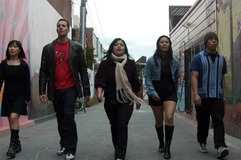 As QFest gets underway in earnest this week, a quartet of fine films deserves attention. Two of the titles are about adopted young women seeking their birth mothers, while three of the films celebrate theatrical performance. Yet each yields considerable pleasure through music and drama, wit and wisdom.

H.P. Mendoza receives the festival’s Rising Star Award on July 16 before the 7:15 p.m. showing of “Fruit Fly.” Anyone who saw Mendoza’s previous effort, “Colma: The Musical” (check it out on DVD), which he wrote, composed and starred in, knows that this gay, gay, gay, gay, gay Filipino-American filmmaker is immensely talented and clever. From his fabulous credit sequence and equally wonderful opening number to the amusing lyrics he sings during the closing crawl, Mendoza’s film is an enjoyable low-budget musical. In fact, his love of all kinds of performance is on display here as Mendoza gently mocks acting, performance art and musicals: He even includes a witty monologue about the purpose of monologues. Perhaps some of this shtick covers up the fact that his story — about Bethesda (L.A. Renigen from “Colma”), an adopted young woman looking for her birth mother — is a bit thin. But plot isn’t really the point in “Fruit Fly.” Mendoza is more concerned with staging a high-energy audience sing-a-long about fag hags, or having Jacob (Aaron Zaragoza) perform a duet with himself using a computer. These songs showcase Mendoza’s ability to turn out clever, smart and even smartass lyrics, even if they don’t quite advance the plot. While the supporting characters — an adorable gay guy named Windham (Mike Curtis) and cute lesbian couple Sharon (Theresa Navarro) and Karen (E.S. Park) — are a bit one-note (dramatically, not musically), the performers are quite charming. So too is this modest musical that will delight even those viewers who normally steer clear of song and dance films. 7:15 p.m. July 16 at Ritz East 1, 125 S. Second St.; 2:30 p.m. July 18 at Prince Music Theater, 1412 Chestnut St.

John Hurt plays Quentin Crisp with delicious relish in “An Englishman in New York.” This film opens in the 1980s, when Crisp arrives in America. The bon vivant tosses off bon mots to audiences who attend his evenings of questions and answers. One night, Crisp describes AIDS as being “a fad” and his comment gets him into some trouble. However, it is Crisp’s friendship with artist Patrick Angus (Jonathan Tucker) that proves just how much meaning his words have for others. The contrast between the prideful Crisp and the ashamed Angus forms one of the more moving chapters in this episodic film.

“An Englishman in New York” is less engaging in its final third when Crisp partners with Penny Arcade (out actor Cynthia Nixon, miscast), a performance artist who helps him renew his sense of self-worth. This slight and stagy film runs just over an hour, but it is mostly satisfying due to the witty script and Hurt’s note-perfect performance, as well as Denis Hare’s fine supporting work as Crisp’s close friend Philip Steele. 7:15 p.m. July 17 at Ritz East 1; 12:15 p.m. July 19 at Prince

The filmed play “Just Say Love” is a two-hander written by David J. Maurielo, about a gay guy named Guy (Matthew Jaeger) who meets a straight guy named Doug (Robert Mammana) on a park bench one afternoon. Guy is reading Plato, and Doug mentions his sex addiction between burps and eating his sandwich. They retire to Guy’s apartment, where they have a “no-strings-attached” encounter. Of course, these two guys get emotionally closer each time they meet for just sex and a more serious relationship develops. While a bit too formal in its execution — most of the production is set against a black background that spotlights the minimalist action — “Just Say Love” is endearing because of the performers’ ability to inhabit their roles and become “real” people. Although some of the dialogue is lousy — there is too much talk about colons — the speeches between Guy and Doug discuss their love and loss ring true. If the expected sex scene is a series of artfully composed body shots that borders on pretentious, a flashback that breaks from the aesthetic style is more affecting. “Just Say Love” benefits from the pair of fine performances, mostly good use of music and a few special effects that bring it to life. It’s not a great play, but it’s not a bad film. 12:15 p.m. July 18 and 9:15 p.m. July 19 at Ritz East 1

“Off and Running” is a remarkable documentary and arguably the best nonfiction film in the festival. Avery Kline-Cloud is an adopted African-American teenager with two adopted brothers and two moms. As she starts to think about college, Kline-Cloud also thinks about contacting her birth mother. It is a decision that sets a chain of painful events in motion. Lyrically made, Nicole Opper’s film addresses the universal thoughts of “Who am I?” and “Where do I come from?” with incredible intelligence, sensitivity and grace. Kline-Cloud is an incredibly self-possessed teen, and her heartfelt story becomes painful to watch as her decisions have serious consequences. As she questions what it means to be black — having grown up in a white Jewish world — or tries to get her life back on track, never having felt she fit it, Kline-Cloud comes to the epiphany that you are in control of who you become. It is a powerful message, and one that will reverberate with anyone who sees this incredible story. Don’t miss it. Noon July 19 at Ritz East 1