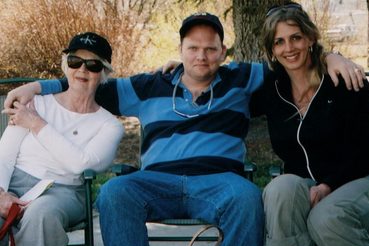 Kimberly Reed, the transgender director of “Prodigal Sons” — a documentary about her family — started making movies when she was a boy growing up in Helena, Mont. As Paul McKerrow, he filmed his brothers playing parts in Super 8 home movies. Reed’s adopted brother, Marc, loved being the center of attention, and he always had the lead. Reed’s other brother, Todd, who is gay, always played the female.

Now that the children are adults, Reed films her family again. This time, however, the story is very different — and much more painful. Returning home after a long absence, the director hopes to reconcile with Marc, from whom she has been estranged for many years. She also is coming to terms with her own identity, introducing her girlfriend Claire to her family and reuniting with her high-school friends, all who are meeting Kimberly for the first time.

What happens in “Prodigal Sons” is, as they say, stranger than fiction. Marc suffers from mental illness, the result of a head injury he sustained as a young man. He has some frightening onscreen outbursts. What’s more, Marc discovers that he is the grandson of Orson Welles and Rita Hayworth. At one point, Kimberly accompanies him on a trip to Croatia to meet Oja Kodar, Welles’ last lover.

Although this resolves some identity issues for Marc, his illness soon gets the best of him. His subsequent fighting with Kimberly — he literally pummels her in one horrific moment caught on camera — soon forces the family to deal with Marc’s demons. Yes, much of the film is difficult to watch, but it is also quite riveting.

On the phone from New York City and between film festivals, Reed talked about making “Prodigal Sons” and “balancing” the storytelling by focusing on her relationship with her brother and their simultaneous stories regarding personal identity.

“What I was trying to do with the structure of the film was to make a statement about being transgender through understatement — letting that issue disappear.” At times, however, Reed reminds viewers of her identity struggle, as when Marc shows pictures of Kimberly as male to folks in Croatia, which upsets her.

Although Marc is not always seen in a positive light, Reed felt she had to be hardest on herself. “It’s tricky when you work in the first person in any means of expression. The first job you have is to explain yourself and be as tough as you are. Otherwise, it’s a solipsistic journey that others can’t relate to.”

Her personal approach benefits the film immensely. An outsider would not be able to get the family intimacy Reed captures on camera — such as a tense moment when the police are called to prevent Marc from hurting himself and/or others at a holiday gathering.

“The increasing intimacy develops as the film moves along,” Reed said about the narrative arc, noting, “I don’t think an outsider could ever have been privy to that.”

Moreover, the filmmaker defends her decision to show Marc and her family at extremely low moments. Significantly, she said, she doesn’t feel “Prodigal Sons” exploits her siblings or their mother by presenting this difficult chapter in their lives.

“I have a really amazing, resilient family that is capable of tremendous love and support. I knew if I kept the camera rolling, that would come out as much as the challenging times,” Reed said. “What fueled me and my mom, who has become quite an activist, is giving [the mentally ill] a voice.”

The juxtaposition of Marc and Kimberly’s stories shows how much Reed grew from filming her brother, even when their relationship hit a snag. She recalled, “When I was making the film, he said, ‘The truth is the truth.’ And, to use a good overly pretentious word, I was obfuscating. I really learned from Marc how to make peace with my past by admitting that the truth was the truth.”

“Prodigal Sons” is a remarkable story of a family’s transformation, and one that Reed and viewers will benefit from sharing.