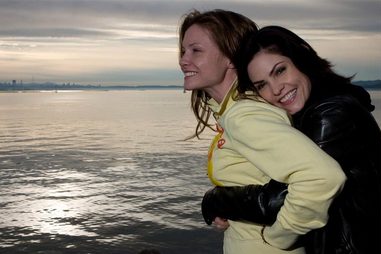 QFest, the new name for the annual Philadelphia International Gay and Lesbian Film Festival, unspools July 9-20 on area screens. In addition to the 100-plus features and shorts are parties, panel discussions and award ceremonies that showcase the latest in LGBT cinema.

This year’s festival also celebrates its 15th anniversary with flashbacks from the past — presentations of fabulous classics like “The Adventures of Priscilla, Queen of the Desert” and not-so-fabulous films, like “Myra Breckinridge.” Yes, QFest provides something for every queer taste.

Although it opens with a whimper — “Hollywood je t’aime” (see review below) — and not a bang, there are some real highlights. Here are reviews of some titles to catch before the closing-night world premiere of “The Big Gay Musical.”

The pre-credit sequence of “Hollywood je t’aime,” filmed in stylish black and white, has Jerome (Eric Debets) moping around rainy Paris. His lover Gilles (Jonathan Blanc) has left him, he hates his job and he desperately needs a change. Spotting a travel ad for California, where it’s summer every day, Jerome hops a plane and the film jumps into color. It’s time for sun, love and possibly a career as an actor.

But as Jerome (and audiences) soon discover, his vacation from life is hardly much fun. In fact, “Hollywood je t’aime” is more boring than anything else, as it lumbers along from one uninteresting episode to the next. (It says something that, outside of “Speed,” few films have spent so much time on an L.A. bus). Jerome’s trip to the beach proves that California can be chilly in December. At least while he’s there, he meets a friendly drug dealer (Chad Allen, recipient of the festival’s Artistic Achievement Award), who introduces him to a possible agent. Moreover, his fast friendship with Kaleesha (Diarra Kilpatrick), a transgender prostitute, helps him find a room in a house owned by Norma (Michael Airington), an aging drag queen. These relationships reinforce those cliché old saws that Hollywood is filled with dreamers, stoners and whores. But surely they can be more appealing and complex than this film’s assortment of tired, jaded characters. Nothing that happens — an open casting session, a job at a restaurant or a potential hookup in a bathhouse — has any dramatic impact or meaning. And Debets plays the morose Jerome so dispassionately, it becomes hard to care about him or his efforts to get out of his funk. In fact, one almost wishes he’d stayed home. Viewers may wish they’d stayed home too. Thursday, July 9, 7 p.m., Prince, 1412 Chestnut St.; Saturday, July 11, 2:30 p.m., Ritz East 1, 125 S. Second St.

Johnny Weir, dubbed a “Pop Star on Ice,” is one queer figure skater. That’s queer as in odd or different, and not in necessarily sexual orientation. While folks may assume the flamboyant, outspoken skater is gay — he enjoys shopping and wearing fabulous clothes, and he takes a bath with his best male friend — Weir never publicly addresses his sexuality. This wonderful, enthralling portrait of the Quarryville native and elite athlete captures just what life is like being Johnny Weir. From his struggles with his coach and pressure to perform, to participating in fashion shows and photo shoots and meeting with his elementary-school teacher, Weir is funny, likable and often frustrated. He may reveal himself to be every inch the troublemaker — saying scandalous comments to the media or wearing inappropriate clothing at a competition — but he has the talent and the desire to perform. “Pop Star on Ice” suggests Weir is more than ready for his close-up, but this fun documentary also asks if he has the talent to back up his spontaneous and possibly self-destructive behavior. Fans of Weir will understand this skater better, while those who are unfamiliar will undoubtedly appreciate him after getting an eyeful of his antics here. Friday, July 10, 5 p.m., Prince; Saturday, July 11, 12:15 p.m., Ritz East 1

Featuring a raven-haired beauty named Lola racing through the city streets and against the clock, “And Then Came Lola” is a fun and funky homage to “Run, Lola, Run.” In this fabulous film, set in a beautiful San Francisco populated almost entirely by same-sex couples, the title character (Ashleigh Sumner) has to get photographs from her ex (Jessica Graham of “2 Minutes Later”) to her girlfriend Casey (Jill Bennett). Casey is giving them to her ex, Danielle (Cathy DeBuono), in hopes to land a job. And if first Lola doesn’t succeed, it’s try, try again.

Like the German film on which it’s based, “And Then Came Lola” is formatted as a triptych, with different scenarios and outcomes all mirroring Lola’s internal struggle to commit to her relationship with Casey — or not. Writers/directors Ellen Seidler and Megan Siler are smart — and sassy — enough to blend in lesbian-relationship angst (as seen in a series of direct-address “therapy” sessions), as well as fantasy scenes and animation, to concoct a delightful romp that also raises questions about how these various women care for and about each other.

They are aided immensely by the adorable Sumner’s star-making performance. She encounters her every obstacle with a palpable sense of determination and gusto that makes viewers root for her. Sumner is aided by uniformly fine work by the sexy supporting cast. Run, don’t walk, to this one. Saturday, July 11, 7:15 p.m., Prince; Sunday, July 12, 4:15 p.m., Ritz East 1

Harry (James Lance) is a reality-show producer who is living with Alex (Luke de Woolfson), a cater-waiter who really wants to be an actor. Lawrence (Leon Ockenden) is an actor on a TV show and dating William (Rocky Marshall), a gay dad who can’t fully commit to the relationship because of his needy young daughter. Meanwhile, Larrs (Benjamin Hart) is a hunk living off artist/gallery owner Tom (David Morris), and Louise (Georgia Zaris) is the token fag hag with the adorable straight (or is he?) boyfriend, Paul (Jeremy Edwards). “Mr. Right” introduces these characters and has them meet and talk and sometimes bed each other (chastely).

The dramatic centerpiece is an awkward dinner party where several of the relationships come undone, forcing everyone to take stock of their lives and decide if loving their partner is either a risk or a form of security, however false. Innocuous, for sure, one can take issue that the characters here are all pretty and pretty one-dimensional. Yet “Mr. Right” is less concerned with the viewer’s long-term relationship; it wants to give folks a good time for 94 minutes, which it does. Viewers will care about the characters, and be mostly satisfied with the outcome by the time the credits roll. Friday, July 17, 9:30 p.m., Prince; Saturday, July 18, 4:45 p.m., Ritz East 1