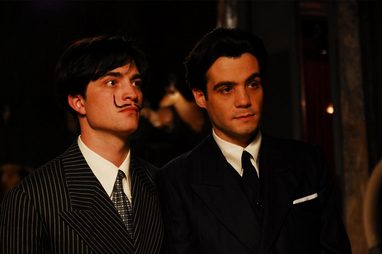 “Little Ashes” is an awful, artless film about the homosexual poet/playwright Federico García Lorca (Javier Beltrán) and his relationships with both the artist Salvador Dalí (Robert Pattinson) and the filmmaker Luis Buñuel (Matthew McNulty). With all of the depth and style of a Wikipedia entry, this torpid drama — it is hardly a proper biopic — opens in 1922, when an era of conservative morality held Spain in its grasp.

Federico is attending an art school in Madrid and becomes besotted with new student Dalí. And Pattinson, the heartthrob from “Twilight,” makes his entrance, dandily — a fop in poofy clothing. He looks uncomfortable and says his lines without the slightest bit of conviction.

However, Pattinson may be the sole reason the staggeringly bad “Little Ashes” is getting a theatrical release at all. Without the novelty of his ludicrous performance, this debacle would have likely received the purgatorial direct-to-video treatment it deserves. Yet even teenage girls and gay men who swoon over this slight — in both build and talent — actor will likely be disappointed with him here. Pattinson is utterly miscast; he plays the film’s most pivotal character without being the least bit interesting. His “crazed-artist” scenes are ridiculous, self-indulgent bits of posturing, and a big moment where he tells off his art teachers is more dull and embarrassing than audacious. But so is “Little Ashes.”

Nevertheless, Federico is infatuated with Dalí, and when the poet/playwright prays and confesses to having impure thoughts about him, it provides a moment of camp amusement. But this bit is followed by a scene of bad farce in which Dalí tries to arrange running into Federico and his friend Margarita (Marina Gatell) for reasons that are unclear. It is a sequence as painfully awkward as a latter scene in which Margarita, determined to seduce Federico, makes love to him while Dalí watches and masturbates to their frenzied humping.

“Little Ashes” is nothing but a collection of graceless moments. When Dalí attends a dinner party, he deliberately makes a spectacle of himself, spouting “shocking” — but in fact silly — lines about communal defecation and wanting to have an enema.

After Dalí’s curious bi-curious encounter, Luis Buñuel turns up and spouts antigay rhetoric before he discovers Federico’s same-sex lust. Dalí, meanwhile, flees to Paris, where “Little Ashes” offers its most unintentionally hilarious sequence: shots of bare female breasts and bullfighting intercut with can-can music and images of Dalí frolicking at the Moulin Rouge. Talk about surrealism!

“Little Ashes” is nothing if not surreal. Yes, Dalí goes all goofy — he is bald one minute and turning his mustache upside-down the next. He continues to act like an insufferable idiot. Pattinson’s accent is like his mustache — all over the place.

Then there is the bizarre sequence in which Federico sees Dalí and Luis’ avant-garde short “Un Chien Andalou” and gets offended. (He thinks the Andalusian dog of the title is a reference to him.) Actually, what is offensive is that the clips from “Un Chien Andalou” are shown out of order — ending (not beginning) with the famous eye-slicing moment. But then, “Little Ashes” damages viewers’ eyeballs long before this sequence.

In the film’s not-so-grand finale, Federico comes to his tragic end. (Because, of course, the maricón must die!) Tissues will not be necessary.

Throughout the revolting “Little Ashes,” there is much talk about revolution, but the film offers no real political thrust or agenda; just its impassioned characters talking about “No Rules!” and “No Limits!” But really, it’s just No Good! The film unfolds in a twee, old-fashioned style that does its fascinating subjects a great disservice.

While Beltrán tries to infuse his Federico with emotion, it comes off as hyperventilating and overacting. In contrast, McNulty hardly registers as Luis, except during his homophobic tirade.

But then, “Little Ashes” itself hardly registers. With any luck, this film will be completely forgotten. Although for anyone who suffers through this disaster, that is doubtful.