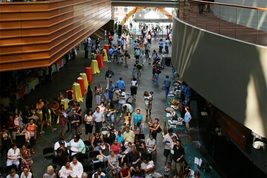 THEATER Birdy The Centre Theater presents the story of two Philly boys who go to war, then try to come back home physically and mentally, through April 26, 208 Dekalb St. , Norristown; (610) 279-1013.

Born Yesterday The Walnut Street Theatre presents one of America’s original screwball comedies about a business tycoon who goes to Washington, D.C., trying to break into the “special-interest” business with an ethically challenged senator, through April 26, 825 Walnut St.; (215) 574-3550.

Mack & Mabel The Players Club of Swarthmore presents the bittersweet story of a Hollywood romance between Mack Sennet, the mogul of silent film, and Mabel Normand, the girl he made a star, through May 9, 614 Fairview Road, Swarthmore; (610) 328-4271.

MUSIC classical Cellblock: Stories of the Eastern State Chamber Music Now presents a collection of works inspired by the famed prison, at 8 p.m. April 24-25 and May 1 and 3, Eastern State Penitentiary, Cellblock 7, 22nd Street and Fairmount Avenue; (215) 236-3300.

The Damnation of Faust The Philadelphia Orchestra presents Sir Simon Rattle leading a major choral-orchestral masterpiece by Berlioz at 8 p.m. April 29 and May 2 at Kimmel’s Verizon Hall, 260 S. Broad St.; (215) 790-5847.

OPERA L’enfant et les sortilèges/Gianni Schicchi The Opera Company of Philadelphia presents a double bill of short operas from the early 20th century that proves youngsters aren’t the only ones prone to acting up, through May 3 at Kimmel’s Academy of Music, 240 S. Broad St.; (215) 790-5847.