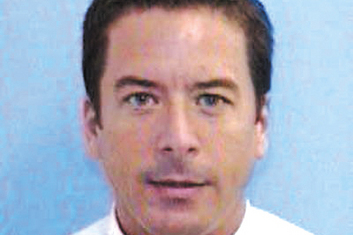 William F. Smithson says he’s facing a lifetime in prison not because he strangled to death a coworker during a rape attempt — but because he’s the victim of circumstantial evidence and a homophobic prosecution.

Last week, Smithson spoke to PGN during an hour-long interview at the George Hill Correctional Facility in Thornbury, where he’s being housed before he’s relocated to a state prison.

Smithson, 44, spoke out about the September 2006 strangulation death of his coworker, Jason Shephard, inside Smithson’s Tanguy Road home in Thornbury Township, Delaware County.

Throughout the interview, Smithson maintained his innocence and said authorities haven’t looked closely enough at the actions of another man in his house that evening, F. Bruce Covington.

“Let’s not forget the fact that there were three people in my house that night,” Smithson said.

But Smithson stopped short of accusing Covington of murder.

Covington, 58, a Narberth attorney, couldn’t be reached for comment. Authorities say Covington had no direct involvement in Shephard’s death.

But he’s been charged with bringing drugs into Smithson’s home a few hours before Shephard’s death, including crystal methamphetamine, and with making false statements to police.

His attorney, Steven C. Leach, said he had no comment for this story and stated Covington remains free on bail on drug-related charges filed against him in both Montgomery and Delaware counties.

Smithson said he feels “awful” about the events of Sept. 18-19, 2006, which culminated in Shephard’s death, and that he thinks about the tragedy every day.

“I’ve wracked my brain thinking, ‘Was I so messed up on drugs that I did it and can’t remember?’” he said. “But I didn’t have a scratch on me, and the prosecution said Jason had defensive wounds. He was 23 years old, much bigger and stronger than me. And I didn’t have a mark on me.”

According to the prosecution, Smithson lured Shephard into his home, slipped him the “date-rape” drug gamma hydroxybutyrate (GHB), then strangled him to death in the course of trying to rape him.

Smithson scoffed at the scenario as “absurd.” He said any drugs he shared with Shephard — and any sex the two men had together — were consensual.

Smithson said Shephard was bisexual, though his family from Shephard’s hometown of Cavalier, N.D., probably wouldn’t have known of his orientation.

He said Shephard willingly came to his home on Sept. 18, 2006, partly for the purpose of having sex — which the two men had also engaged in the day before, according to Smithson.

But Smithson said he had been tired that day, and the combination of drugs and alcohol caught up with him. He fell asleep before any sex took place between them, he claimed.

“The last thing I remember was Jason elbowing me and saying, ‘You’re passing out,’” Smithson recalled.

He said that when he woke up later that day, he discovered Shephard lying dead in his bedroom.

“I panicked; I thought he overdosed. All I knew was that I had a young man in my bedroom — dead — and I wasn’t thinking clearly.”

Smithson readily admitted he was guilty of misleading authorities — and Shephard’s family — into thinking that the victim was simply a missing person for two days.

“I take full responsibility for that,” Smithson said.

But he said prosecutors were blinded by the circumstances of the case and fixated on him as the killer without fully examining the actions of Covington.

“The prosecutors were more concerned about obtaining a conviction than uncovering the truth,” Smithson maintained.

Smithson said statements he made shortly after the incident regretting the calamity were misconstrued by officials as admissions of guilt — which he adamantly denies.

Two days after his death, Shephard’s body was discovered by police in Smithson’s basement, and Smithson was charged with a variety of offenses, including murder, kidnapping, administering intoxicants and abuse of a corpse.

In November, a jury convicted Smithson of first-degree murder but spared him the death sentence.

Smithson, upset with the guilty verdict, said he was grateful jurors spared him capital punishment.

He said jurors were influenced by a “homophobic” prosecution that emphasized aspects of his sexual orientation in a lurid and inflammatory manner.

“I was portrayed as a monster,” he said. “The jurors were shown sex toys and sex aids [from] my house, as if they had something to do with Jason’s death.”

Smithson also blasted prosecutors for questioning his character witnesses about their sexual orientation, apparently to diminish their credibility.

He said he regrets not testifying during the guilt phase of the trial, but said his attorneys advised him against doing so.

If he had testified, he said, prosecutors had threatened to call as a witness a jailhouse informer who claimed Smithson confessed to killing Shephard — with Covington’s help — during an argument with Shephard.

Smithson denied making such a confession, but said he preferred that the jurors not be exposed to the witness because of the possible negative connotations.

Smithson said his attorneys are planning to file an extensive appeal on his behalf in the hope the state Superior Court will grant him a new trial.

“I want a full investigation, and a fair trial based on the facts, not based on someone’s opinion of my sexual orientation,” he concluded. “I hope your readers can sympathize with me regarding the homophobic overtones and prejudices that were prevalent throughout my trial. I’ve got to remain positive and optimistic.”