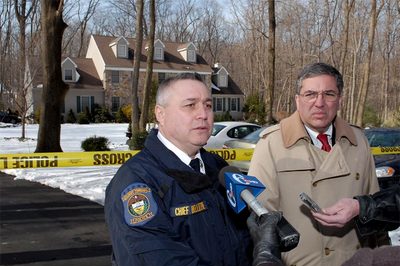 A quiet, upscale suburban neighborhood was teeming with investigators last week, seeking to piece together the murder-suicide of a longtime gay couple.

Police say that Joseph Lofft, 50, shot and killed his partner of 21 years, Jerry Rudman, 48, before turning the gun on himself in the couple’s Solebury Township home in New Hope.

A cleaning woman discovered the bodies around 9 a.m. March 5.

Rudman had been shot multiple times and the woman found his body in the garage.

Bellizzie said that after shooting Rudman with a Walther PPK .380-caliber semiautomatic handgun, Lofft attempted to clean the area and then took a shower, took medication and shot himself in the head with a .357-caliber Magnum in the couple’s bed.

Lofft had been arrested around 3 a.m. March 4 and charged with drunk driving after he crashed his car into a guardrail about two blocks from his home.

Police impounded his car and Rudman picked him up at the station.

Lofft, a pharmaceutical consultant, and Rudman, a global projects manager with GlaxoSmithKline, did not arrive for work later that day.

Zellis said there was broken and overturned furniture in the home, signaling a struggle.

“This was clearly a domestic disturbance at some point,” he said. “There was blood throughout the house.”

Bellizzie noted that police had previously been called to the house only in response to a security alarm.

“We had not gone to that location for any domestic disturbance,” he said. “The only time we responded there was for normal tripped-alarm calls, but for nothing else.”

Bellizzie noted that violent crimes are a rarity in the area.

“This is not a regular occurrence here,” he said. “Especially not in Solebury Township and the whole New Hope area.”

MSNBC reported that Lofft left a note for his mother telling her where his will was and asking that someone take care of the couple’s two cats.

The couple lived in the home for 10 years.