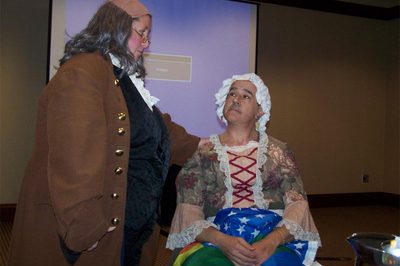 More than 100 organizers of LGBT pride events from along the East Coast will head to Philadelphia to take in the sights, sounds and stories of the City of Brotherly Love and Sisterly Affection during the 2009 Northeast Regional Pride Conference, an annual gathering of area pride directors, March 13-15.

NERP is a geographic subdivision of InterPride, an international association of LGBT pride organizers.

Franny Price, president of Philly Pride Presents, the host organization for the conference, said she expects about 125 pride coordinators who represent LGBT organizations from Maine to Washington, D.C., to attend.

Philly Pride Presents won the bid to host the 2009 conference two years ago, and Price said plans have been in the works for the event since then.

The conference is an opportunity for the representatives to network and learn what other organizations are doing, but it also gives the host city a unique opportunity to present its LGBT life to the visitors.

The organization decided to design the conference along the same lines as the Greater Philadelphia Tourism Marketing Corporation’s LGBT tourism campaign “Get Your History Straight and Your Nightlife Gay.”

“We want to showcase the history of Philadelphia, as well as the gay history of the city,” Price said. “[Philly Pride Presents] has been going to these conferences for 15 years, so we looked back at everything we liked and didn’t like and tried to incorporate all of that into this conference.”

Mayor Nutter will deliver the welcome address at the conference’s opening reception March 13 at City Hall. Beforehand, the participants will have the chance to ascend to the William Penn statue atop City Hall for a tour that is rarely open to the public.

On Saturday, participants will get a taste of Philadelphia with a trip to Pat’s and Geno’s for lunch, a gay-history bus tour with the obligatory Rocky run up the Art Museum steps and that evening’s banquet dinner, which requires guests to dress in colonial attire. The dinner, held at the National Liberty Museum, will feature historic reenactors Thomas Jefferson and Benjamin Franklin, who will speak about what gay life may have been like in the 1700s.

Throughout the weekend, attendees can also compete in the Gayborhood Crawl, during which they will be given a map of the Gayborhood and its hot spots and encouraged to collect as many signatures as possible from individuals at the establishments.

The conference will not be all fun and games, though; several workshops will address the possible issues and challenges of planning a pride event.

The “Spirituality and Pride” discussion, led by the Rev. Pat Bumgardner of the Metropolitan Community Church of New York, will examine the incorporation of religious communities into pride events, and “Growing Up in Pride” will address the inclusion of children and families.

“It’s My Pride, Too,” facilitated by Cecilia Brown, president of the Pro-Life Alliance of Gays and Lesbians, and Chris Alston and Michael Hinson of Philadelphia Black Gay Pride, will focus on communities that may feel marginalized by traditional pride functions.

“Some people in our community don’t understand why there are gay Republicans or pro-life gays and some don’t see the need for a black gay pride event,” Price said. “But the fact is that this is their pride, too, and sometimes these people may not feel welcome. So we thought it was important that they came and talked about why some people may feel rejected at times from some prides and from their own community.”

Participants will also have the chance to join in small roundtable discussions, where they can share their event-staging experiences and learn helpful tips from other organizers, as well as forge useful connections.

Price said the participants will have ample opportunity to explore the Gayborhood — the host hotel is the Alexander Inn and the workshops will be held at the William Way LGBT Community Center — and, unlike other NERP conferences in the past, the event will allow visitors to truly explore Philadelphia’s LGBT community.

“We’re going to show them the high points of the city rather than just having them come to the city for three days and stay in their hotel,” Volz said. “I think we’ll do significantly better than some other cities have.”