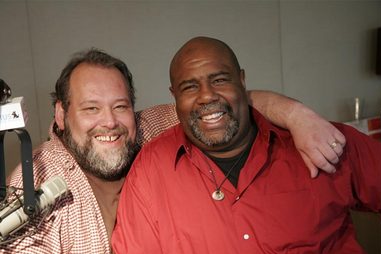 Listening to “The Morning Jolt” on OutQ Radio, the Sirius LGBT satellite channel, you wouldn’t suspect that hosts Larry Flick and Keith Price had never planned to be radio personalities. But the two are obviously naturals as they play the latest and greatest of music hits and dish on pop culture five days a week.

For Flick, who has been with the program and its various incarnations for five-and-a-half years, it took a while for all the right elements to fall into place to make the show what it is today.

“I always wanted to do a show that combined all the things that I love, which is talking about the news of the day, pop culture and music,” he said. “I’d been pitching the idea of bringing music onto the morning show in a more substantial way than we had been. Right now it’s about 50/50 talk and music. We’re in the second week of this new format. We’re test-driving a lot of new segments and playing with music, finding a balance between playing songs people recognize and taking advantage of the fact that I have a long history in music. Gay audiences tend to be tastemaker-driven. They like to be first. It’s a lot of music, but it’s also news and lifestyle topics — whatever is happening in the moment.”

Flick’s long history in music began in the ’80s as a travel assistant to bands like KISS and Power Station. He eventually landed a job as a writer and senior editor for Billboard Magazine, where he spent 14 years developing a reputation as a strong music journalist and contributing to magazines such as The Advocate, Vibe and Out.

Fairly impressive for someone who didn’t study any of these subjects in school.

“I’m not trained in radio,” Flick said. “I’m not a trained journalist. My degree is in theater and, before that, I was an artist.”

According to Flick, his unlikely transition to radio came just as his career in journalism seemed to be at a crossroads: He’d recently been laid off from Billboard.

“My mentor died and, a year after that, they hired a new editor-in-chief that decided to take the magazine in a new direction,” he said. “When they did that, I became redundant. I became a very expensive commodity. I had an enormous severance package to live off of for a while and I was planning a really nice summer off. But the opportunity to audition for the morning show on OutQ was presented to me about three weeks after I was laid off. I begrudgingly got up at 4 a.m., showed up and tried out not thinking I was going to get it. And I never stopped doing the show. A lot of the things that I have done in my work life have been pure coincidence.”

It was also coincidence that saw Price join the show on a full-time basis. The openly gay comedian was booked as a guest and things just clicked between him and Flick.

“When I walked into the room, it was an instantaneous connection,” Price said. “Larry and I became two big giant schoolgirls, going, ‘Oh my God. Did you see that? I love ‘All My Children.’ Truly it was kismet. People have likened the show, because it’s so irreverent, to Howard Stern. Howard and Robin get along just the same way that Larry and I do.”

Like Flick, Price never set out to be a radio personality, or a comedian for that matter. The idea of a career in comedy, and his relocating to New York, came about when he figured out that living in Texas and working in healthcare didn’t seem all that exciting.

“I left Texas at the age of 28, but believe me, for a good four or five years prior to that, it was my mindset,” Price said. “There was no way in 1994, even in Austin, Texas, as progressive as Austin was, I could be big, black, gay and fabulous. I just didn’t know where I wanted to go and I didn’t know what I wanted to do because I was [a] biology pre-med [student] and the plan was I was going to go to medical school. I was like, ‘You know, this medicine thing … I don’t know. I could do this but, eeww, this doesn’t seem like the kind of life that I’d want to spend the rest of my time doing.’”

Now Price splits his time between the radio and his comedy performances, which can be a balancing act considering stand-up comics usually keep vampire hours and morning DJs have to be up before sunrise. But Price said his name recognition gives him some flexibility in the competitive world of comedy clubs.

“Because of the show, it’s allowed me a lot more leeway to balance my time,” Price said. “It certainly had made my career far more interesting than it was three years ago, when nobody knew who the hell I was. I think the fact that I’m on the radio as an out gay person has allowed me a lot more notoriety and visibility both inside and outside of New York. I have my weekends to do things and, because of the status of being ‘headliner material,’ I tend to get to pick my days during the week if I want to do shows. Generally they are earlier shows. Most of the people that listen to the show are getting up at the same time as we are, so they are more inclined to see me at an earlier hour.”

Price’s experiences on and off stage can be seen in the documentary “Ebony Chunky Love: Bitch Can’t Get a Date,” which chronicles his one-man show and his struggles in the entertainment industry. The funny and candid look at Price’s career made the rounds at film festivals last year and debuted on Logo this month.

Price added that after 20 years of doing comedy and his recent success with the film and the radio show, he is no longer trying to be one of the biggest names in the business.

“My goals are not as broad because things have changed,” he said. “If you’d have talked to me three years ago, before I took the job [at Sirius], I would have said my goal is to be a headliner like Lisa Lampanelli or Dane Cook. I wanted to have that notoriety. But as you do things like this job, you start to temper that whole idea of what that kind of notoriety can bring to you, because even in this small sphere, there’s been a lot of strange things that I wouldn’t have to deal with if I was the comic I was three years ago. It’s not a fear of success. I just want to have as much of my life as I can because I’m too old now to be selling out for stupid stuff.”

Flick said he was also ready for a change when the opportunity at Sirius fell into his lap.

“I had written every single day of my life for 14 years and I didn’t feel like typing anymore,” he said. “I felt like talking.”

For the time being, Flick and Price are content to focus their energies on “The Morning Jolt,” where they cover not only the latest in gay culture, but also the hottest topics in mainstream entertainment.

“We have all kinds of celebrities, rocks stars, film directors and actors,” Flick said. “You name it. It’s really been amazing how supporting the entertainment industry has been for the show. What’s great is it’s not the stereotypes. For example, I just recorded an interview with Duff McKagan from Velvet Revolver and he was just as excited to do this show as he was to do any of our rock-music-channel shows. It ranges from Lilly Allen and Kelly Clarkson to politicians and actors. It’s a pretty wide range, and they understand the clout of the LGBT population.”

In keeping with the scope of the show, Price said his dream guests are as eclectic and A-list as they come.

“In my crazy fantasy world, at least before he dies, I would love to see Mel Brooks in the room with us,” he said. “I’m a big Mel Brooks fan. And because I’m still 16 inside, I want to meet Beyoncé before she gets too old and uninteresting.”

(He’d better hurry on both fronts, then.)

Flick is optimistic about the new direction of the show and its future, which is admirable considering many publications are forecasting the demise of Sirius, citing the company’s debts, extremely low stock prices and the amount of money it is shelling out for stars like Howard Stern and Martha Stewart.

Flick said that from where he sits, Sirius isn’t about to take a dive any time soon.

“We’ve been doing our thing and thriving,” he said. “When I was at Billboard, I was very anti-Internet because I worked for a print publication. I didn’t like the idea of new technology supplanting how I was expressing myself and earning my living. And again, that’s old-fashioned thinking. I think that any new medium needs time to work out their kinks. As far as I see, satellite radio is doing well. We’re in a downward economic time but we’re racking up subscribers. We have what people want. We gauge it anecdotally. We get a lot of phone calls. When the phones are lighting up, we assume that it’s going well.”

Flick added that any of Sirius’ supposed business problems are a symptom of the perceived declining music industry, which he has been keeping a watchful eye on since his days at Billboard and claims that it’s all hype.

“If you talk to people who understand the digital age of music and the unique ways of bringing music to people who want it, music is thriving,” he said. “There is more great music out there than ever. The problem isn’t the decline of the music business as much as it is the decline of the old way of doing business. People have to let go of things. People are afraid of change, by and large. I watched the beginning of the digital age when I was an editor at Billboard and I remember interviewing a lot of executives that said, ‘This is never going to take off because the way we do things is the right way.’ And a lot of those guys are unemployed now. So the decline of music is vastly overestimated.”