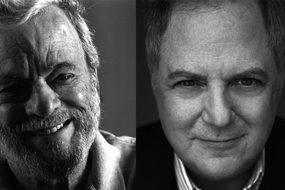 Musical-theater enthusiasts are sure to rejoice on Feb. 21, when they get the rare opportunity to see one of Broadway’s legendary composers talk candidly about his career.

Out composer and lyricist Stephen Sondheim is set to share the stage with one of his greatest proponents, New York Times columnist and former theater critic Frank Rich, for a live, unscripted dialogue reminiscing about his impressive six-decade career at 8 p.m. Feb. 21 at the Kimmel Center’s Verizon Hall.

Sondheim is considered one of the most influential figures in modern musical theater, whose long and fruitful career has included classic productions like “West Side Story,” “Gypsy” and “Sweeney Todd,” as well as taking home numerous Tony awards, Grammys and a Pulitzer Prize for his songwriting.

Rich spoke fondly of his first encounter with the legendary theater figure, who tracked him down while he was still a senior in college and just starting his career as a critic.

“I had reviewed the original production of ‘Follies’ for my school paper in Boston when it was on its way to Broadway and somehow someone got him a copy of the review,” Rich said. “He liked the review in the sense that I understood what they were trying to do in that show. He wrote me a letter and asked to meet me. So I had a drink with him then. That was 1971. Of course, I was a kid and completely in awe of a hero of mine since childhood. I was intimidated, although he was perfectly pleasant.”

Rich added that he didn’t become friends with Sondheim until after he stopped being a drama critic, which was probably for the best since his assessments of the composer’s work weren’t always overflowing with glowing praise.

“I wasn’t in touch with him at all the whole time I was a drama critic or, for that matter, friends with anyone I was reviewing,” Rich said. “I did not like the original production of ‘Merrily We Roll Along.’ I was mixed about ‘Into the Woods.’ I didn’t like the original production of ‘Assassins.’ But during that whole period, we weren’t in communication anyway. We talked about it in the years since, but not at the time.”

Rich said their professional relationship really got going when they were asked to participate in a conversation event in 2002 when the Kennedy Center presented a Summer Sondheim festival. At the time, Rich had already sat down with Sondheim for an article for the Times.

“What prompted that, and what really started my friendship with Stephen, is that when he turned 70, New York Times magazine asked me if he would sit for an interview on that occasion,” Rich said. “He agreed to the interview and it ran on the cover. It started a conversation that, I might add, has never ended to this day. Someone who runs an art and lecture series in Portland, Ore., wanted to have Stephen talk to someone on stage and we ended up doing it in March 2008 and that led to other conversations.”

Rich said that while the conversations are unscripted and each event is different from the others, subjects like Sondheim’s legendary collaborations, creative inspirations and his theatrical and cinematic résumé always come up.

“There are certain things that you want to talk about in some form or fashion, whether it be ‘West Side Story,’ ‘Company’ or ‘Sweeney Todd,’” he said. “But I mix up the questions. It’s unscripted and, while there’s some overlap, the idea is to make it fresh each time. It’s light-hearted. He’s a very articulate artist and he’s very candid about his work and the collaborators he’s worked with, going back to the beginning of his career. So my aim is to elicit his insights and have him talk about the craft, what he feels about the shows in retrospect, what he would do differently, what he’s proud of, what went wrong and what went right. He talks about the many people he’s worked with, which range from Jerome Robbins and Leonard Bernstein to Harold Prince, Patti Lupone and Bernadette Peters. I try to cover a wide range of his career. Sometimes we’ll take questions from the audience at the end. He’ll field those too. Sometimes I might.”

Very few people in theater have had the wealth of experiences that Sondheim has had, so it is no surprise that these events tend to draw the full spectrum of theater scholars and fans looking to pick his brain.

“There is a remarkable mixture of people who are longtime fans of his and longtime fans of American musical theater, which in my view, he’s the leading living artist,” Rich said. “What’s fascinating too is that there’s always young people too. They study his work and seriously perform it. His work has tremendous life away from the main venue of Broadway because there’s such a large repertoire that he produced and all of it is in production somewhere at any given moment. So there are all these young people who are discovering everything from ‘Into the Woods’ to ‘A Funny Thing Happened on the Way to the Forum.’”

Rich said that connecting with the next generation of talent trying to make their mark in the world of theater is important to both himself and Sondheim, as both are very aware that the business of getting a production off the ground is much more difficult that when Sondheim started out.

“I think we’re in broad agreement that there are some very talented young songwriters out there,” Rich said of the latest wave of theater. “Some of them have been having some success in New York but the economic situation is perilous. Of course it’s now been compounded by what’s going on in the actual economy. In the days when Stephen began, a producer like Harold Prince could gather together several hundred small investors and put on a show for a relatively small amount of money fast and informally over and over again from season to season. Now it’s so costly. Everything becomes an enormous investment. It’s very slow to get on and the risk factor is so great that the producers don’t want to take a risk on something that isn’t a known title. They don’t want to take risks on the next young Sondheim, whoever that may be.”

Rich added that even someone with the level of success and recognition that Sondheim has can’t exist in a creative vacuum, which is why he works so hard to stay on top of his craft.

“Any artist working the theater has to be a collaborator and deal with the realities,” Rich said. “The days when you had 24 instruments on the pit have been gone for some time. He’s working in a medium where there are collaborators, but what makes him brilliant is, through every fashion of musical theater, he has stuck to what he wants to do and kept experimenting right through [2008’s] ‘Road Show.’ He’s always on his own route.”

The route has seen Sondheim’s work brought to life on TV and movie screens as well as the stage. The most high-profile and successful adaptation of Sondheim’s work in recent memory is 2007’s “Sweeney Todd: The Demon Barber of Fleet Street.” Rich said Sondheim doesn’t try to inspire big-screen versions of his work as he’d much rather be inspired by the art of movie making.

“He likes some of them and doesn’t like others,” Rich said of films based on Sondheim’s work. “Movies have been an enormous influence on him. Basically the theater does not influence movies. They buy properties, whether it be Tennessee Williams, Rodgers and Hammerstein or Sondheim.”

For Rich, these conversations with Sondheim are a fun way to return to the world of theater criticism, which he left in 1994 to become a New York Times op-ed columnist. Since then, he has written about culture and politics for many other publications and his own books.

“I’ve never missed criticism for a minute,” Rich said. “I did it for 20 years. I was a movie critic for seven years, then spent 13 years as the Times’ drama critic. I left at the end of 1993. But I remained utterly passionate about the theater. I would say they are twin passions. In a weird way they always have been. I grew up in Washington. Early in my career I wrote about politics and then put it aside as my career as a critic took off.”

In Rich’s most recent effort, 2006’s “The Greatest Story Ever Sold: The Decline and Fall of Truth in Bush’s America,” he examined the spin campaign manufactured by the Bush administration through its eight-year reign, covering everything from the terrorist attacks of Sept. 11, 2001 to Hurricane Katrina.

It turns out that criticizing theater and the political system have some striking similarities: Despite the wealth of information readily available to the general public, people sometimes patronize the wrong productions.

“The stakes are much lower in popular culture,” Rich responded to PGN’s attempt at witty observational humor. But he did allow that there is sometimes a large gap between what is critically successful and what is fiscally successful in the world of theater and politics.

“I think that the influence of critics and political columnists on events is not large,” he said. “When I collected my theater reviews in a book in the late 1990s, I made a list in the back of all the shows that I had raved about that failed and all the ones that I had not liked that became hits. And that’s true in the commercial arena of American culture. There’s very little correlation between what’s on the New York Times best-seller list and what books get good reviews.”

Rich said with a new political administration in place, he is trying to figure out what to write about next.

“It’s not beyond the realm of possibility that my next book might deal with a cultural subject like my love of theater,” he said. “I just haven’t decided yet. I’d like to do a book that is not about politics.”