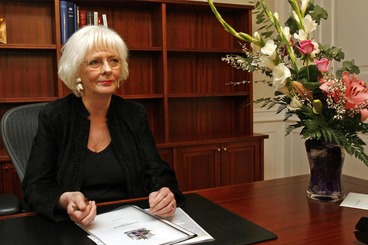 Earlier this week, Iceland swore in its first openly gay head of government — as well as its first female leader — when the new Social Democratic Alliance chose Johanna Sigurdardottir to be prime minister.

While Norway’s finance minister Per-Kristian Foss, who is gay, was that country’s acting prime minister for a brief period in 2002 while both the prime minister and foreign minister were traveling abroad, Sigurdardottir is the first LGBT person to be chosen for a full term as head of government.

Sigurdardottir entered politics through union activism as a flight attendant for IcelandAir. She became minister of social affairs in the outgoing cabinet for the Social Democratic leader, former prime minister Geir H. Haarde.

Haarde stepped down from Iceland’s highest political seat after the nation entered financial devastation and political unrest in fall 2008.

Sigurdardottir’s stint as prime minister may not last very long. The government forming under her party is required to govern only through April 25, when an election must take place.

Sigurdardottir said one of her first acts as prime minister will be to “change the leadership of the central bank.” After Iceland’s financial collapse in October, the nation was forced to seek a $10-billion bailout from the International Monetary Fund and other countries.

A jury recently found a 25-year-old man in the Bahamas not guilty after he claimed a man he killed made sexual advances toward him.

Frederick Green-Neely told a court in Nassau that he stabbed Dale Williams three times as he tried to flee Williams’ home.

The defendant said that Williams, the brother of a prominent local politician, invited Green-Neely into his home in February 2004. He claimed Williams revealed he was sexually attracted to Green-Neely and tried to grab him. Before fleeing the scene, Green-Neely stabbed Williams.

Prosecutors argued that the defendant had used excessive force, but the jury backed Green-Neely.

“This man deserves to go home to be with his family,” McPhee said. “The death, we are saying, was justified. Show the nation you don’t impose yourself on somebody, because one day you just might meet the wrong person.”

Green-Neely was acquitted of murder.

The case is an example of the “gay panic defense,” which allows a person charged with murder to claim that he was driven into a state of violent temporary insanity by a sexual advance from the victim.

There is also no equivalent defense relating to heterosexual encounters.

The defense is most frequently used in the United States, particularly in areas where homophobia is widespread.

In the U.K., where it is also referred to as the “Portsmouth defense,” the government holds that “The fact that the victim made a sexual advance on the defendant does not, of itself, automatically provide the defendant with a defense of self-defense for the actions that take place.”

The Bahamas is one of 14 British Overseas Territories, which are under the sovereignty of the United Kingdom, but not considered part of the U.K. itself.

A recent report issued by the Irish government on Feb. 2 found that nearly 20 percent of LGBT Irish citizens have attempted suicide and one in three has self-harmed at least once. It also found widespread physical attacks and rampant school bullying toward the LGBT population.

The report, “Supporting LGBT Lives: A Study of the Mental Health of Lesbian, Gay, Bisexual and Transgender People,” is the largest study into LGBT mental health ever carried out in Ireland.

The report’s authors said that the study clearly shows “the negative effects of stigmatization, harassment and discrimination on LGBT people.”

Twenty-five percent of respondents said they had been physically attacked because of their sexuality and 40 percent had been threatened with violence.

The Children’s Research Center at Trinity College and the School of Education at University College Dublin conducted the study.

An Austrian pastor who has been quoted as calling Hurricane Katrina God’s punishment for sin in New Orleans is being promoted to the rank of bishop.

The Vatican announced Jan. 31 that Pope Benedict XVI has tapped the Rev. Gerhard Wagner, 54, to be auxiliary bishop in Linz, Austria.

Wagner has served since 1988 as pastor of a church in the Austrian town of Windischgarsten.

In 2005, Wagner was quoted in a parish newsletter as saying that he was convinced that the death and destruction of Hurricane Katrina earlier that year was “divine retribution” for New Orleans’ tolerance of homosexuals and laidback sexual attitudes. The newsletter also quoted Wagner as saying that Katrina destroyed not only nightclubs and brothels in New Orleans, but also abortion clinics.

The leaders of the Roman Catholic, Ethiopian Orthodox and Protestant churches have called on the government of Ethiopia for a constitutional ban on homosexuality.

Currently the constitution makes no mention of homosexuality, but male homosexual behavior is illegal in the country and carries a penalty of up to five years’ imprisonment.

Although there is no provision under Ethiopian law for lesbianism, there is the presumption that the punishment would be the same.

Christians make up around 63 percent of the country’s population. Muslims make up almost 34 percent.

According to Sonic Casuist of ETHIOGLBTI, a gay-rights group in Ethiopia, homosexuality is still perceived as taboo and nonexistent in that country, and many homosexuals are still in the closet.

“It is hidden, no one is out,” she said. “The general population would like to claim that it does not exist.”

The first openly gay person to become a High Court judge in Australia has retied after 13 years on the bench.

The Honorable Justice Michael Kirby was praised at a farewell ceremony in Canberra on Feb. 2. He was replaced by Justice Virginia Bell Feb. 3.

“You will hold a special place in the history of this Court,” said Australia’s Attorney General Robert McClelland. “You have been tagged the Great Dissenter, but in reality you have played a vital part in the development of many areas such as the freedom of political communication, a right you described as belonging ‘as much to the obsessive, the emotional and the inarticulate as it does to the logical, the cerebral and the restrained.’ Unlike one or two politicians who fall into the first category, you will be remembered as the Great Communicator.”

Kirby paid tribute to his colleagues and his partner of more than 40 years, Johan van Vloten, and said he still had a “naïve” faith in the Australian legal system. He is legally required to retire by March 2009 when he turns 70.

He stated he did not believe that prejudice would be eradicated in his lifetime, and he urged Australians to recall the formerly racist nature of their society, and realize that progress can be made.

He added that a fear of difference was behind prejudice against the LGBT community.