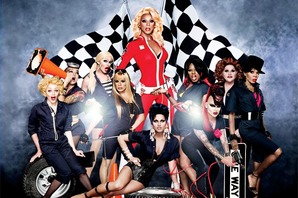 “I love mentoring the girls and seeing what the new talent is out there,” drag superstar RuPaul said about her new show, “RuPaul’s Drag Race. ”

The international celebrity and recording star said she hasn’t had this much fun doing a TV show in quite some time.

“The production is the same production company that did my show on VH1,” she said, referring to her short-lived talk show back in the day. “Professionally, it was the most fun and the most beautiful working situation I’ve ever been in, and the same is true on this show. Everyone in there wanted to be there. Everyone was so excited. To work on something that is a celebration of color, beauty, love and music was just a joy for everyone.”

On “Drag Race,” RuPaul hosts, mentors and judges drag contestants as they prepare for each challenge, ranging from photo shoots and fashion designing to makeovers and performing.

Of course, the show bears more that just a passing resemblance to another high-profile reality show where contestants try to out-glam the competition with a generous sprinkling of catty behavior. But RuPaul isn’t naming any names.

“I think the show honestly is a bit of everything,” she said. “That’s the nature of drag. Drag is allowed to borrow and have nods at every pop-culture entity. Drag is a sampling of the whole world. In its essence, drag is there to remind the culture to not take itself seriously. We poke fun at everything and always have throughout the ages.”

“Drag Race” may have some elements of shows like “American Idol” and “Top Design,” but RuPaul is beating around the bush with what is clearly the show’s main inspiration. So we just had to come out and ask if “Drag Race” is aimed squarely at “America’s Next Top Model.”

“Everyone brings that up,” she said. “Everyone asks me about it. Taking aim at that show? We’re taking aim at every show.”

Then we just had to ask: “So then, is everything cool between you and Tyra?”

“Still cool? Like we’re friends or something?” RuPaul answered with a chuckle.

This won’t have been the only time PGN made RuPaul laugh out loud. But more on that later.

As reality shows go, “Drag Race” is about as classy as you can get and still be fun to watch. Or is it the other way around? Let’s just say it is heads, shoulders and wigs above your average show.

The idea for “Drag Race” had been bouncing around inside RuPaul’s frosted afro wig for a while, as she mentioned it while promoting her excellently trashy exploitation movie “Starbooty” well over a year ago. She said it took a while to get the show going.

“It takes a long time for all of that stuff to come around,” she said. “We shot that show in August and it will make its debut Feb. 2. I guess in the big picture, it’s not that long, but I’ve been sitting on a secret for a long time and I can’t wait for everyone to see it.”

Compared to other reality shows, “Drag Race” lives up to its namesake with a quick and limited run of episodes, which is kind of sparse considering the number of hopefuls that auditioned for it.

Unfortunately, there is also no hot-mess audition footage à la “American Idol” included on the show. (And yes, we are dropping hints for the inevitable DVD release.)

In all seriousness, it is obvious the show means a lot to RuPaul, who said popular culture has been sorely lacking the art of drag for some time now.

“In the past eight years, drag has really gone underground,” she said. “In times of fear in our culture, gender exploration always goes underground. People are afraid of that, especially in times of fear, which we’ve experienced politically, socially and culturally in this country. To bring drag back from the underground, I wanted to show young girls with a new aesthetic of drag and a fresh idea because we’re really introducing drag to the mainstream again for the first time in eight or 10 years.”

RuPaul said the recent leadership change in the nation should make the environment ripe for drag’s push to the forefront.

“I think drag will go more mainstream,” she said. “Art, love, beauty, everything that has to do with expression is going to be opened up and blooming. It happened before where everything got shut down, but that is changing.”

She added that “Drag Race” aims to illustrate that drag shouldn’t just be associated with fringe personalities.

“It’s very easy to do, putting it in that box. People feel more comfortable with that than seeing it as something that we all do on some level. I say famously: You’re born naked and the rest is drag. A lot of people have a hard time accepting that because basically they’d have to deconstruct their own image of themselves and rebuild it. A lot of people don’t have the psychological tools to do that. It’s a daunting task.”

How true. If someone wants to be a model, she can go to modeling school. And people can take lessons to become more musically adept or learn how to dance. But what avenues exist for aspiring queens?

“It takes time,” RuPaul said. “They have to do amateur nights and then hopefully join the cast of a show. Hopefully in the town that they live in, there’s a drag venue or community because a lot of places just don’t have it. It takes time and it takes diligence. But there is no school for it.”

Looking at the show’s contestants, it’s obvious they all have their act down. RuPaul said the nine contestants on “Drag Race” are all seasoned practitioners of their craft.

“The girls who were chosen for the show are all working showgirls, so they know how to put on a show,” she said. “We’re really looking for a girl who can really become America’s next drag superstar and fill my shoes. So these girls are very confident. To do for a profession something that our culture thinks of as subversive, dark-sided and just plain wrong takes a lot of courage. It takes a lot of chutzpah. These girls already have what it takes to overcome. These are not amateurs. These are girls who know who they are and they know what they are doing.”

“Drag Race” covers a lot of drag ground, from ultra-glam practitioners all the way to the strikingly bold and punk-styled queens. The show also portrays the contestants outside of their drag personas, RuPaul included. RuPaul said that seeing the extent of their transformations is important to the show.

“I listen to Allen Watts tapes before I go to bed,” she explained. “He’s a philosopher from the 1960s and early ’70s. He introduced the Tao and Zen Buddhism to the western world. One of the things he talks about is that there is no inside without an outside. You can’t describe who you are unless you describe the environment, the outside of you. A big part of drag is the mind behind the image. We wanted to show that. We wanted to show these girls as people. It allows the audience to see themselves more clearly. There is always at least two sides to every story.”

That’s not to say the show gets all Oprah-like in its intentions. This is still a reality show with prizes at stake, such as $20,000 cash, a supply of M.A.C. cosmetics and a feature photo spread in Paper magazine. So while the relationships among the contestants start out cordial enough in the first episode, it isn’t long before the press-on claws come out.

“As contestants get eliminated, the stakes are higher and it does get a little reality-show-like,” RuPaul said. “For the most part, these girls are very respectful. They’re professionals and they know what’s at stake. They know that we are looking at every aspect of their personality because that is part of the competition. My personality has allowed me to become a household name and I think part of that has to do with my good nature. You know, I’m not always good-natured. I’m a human being. I think they were mindful of how they behaved because they knew that they were representing and they would have to represent if they won the crown.”

RuPaul also said that at least one contestant slipped into bitch mode on the show.

“She got a lot of heat from the judges because of it. We all understand. You live long enough, you understand that when people are insecure and they feel threatened, a lot of times they react in a way that seems like they’re being disrespectful. I know I’ve done it. One of the girls in particular has to be put in their place.”

Which brings us to the second time PGN gets a hearty cackle out of RuPaul. We foolishly, in the interest of equal time, asked if there was any talk of doing a drag-king version of the show.

“No, there hasn’t been any talk of that,” she said, laughing long and hard.

“That’s hilarious. It’s a possibility that it could come around, but right now, we’re celebrating the feminine.”