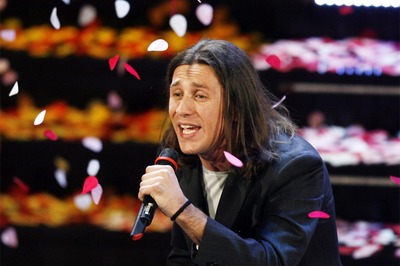 A singer who has penned a song about a man who used to be gay is generating controversy as one of the planned acts headlining the Sanremo music festival/contest in Italy next month.

The male artist Povia, competing for Best Song, has penned “Luca Was Gay.”

The Sanremo music festival was established in 1951 and has been cited as the inspiration for the Eurovision Song Contest.

Povia, 36, from Milan, has angered gay-rights groups because his song implies homosexuals can be “converted” to heterosexuality.

The president of Italian gay-rights group Arcigay, Aurelio Mancuso, does not find this a surprising turn of events in light of Povia’s recent statement in a magazine article: “[I] had a gay phase, it lasted seven months and then I got over it.”

He also said that Povia claims to have two friends that he has “converted” to being straight.

Previously, Povia won the Sanremo festival with a song about marriage, and the Vatican has been accused of overtly interfering with the event.

Mancuso believes that “Luca Was Gay” refers to Luca Tolve, who says he was “cured” of his homosexuality at the hands of controversial Catholic American psychologist Joseph Nicolosi.

Nicolosi works for the National Association for Research and Therapy of Homosexuality, whose mission statement says the group “upholds the rights of individuals with unwanted homosexual attraction to receive effective psychological care, and the right of professionals to offer that care.”

A Facebook protest was launched on Jan. 13 to put pressure on organizers of the music festival to pull Povia from the lineup.

Arcigay stated that if this song is included in the annual festival, the group will conduct protests that will be “extremely strong, noisy and organized.”

Italian politician Luca Volonte of The Union of Christian and Centre Democrats has rebuffed calls from Arcigay to withdraw the song from the concert as “a clear attempt at discrimination and censorship.”

A mother in Vancouver, Canada, has expressed outrage after taking her 13-year-old daughter to American Apparel and finding a display of magazines with homoerotic images.

Trina Campbell and her daughter saw Butt magazine sticking out of a backpack included on a display inside the store. She pulled the magazine off the display and flipped to a two-page spread of two men having sex.

“I don’t think this is something that the average person wants to see unless they’re ready or going out of the way to see it,” she said.

When she complained to store managers, however, she was told that American Apparel headquarters decided to put the magazine in the display. Staff members said they sell the titles only to those with proper ID showing that they are 18 or older.

A gay couple in South Africa was allegedly told they could not get married because their relationship was “not normal,” even though same-sex marriages are legal in the country.

Alexander Bruce, 25, and Jaco Van der Walt, 19, had decided to marry after being together for a year and had gone to the Home Affairs Office for an initial appointment on Dec. 17.

But when they arrived at the Germiston Home Affairs Office on Jan. 2, they claim an official laughed at them and then refused to marry them.

After speaking to a more senior member of staff, the official returned to the couple and said the Germiston Home Affairs Office could not accommodate same-sex marriages.

“I spoke to the supervisor myself and he told me that I should go to the Alberton Home Affairs office,” Bruce said. “The supervisor did not treat us with respect at all; he was quite rude to us.”

“I was so excited about getting married and was really disappointed when we couldn’t go through with it,” Van der Walt said.

Home Affairs claimed the marriage did not take place because there was no record of the couple’s appointment on Dec. 17.

The two men now plan to marry at the Alberton Home Affairs Office and hope to take legal action.

South Africa is the only country in Africa that has legalized same-sex marriage.

An HIV-positive grandfather from Melbourne who preyed on gay men and tried to infect them with the virus has been sentenced to jail.

Michael Neal, 50, was convicted in July of 15 charges, including attempting to infect a person with HIV, rape, reckless conduct, endangering a person and procuring sex by fraud.

Judge David Parsons sentenced him on Jan. 16 to prison for 18 years and nine months.

During his trial, the court heard how Neal picked up his lover from the doctor in December 2002 and was confronted about his HIV-positive status.

“I said, ‘I can’t understand how I could have returned a positive result,’ because [Neal] was the only one I’d barebacked with,” the man told the court.

He claimed that Neal had then said: “It’s better to get it from someone you know out of love than a stranger and to not know.”

After a police investigation, Neal was arrested and charged with numerous crimes, including two counts of intentionally infecting a person with HIV.

The six-week trial, which ended with a mixed verdict, found Neal not guilty on two counts of deliberately infecting a person with HIV but guilty on 15 other counts.

During the trial, prosecutor Mark Rochford said Neal had set out to infect as many people as possible with HIV to serve his own needs and fulfill his desire to have unprotected sex.

He said that Neal also told a number of his sexual partners that he wanted to make others HIV-positive so that he could increase the amount of people he could have unsafe sex with.

Some of the people he told made complaints to the Department of Health, and a file on Neal was opened in 2001.

By then, Neal had already begun attempting to infect his victims with HIV, and visits from government officials warning him to practice safe sex made little impression.

A series of written warnings from the health department also failed to curb his behavior.

Throughout the trial, Neal’s lawyer, George Georgiou, maintained that Neal genuinely did not believe he was able to pass on the HIV virus because of his undetectable viral load. Then, during the pre-sentence hearing, Georgiou said risky sexual behavior among gay men was commonplace.

Parsons said he had “little sympathy” for Georgiou’s reasoning.

Two leading gay organizations have joined forces to launch the first international network for young activists to work together.

The site will allow members to share their experiences, ideas and expertise, and to work together to solve problems and run projects.

“This will create a global conversation about LGBT rights, allowing young people to make contact and work together in an international fight for respect,” said Nanna Moe, IGLYO board member and communication officer. “This project is just part of IGLYO’s venture beyond Europe. The list is very much in line with IGLYO activities this year, since it is the 25th anniversary of IGLYO, which we are going to celebrate with a reunion and huge conference with international guests in Amsterdam in July.”

Individuals can join the list by becoming members of an e-mail group, which is moderated for safety. This feature could be of significant importance for members, especially those who live in countries where LGBT rights are not recognized.

The prosecution of Arash and Kamyar Alaei, who have been held in prison since June 2008, has raised an outcry among international human-rights groups. The Alaei brothers and two others were tried in a closed-door trial in December.

The four men were convicted of recruiting dozens of others and planning to recruit more Iranian doctors, university professors and scientists to provide information to the U.S. on Iran’s infrastructure and civil defense.

“They aimed at creating social crisis, street demonstrations and ethnic disputes,” the report quoted the general director of the counterespionage section of Iran’s Intelligence Ministry as saying, without providing his name.

He said the CIA spent some $32 million on the plot and accused the U.S. of stationing intelligence agents in neighboring countries, such as the United Arab Emirates, Turkey, Kuwait and Azerbaijan.

The Alaei brothers’ lawyer was not immediately available for comment.

The doctors have run HIV/AIDS treatment and prevention programs in Iran, focusing particularly on at-risk sectors like prostitutes and drug users. They have also held training courses for Afghan and Tajik medical workers.