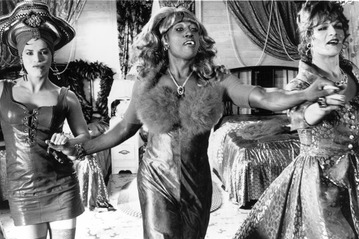 We all know that Hollywood loves a good (or sometimes bad) cross-dresser, but a new documentary is out to explore why such gender-bending roles have always been so popular.

Produced for the Starz Network as part of its Starz Inside series, “Ladies or Gentlemen” was inspired by Jean-Louis Ginibre’s critically acclaimed book of the same name, and takes viewers on a journey through some of the most attention-grabbing and talked-about cross-dressing performances in Hollywood history.

With acclaimed filmmaker John Landis (“The Blues Brothers,” “Trading Places” and “Coming to America”) producing the project and superstar drag queen RuPaul narrating, “Ladies or Gentlemen” is a well-put-together documentary, featuring commentary from the likes of columnist Michael Musto, actor Tim Curry and filmmaker John Waters, to name a few.

“Ladies or Gentleman” explores the roots of cross-dressing in film, tracing it back to ancient Greek theater, where women weren’t allowed to perform on stage and men had to play the roles of both sexes.

“Ladies and Gentleman” also explores the concept of cross-dressing as a plot device. Most of the time, cross-dressing in a film is a means to an end for a heterosexual character. It’s perfectly acceptable for Robin Williams to assume the role of Mrs. Doubtfire to spend more time with his children. It’s OK for Dustin Hoffman to cross-dress in a last-ditch effort to make it in the world of acting in “Tootsie.” It’s fine for the Wayans Brothers or Martin Lawrence to dress as women in movies like “White Chicks” or “Big Momma’s House” because they are defending the law.

The documentary also dives into the darker side of the way cross-dressing is depicted on film. When not used for comedic effect, cross-dressing is used as a symptom of the character’s antisocial behavior in film like “Psycho,” “Dressed To Kill” or “The Silence of the Lambs,” where the villains are always homicidal maniacs with gender-expression issues.

Somewhere in the middle of these extremes, “Ladies or Gentlemen” is a bit fuzzy in its intentions. Despite its critique of Hollywood for using cross-dressing as a comedic foil or the hallmark of a deranged mind, “Ladies or Gentlemen” doesn’t spend a lot of time examining the space in between. It doesn’t take the time to highlight films where cross-dressing is just something a normal character does as a form of self-expression.

At 60 minutes in length, the time constraints might have been a factor, but the documentary could have spent less time on films like “Mrs. Doubtfire,” “Tootsie” and “She’s The Man” and given more than just a casual glance at deeper films like “The Adventures of Priscilla, Queen of the Desert,” “Boys Don’t Cry” or “The Crying Game,” which are barely mentioned.

To its credit, “Ladies or Gentleman” devotes a respectable amount of time to the impact made by the careers and works of stars such as Divine (“Hairspray” and “Pink Flamingos”) and androgynous film-and-fashion icon Marlene Dietrich. It also does a fine job highlighting eccentric cross-dressing performances like Tim Curry’s role in “The Rocky Horror Picture Show” and Johnny Depp in “Ed Wood.”

“Ladies or Gentlemen” is a worthwhile effort on the surface — informative to someone with only a basic knowledge of the topic — but could have benefited from more time to explore the subject matter and a more cohesive sense of purpose.

“Ladies or Gentlemen” premieres at 10 p.m. Jan. 20 on the Starz Network. For more information, visit www.starz.com.