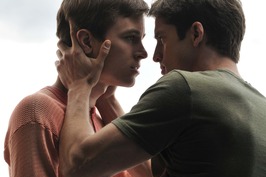 “I doubt that there will ever be any closure, but at least I have the satisfaction of knowing that it’s never too late to right an injustice, and that’s what I feel like I have been doing for Bobby and all the other kids like him,” activist Mary Griffith said.

Griffith has spent more than 25 years, since her gay son Bobby committed suicide in 1983, trying to prevent the kind of tragedy she had a hand in making. Her story is about to reach a wide audience with the premiere of a movie based on the book about Griffith and her son.

“Prayers for Bobby,” a Lifetime Original Movie, is based on the 1995 nonfiction book “Prayers for Bobby: A Mother’s Coming to Terms with the Suicide of Her Gay Son,” by Leroy Aarons, founder of the National Lesbian and Gay Journalists Association.

“It’s going to help a lot of kids and adults as well,” Griffith said. “That’s really what makes it worthwhile for me to keep doing that. It just has to be out there. I hope that it does bring hope and education to people.”

Daniel Sladek, the film’s producer, said it took some time to get the book onto the small screen.

“It took us 12 years to get this movie made,” he said. “My partners and I first optioned the rights to the book 12-and-a-half years ago. Mary and I probably had a million phone conversations and personal meetings over the last 12 years. It didn’t come out of left field. There was a tremendous amount of preparation and dialogue. I’ll also say that when we asked Sigourney [Weaver] to do the movie, the first thing she requested was to fly up to Walnut Creek with me so that she could meet Mary to make sure that Mary was OK with her playing Mary.”

So the Oscar-nominated actor took on the role, depicting Griffith from her days as a devout Christian who believed she wasn’t allowed to accept her son’s homosexuality. She becomes convinced that he could be cured of what she sees as his sin, while the rest of their family comes to terms with his sexual orientation.

Bobby immerses himself in prayers and church activities to appease his mother’s wishes, but becomes increasingly depressed because of his Presbyterian church’s disapproval of homosexuality. Utimately Bobby commits suicide, prompting Griffith to reflect on her son’s life, question her faith and, finally, accept his orientation.

“I think the Griffith family is so generous in bringing this very personal loss of their beloved Bobby to a world stage,” Weaver said. “When you read that this is one of the books kids give their family when they’re going to come out, I thought, how wonderful if we can put this in another form, because it’s hard to keep picking up a book. Once the movie is on, it’s always hard for me to try to turn it off. There it is in another form for families to experience and at least get the ball rolling. All of us were driven by this commitment to Bobby and this story being told.”

Weaver admitted that, on the surface, Griffith may not seem sympathetic, which is why she insisted on meeting her when she was offered the role.

“I think the universal thing that binds all parents together is that they want their children to be safe,” Weaver said. “So I related immediately to Mary. I also had the great advantage of meeting Mary and being able to discuss this whole journey with her. She was very straightforward and candid. I thought that the whole family loved Bobby so much. There was so much love in this family. They were not guided well by their church and by their own instincts. They were in such mortal fear for Bobby’s soul and for his mortal life as well. It was driven by a desire to do what’s best for him. Being a parent myself, sometimes we are blind to the things that are right in front of us when it comes to our children. We put their welfare above everything else. I think that’s what Mary felt she was doing. That was sort of my way in. The Bible verses, all of these things were for the purpose of rescuing Bobby from this thing that had taken hold of him. I think as Mary, I felt [those things] had to be fought and could be won. There’s misinformation in the world that homosexuality is a choice and a possession you can fight against. There’s a lot of this misinformation out there, and unfortunately Mary was reading it.”

Weaver said she hopes efforts like this movie will counteract the kind of misinformation spread by the church, especially in light of the recent events surrounding Proposition 8.

“I think it’s unconstitutional to have a referendum like that,” she said. “People labor under this idea that homosexuality is a ‘lifestyle choice.’ The Founding Fathers were much too wise to legislate who falls in love with whom. They were men of the world. Homosexuality has been part of our species and our history for thousands of years. Everyone has an equal right to pursue happiness in this country. It is there in black and white and there are no exceptions. So to me, to even put that on the referendum, I can’t even believe that it’s legal. To me it’s a human-rights issue.”

Griffith is also a staunch supporter of marriage equality.

“It’s almost like people don’t realize that they’re troubling their 14th Amendment guarantees when you start taking things away from other people,” she said. “That to me is really scary and I’m sorry to see them do that.”

Speaking with Griffith, it’s difficult to reconcile who she is today with the person she was in the movie. Weaver said that the Mary she was introduced to is worlds away from the Mary that Bobby lived with in the late 1970s and early 1980s.

“We did talk about that time,” Weaver said. “When I met Mary, she was such a warm person and had a very droll sense of humor. Not that she was cracking jokes left and right, but she clearly has a sense of humor. The person at the beginning of this story did not. I said to Mary, ‘What were you like? Were you like the person I’m meeting now?’ and she said to me, ‘I was very serious.’ And I got it. I got it in a kind of heartbreaking way. This was life or death for her son and for her family. That Mary that I met that day was not the Mary that started this whole process with her son Bobby and the Mary that you see in the movie. She’s fighting for the life and soul of her son, and she thinks that she’s doing the right thing for him. The more he fights her, the stronger she felt she had to be. That’s the terrible thing.”

Just because Weaver could relate to Griffith doesn’t mean she pulled any punches in playing her on screen. Weaver said she was more concerned about accurately portraying Griffith’s story.

“I have to say I didn’t think about offending Mary because when Daniel [Sladek] and I went up and met the family, what was so powerful from every single member of the family was they wanted this story told. As Mary said, if this story being out in the world can save one family from going through what they have been through losing Bobby, it was worth it. It was not my intention to do an imitation of Mary, and the book goes much more into detail about Mary’s past and her need for religion. I felt that I had the go-ahead from Mary to take the essence of what happened and run with it. We were there to get down to the truth as much as possible and put that on film. It didn’t occur to me that there were areas I could go where Mary wouldn’t like it because I felt that in that day that I got to spend a few hours with Mary, she gave me total permission to just try to tell the truth about this as much as I could. I really felt that she was behind us and guiding us. I don’t know if she prayed for this to work out well, but considering the time we had and the organizational problems we were up against, it’s just a miracle it came together so well. I have to say there was no time for me to anguish about how Mary was feeling because I was interpreting what happened in this movie.”

Griffith said that Weaver did an excellent job of portraying her in the movie.

“I had full confidence in everybody involved,” Griffith said. “After I saw the movie, I thought, ‘My gosh, they really got to the heart of it in such a short time span that it has to be told.’ I really didn’t have any doubts. How could I? Look at this wonderful actress. She really reached to the depths of where I was. That was very evident in her portrayal. It was very intense and spoke to the heart and soul of what I went through.”

After Bobby’s death, Griffith discovered Parents, Families and Friends of Lesbians and Gays, then went on to become president of an East San Francisco Bay PFLAG chapter and appeared frequently on television talk shows. She has also campaigned for public-school counseling supportive of gay teenagers, believing that Bobby would still be alive if his high school had had such a program.

Griffith admitted, however, that even if she had known about resources like PFLAG before Bobby’s suicide, it wouldn’t have made a difference in how she dealt with his sexual orientation.

“I was too entrenched because there were verses in the Bible to knock PFLAG and the gay Metropolitan Church [that said] Satan can be like a shining light,” she said. “I was cornered no matter which way. There was a verse to detract from anything Bobby might have wanted to share or teach me.”

Griffith lays much of the blame about how she dealt with Bobby’s sexuality on her church at the time, California’s Walnut Creek Presbyterian Church, which preached a message that homosexuals were sick, perverted and condemned to eternal damnation.

“I would probably have considerable guilt, but my saving grace is the fact that I truly was ignorant,” she said. “This was not something I did out of malice or hate. It was pure ignorance. I can forgive myself for that. I had a hard time forgiving the church, though.”

Griffith added that the church’s view about homosexuality overruled her gut feelings regarding her own son.

“When a mother cannot trust her own conscience … if I had listened to that, it would have been entirely different,” she said. “Anything in my heart or mind that honored Bobby or his sexuality was from Satan. Any love that I had for him as he is was not from God. That is still a big part of religion today and Christianity. Can you imagine? Love has got to be from God. That was distorted in my life. It’s such a sad thing that they have to believe in such a creature.“