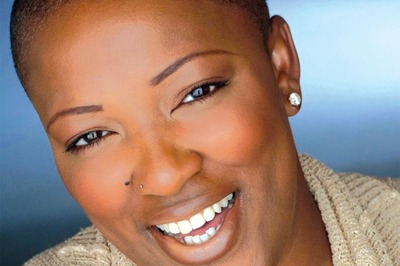 Broadway star and singing sensation Frenchie Davis obviously has no fear when it comes to taking on seemingly larger-than-life stage roles.

With top-shelf productions like “Dreamgirls” and “Rent” and a stint on “American Idol” on her résumé, Davis’ Broadway career has seen her step into roles that made marquis names out of superstar talent such as Jennifer Holliday. Now Davis has taken on another high-profile gig, starring in the 30th-anniversary production of “Ain’t Misbehavin’,” a play with which she was already quite familiar.

That’s right, they called her. But the 29-year-old Davis said she has been acting long enough to know that being on the short list for a high-profile audition isn’t something to get a big ego about — even someone with her talent and experience might not get picked for the gig.

“I still go on auditions,” she said. “Sometimes they will call. Even when they call, I still have to audition. They’ll call and say, ‘We’re interested in you. Would you come in and audition?’ I think any performer worth their salt still wants to work hard and prove themselves. It’s great to build enough of a name for yourself where they’ll even consider you for a role, but I don’t ever expect to get a job without having to audition for it or prove that I can do it. I would think that anyone would want their show to be great and make sure that they’re casting people who can do the part. Just to be considered is a great blessing and opportunity, but I don’t expect to not have to work for it.”

“Ain’t Misbehavin’” is definitely the kind of production that performers have to work for, with its relatively small cast and show-stopping emphasis on singing and dancing. The play originally opened on Broadway on May 9, 1978, and became an instant smash, winning every award a musical can win in a Broadway season (Tonys, Drama Critic’s Circle Awards, Drama Desk Awards, etc.). It also made the late Carter a star for her Tony-winning performance.

Davis said she isn’t nervous about taking on roles that were originated and defined by superstars Holliday and Carter.

“I don’t really think that it’s accurate to compare me to either of them,” she said. “There’s only going to be one Jennifer Holliday. There was only one Nell Carter. So I think that anyone that goes into this has to do so with that understanding. Unfortunately, a lot of the performers of our generation have forgotten that we’re supposed to be paying homage to these women. They opened the door for us. I don’t even think that I’m eligible to be compared with them. They’re not my contemporaries. They’re more like my mentors. If anything, I’m trying to honor what they created originally.”

“Ain’t Misbehavin’” recaptures the world that the legendary Fats Waller embodied and largely represented: 1930s Harlem and the Golden Age of venues like the Cotton Club and the Savoy Ballroom and honky-tonk dives along Lenox Avenue, rent parties, stride piano players and new beat swing.

Since then, “Ain’t Misbehavin’” has been produced Off-Broadway, twice on Broadway (including a 1988 revival starring original cast member Carter) and three times on tour. It has also been produced all over the world in regional and community theater and stock productions.

Davis said the brilliance of the music is one of the main reasons the play has been such a hit and endured so well.

“Fats Waller was a genius,” she said. “His style of piano playing is still borrowed by artists today. The original cast was so great. The music is so great. That’s why people love it.”

Davis added that studying the music of the era in college gave her an extra level of familiarity with the production.

“I had already done plenty of research on it, having gone to a historically black college and wanting to do this as a living,” she said. “There was a lot of emphasis put on studying the Harlem Renaissance. Not only that, but studying the history of African Americans who have done this for a living. That was one of the added bonuses of going to Howard University. It didn’t take this play to make me want to study the history of this because I was already familiar. It gave me a reason to start listening to the music from that era again.”

This touring production of “Ain’t Misbehavin’” also features a few behind-the-scenes talents that were part of the original 1978 production. Both the original Broadway set designer, John Lee Beatty, and the original choreographer, Arthur Faria, are back on board for the 30th anniversary.

Davis said working with people who were with the play at the very beginning is an incredible experience.

“They know exactly what they want from the actors,” she said. “What can you say? They won a Tony. So it’s very exciting. It’s a great experience. They’re wonderful.”

And Davis isn’t the only star on the stage, as “Ain’t Misbehavin’” will also feature fellow “American Idol” alum and R&B/gospel star Ruben Studdard, who won the show’s second season, and Trenyce Cobbins, who finished fifth in the second season. Considering what happened the last time two “American Idol” contestants worked on a big-budget production (“From Justin to Kelly”), Davis has no concerns about working with someone else associated with the show.

“I love Ruben,” she said of her co-star. “We’ve remained close throughout the years and we’ve always been looking for an excuse to work together, so this has been wonderful.”

Speaking of Studdard (and definitely not trying to start any drama or anything), he, like many “American Idol” participants, has a record deal. And since it is widely acknowledged that Davis can sing rings around most of the artists the show churns out, the burning question is: When the hell is Frenchie Davis going to have a record out?

Keep in mind that Studdard, Clay Aiken and Kelly Clarkson each have at least two records out. Hell, even William Hung has four CDs out (probably gathering dust in cut-out bins, dollar stores and landfills all over the country).

As it turns out, Davis has always had her eye on a music career, but is still trying to figure out how she wants to navigate the treacherous music industry.

Davis added that she is taking some tentative steps toward music to keep her fans happy.

“Now, what I am doing is working on some dance music for the gay boys because they have been such a loyal fan base,” she said. “I’m working with DJ Tony Moran and some other fabulous songwriters and DJs to put out some dance music. We initially crossed paths because he wrote a song and was like, ‘I want to hear Frenchie sing this.’ It’s a collaborative effort, but Tony is the genius behind it. I perform at almost every gay Pride in the country every year anyway, so I may as well put out some dance music and then just see how it goes from there.”

Davis also said that a recording from “Ain’t Misbehavin’” will hit the shelves.

“We did a cast album,” she said. “I pray that they’ll let us re-record it because we learned the music in two days, then recorded the cast album. Now that we’ve been doing the show on the road for a few months, we know the music way better than we did when we learned it for the album. I know there’s definitely going to be a cast recording, so hopefully we can fix it before it comes out.”

As for post-“Ain’t Misbehavin’” plans, Davis said she may tour in the summer. That is, unless Broadway comes calling again.

“There are also some things in the works for another Broadway show,” she said. “You just never know what’s going to happen. I’m stirring a few pots right now. We’ll see which dish gets cooked the quickest.”

Davis was tight-lipped about which show she might take on next.

Really? Humility aside, other actors surely have got to have a slight sense of dread when they show up at the audition and realize they’re competing with Frenchie Davis for the role, right?

“This is America,” she said. “Especially if you’re talking about Broadway. There are a lot of talented girls in New York, a lot of beautiful and talented girls in New York. I think all of us move there to pursue this with the understanding that the answer is not going to be yes every time. Just because more people know who I am doesn’t necessarily mean that I’m right for that particular part or more right than another person. At the end of the day, I think it’s all about the work that you are willing to do, and all that other stuff is extra.”

It is only when asked about who she would base her career on that a hint of Davis’ future diva-dom makes an appearance.

“I’d love to have a Bette Midler-esque kind of career where I’ve done theater, TV and film,” she said. “She’s done everything. She’s so diverse and so fabulous. I just love all of her work. I would love to be a black Bette Midler, so to speak.”