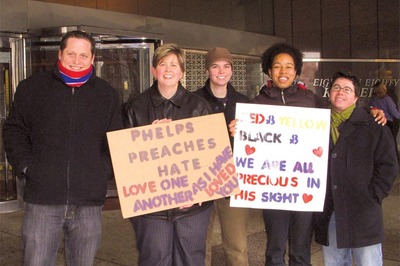 Members of a virulently antigay organization arrived for a scheduled demonstration at a local high school this week and were met with throngs of LGBT and ally students and community leaders, who provided a united front against the protesters’ vitriol.

Four members of the Westboro Baptist Church, the Topeka, Kan.-based organization headed by Fred Phelps, scheduled a day of protests throughout Philadelphia Jan. 5 centered around the funeral of a local doctor killed in Iraq.

According to a press release issued by the WBC, the organization decided to make the trip to Philadelphia to protest the funeral of Maj. John Pryor, a University of Pennsylvania surgeon who was killed Christmas Day in Iraq. WBC, which operates the Web site GodHatesFags.com, travels the country demonstrating at the funerals of men and women killed in the war to bring attention to their belief that God is killing soldiers to express his dissatisfaction of the American societal acceptance of homosexuality.

Before demonstrating outside Pryor’s funeral at the Cathedral of Saints Peter and Paul in Center City, WBC members gathered outside of Central High School, where they were met with a strong resistance from counterprotesters.

The organization’s Jan. 1 press release described that WBC was targeting Central as a stop on its protest tour because the school “continue[s] with the parents’ job of lying to these children” and that the WBC was “going to tell them a little truth because soon they will be grown snakes and will each be personally responsible for their own behavior.”

Gloria Casarez, the mayor’s director of LGBT affairs, postured that the WBC may have chosen Central because of the school’s long-standing and active gay-straight alliance.

Last weekend, Casarez sent out a series of e-mails to contacts within the local LGBT community and also got in touch with the Philadelphia School District and Police Department, as well as Central representatives such as principal Dr. Sheldon Pavel, who had already been put on alert.

Pavel said that once he saw the WBC press release, he immediately contacted numerous school affiliates to ensure that all parties were adequately prepared.

“I notified the people that I report to in the school district and then dealt with our staff members, our home-and-school president and our student leadership and put out the information to all of these constituents,” Pavel said. “And then on Saturday I came in here and sent out an e-mail to the entire staff. The alumni also did its part in notifying its executive board, as did the home-and-school association.”

Also over the weekend, Pavel posted an announcement on the school’s Web site to notify students of the impending protest and to advise them to ignore the protesters so as not to “play into the hands of those who seek to spread hate.” He said he also coordinated security efforts with the school district and the police.

By the time the WBC members — one woman and three children — arrived at Central around 7 a.m. Monday, a crowd of Central students, alumni, teachers and administrators, students from other high schools and local LGBT leaders had begun to amass. By the end of the nearly 90-minute protest, about 200 counterprotesters had gathered, armed with posters and signs.

Allison Buehler, education manager at LGBT health clinic Mazzoni Center, said news of the protest had begun to circulate through Facebook gay-straight alliance pages last weekend, and that the students at Central and other local high schools should take credit for the successful counterprotest.

“The students were amazing. The adults were there really to support them but the students did everything,” Buehler said. “When I arrived around 7, there were students there already prepared with signs, talking about what message they wanted to send and talking with the principal about who they were trying to educate, and even things down to the logistics of where they should stand.”

Pavel commended the students who organized and participated in the counterprotest.

“I am very proud of our kids, of their passion and of their desire to take a stand,” he said. “I think they did a real nice job.”

Pavel was present throughout the protest, which, Casarez noted, showed the Central students where their school stands on LGBT discrimination.

“The principal was very affirming, out there with the students speaking out against bigotry. He was present for every student who was crossing the street, who could see that he was there standing against bigotry and against hatred,” she said. “It sent such a big message for people to see the principal standing out there. I don’t know that we’d have a lot of other principals doing that.”

Pavel, who said he didn’t have the “foggiest idea” why WBC chose Central other than the fact that the school “stands for some things they are against,” said that, as principal, he had a responsibility to stand beside his students.

“My role is to be where my kids are. It’s not complicated. My responsibility is to my kids, my staff, my parents, my alumni,” Pavel said.

Later in the day, WBC members also had planned to picket at the Italy Consulate General and the Israel Consulate General, where several LGBT supporters gathered to counter the protesters, who did not arrive at the scheduled time.

Michelle Kline, J. Mason and Damon Constantinides, staffers at The Attic Youth Center, waited outside the Israel Consulate General to “show support and balance out the presence,” Kline said.

Kelly Rice brought several posters to the protest to inform the WBC members that their message was not welcome in Philadelphia.

“I belong to a church that doesn’t necessarily believe in the same things that [Phelps] believes in,” she said. “We don’t believe in hate.”