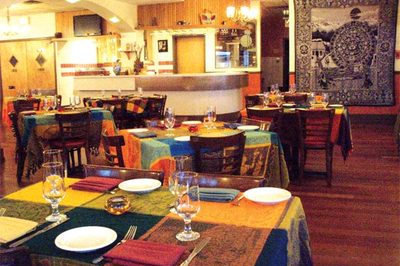 Finding money in an old coat pocket, getting lost and stumbling upon a quicker route, discovering Paxia — these are all examples of serendipity. No, Paxia is not a new drug or a computer game; it is a new culinary gem in South Philadelphia.

Paxia, which means “peace” (a nice thing to celebrate at this time of year), is a quaint Mexican restaurant recently open by Dionicio Jimenez and Ismael Torrez. Jimenez is also co-owner and executive chef at Xochitl, for you food enthusiasts.

Situated in the Bella Vista area in the venue that was previously Molcajete Mixto, Paxia is a diamond in the rough. I’d invited two friends to join me and, as I drove down Christian Street, the place was so unassuming that I drove past it. After backtracking, I found the address and was a bit dismayed at first glance — a set of glass doors that evoked a dry cleaners rather than a fine eating establishment.

But looks can be deceiving. Once I crossed the threshold, I entered a charming little room quietly lit by votive candles. The décor is a bit minimalist, but there is something cozy about the place. Paxia’s menu offers Mexican classics as well as popular street food indigenous to Mexico City. In addition to the food, Paxia has a unique little shop in the back of the restaurant that sells Mexican imports (glassware, bowls, artifacts, artwork) for reasonable prices. And I was happy to hear the family at a big table in the corner of the room speaking Spanish — it’s always a good sign for an ethnic restaurant when natives of the culture give it their stamp of approval. I brought along my own two Latino experts, but I’m revoking their cards since I was able to pronounce the dishes on the menu better than they were. (Sorry, Ms. Cintron and Mr. Zayas.)

We were greeted warmly by the manager on duty, a lovely woman with a great name, Kim Funderburk, who put us all to shame when it came to rolling her Rs. She explained the specials to us and offered to take our store-bought sangria and spruce it up a bit. Paxia is BYOB, something useful in these days of economic strife. Our wine was a bit sweet to start, but whatever Funderburk did to it, it came back robust and chock full of fresh fruit. Paxia also offers lime mixers for tequila and will hook up your sangria for a charge.

We started out with the complimentary salsa and chips. We were offered two kinds of salsa: a salsa verde, which had enough flavor to make it tasty but still mild enough for me to partake without having to finish off the jug of wine; and a red salsa, which I left for Mr. Zayas. (I guess it had a little kick to it, because he almost knocked the chips over reaching for the water.) We started off with the tres crepas ($7), a trio of crepes in a tomato-based sauce stuffed with zucchini flower, huitlacoche and goat cheese, respectively. Huitlacoche is otherwise known as a Mexican truffle and I’ll just leave it at that. Ms. Cintron and I really enjoyed this dish. The tomato topping gave it a different taste than traditional (as we’re used to) Mexican dishes. Our other dining companion liked them, but wasn’t as taken with them (even though he took the biggest portion … ).

We also ordered guacamole ($6) to go with the chips and this got thumbs up all around — fresh avocado with lime and cilantro with slivers of cotija cheese.

Also from the Para Comenzar (to start) portion of the menu, we ordered the empanadas de mariscos ($7), corn masa turnovers stuffed with shrimp, fish and crabmeat. One bite and the whole table erupted into a chorus of “mmmmmns” and “oh my God, that’s good.” The delicious mix of seafood with tomatoes, onions, cilantro and other spices was served with an herb aioli and spring mix of greens.

For our Platos Fuertes, or main dishes (translated, “fuertes” means strength), I started with the chuleta de puerco al pastor ($14), grilled pork chops with pineapple guajillo sauce. Despite the fact that the guajillo is an extremely hot chile, sometimes called the travieso (“mischievous”) chile, the dish had zing but was not too powerful for a wimp like me. It was served with a cactus and fava bean salad with red onions and guacamole. The cactus was crunchy, a little like the texture of seaweed salad, and went well with the fava beans.

Ms. C. ordered the pato con mole poblano ($16), grilled duck breast with mole sauce, rice and salad. It was, if I can interject a little New York here (my parents’ native language), “to die for.” I don’t normally care for duck, but this was exceptional. Mole, for those uninitiated, is a rich, reddish-brown cooked sauce, comprised of onion, garlic, several varieties of chiles, ground seeds and a small amount of Mexican chocolate, often used for poultry.

Mr. Z. had the arrachera ($18), grilled skirt steak served with a chicken mole enchilada, guacamole and rice. A small hollowed-out squash filled with zucchini and pureed squash with Parmesan cheese decorated the center of the plate. Everything was wonderfully done and the portions were healthy.

For dessert, we ordered the flan ($7), housemade with Rompope liqueur. My dining companions declared it among the best in the city — not too sweet, not bland.

We also ordered the Mexican chocolate mousse ($7). This also got high ratings. The housemade mousse was served with burnt Patrón XO Café and topped with a Mexican chocolate swirl, fresh raspberry and a sprig of mint.

But the crème de la crème, so to speak, was the crepas de plantano ($7), an exquisite presentation of warm crepes filled with caramelized bananas, cajeta (a thick syrup made from caramelized sugar and milk) and walnuts, served with fresh strawberries and sprinkled with powered sugar.

At the end of each meal, guests are treated to a complimentary cordial. We were presented with small snifters of Agavero, a tequila liqueur flavored with the essence of Damiana flowers (known as an aphrodisiac), and Patrón XO Café, a tequila-coffee liquor.

A pleasant way to wind up our South Philly excursion.