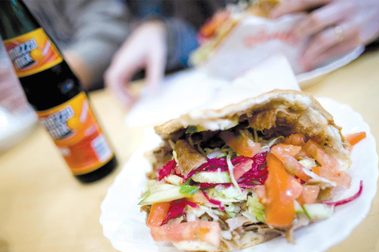 As the American economy continues its slide south, consider heading east to Berlin, Germany’s glowing capital city. It’s an invigorating mix of futurism and history that offers less-expensive hotels, food and shopping than many other European destinations. And its gay-friendly continental attitude can’t be beat.

Berlin in the 1920s was cosmopolitan and had a thriving gay culture. But the horrors of the Nazi period (1933-45) destroyed that. Berliners, along with considerable American help, eventually brought the city back to life after World War II bomb raids leveled nearly 70 percent of it. Next came the “Wirtschaftswunder” (economic miracle) of the 1950s. Now, with the two halves of the city brought together after the 1989 fall of the Berlin Wall and the end of the German Democratic Republic, the accepting spirit is alive again. Today’s tourist is a beneficiary of that mash-up of history and politics.

Berlin-based artist Tomi Paasonen (www.paasonen.com) revels in the city’s eccentricities: “Berlin is a tolerant, experimental and artistic city, where people from all over the world mingle to enjoy the low rents, easy-to-survive discombobulation and alternative flair.” Paasonen added that the former eastern part of the city is more to his liking. “Now, after the fall of the Wall, most of the old buildings on the East Side have been renovated and it’s full of life, new galleries and cafés.”

American expatriate Marcy Snook said love pulled her to Berlin. She joined her girlfriend here, whom she later officially married under German law. “My German wife and I enjoy a diverse and pleasant social life in our lesbian circles. Walking the historic streets of Berlin hand in hand is not only a non-issue, but it is quite possible to see many similar couples,” Snook said.

And Berlin is gay-friendly from the very top. The city’s openly gay mayor, Klaus Wowereit, cuts a dashing figure on Berlin’s social scene and is said to be well-liked by many Berliners.

There’s so much to see in Berlin. So start at the symbol of Berlin, the Brandenburg Gate, in the same part of the city as the Reichstag, home to the Bundestag or German National Parliament. The glass-domed top is an architectural highpoint of the city and, although the lines are long, you can go up in the structure for a view of the city. Around the corner from the Brandenburg Gate is the massive “Memorial to the Murdered Jews of Europe,” a somber assembly of dark monoliths taking up an entire city block. It’s in the same general area where Hitler’s bunker once stood (although eerily marked on the map, there’s really nothing to see). Across the street from the Jewish memorial is the “Memorial to Gays and Lesbians Killed in the Holocaust.” The 12-foot-high concrete square block lies in a grassy section of the Tiergarten, or “Animal Park,” and features a video of two men kissing inside.

As for getting around, public transportation in Berlin is fast and efficient. The yellow U-Bahn, or subway, is charming in its compactness as the wagons are smaller than American subway cars. Although there is no physical barrier preventing you from entering without a ticket, don’t be fooled! You must buy a proper ticket or risk being nabbed for “Schwarzfahren” or black riding. This illegal practice can get you taken off the train after a random spot check by a plainclothed subway agent, and you’ll be forced to pay a fine.

There’s never really a bad time to visit Berlin, but if you happen to find yourself there in summer, Snook says the Motzstrassenfest, Europe’s largest gay street festival, is quite a scene. Taking place in the city’s Schöneberg section of town, the festival spans several days in the heart of gay Berlin around the Nollendorfplatz. The popular Christopher Street Day Parade in June is also a great people-watching event and Europe’s largest Gay Pride parade.

For the shopaholic and foodie alike, a visit to one of the largest department stores in the world is in order. Sitting squarely in the former western sector, the 101-year-old Kaufhaus des Westens or “Department Store of the West” is not to be missed for its historic grand character. The massive stone building barely survived burning down completely in World War II after an American warplane crashed into it. Recently, the sixth-floor food hall touted the joys of delicacies of the “American South,” humorously placing Pop-Tarts and mac and cheese in a place of honor in an inviting display. But most of the emporium’s offerings are upper-crust. So for a taste of “Old Europe,” without a trip to Paris, look for Lenôtre in the middle of the food hall, with its stunningly crafted pastries.

For an inexpensive and satisfying belly-filler, check out the friendly little stands for a “Döner Kebap,” which means “turning roast” and is somewhat akin to a gyro. The vendors are usually entertainingly brisk with their service and speak in a friendly mix of German and English. For one of the tastier Döner places, try the outpost of the popular Balli chain at the U-Bahn Alt Tempelhof.

Leave some room later for one more authentic Berlin experience — the Curry Wurst. The Konnopkes Imbiss, a sausage stand under the U-Bahn station at Eberswalder Strasse, is a local favorite. The curry sausages are enjoyed in the open air with bicycles and trolleys zooming by.

To get your fill of gay nightlife, just take the U-Bahn to Nollendorfplatz. Although during the day there’s not much to see in this sleepy residential neighborhood, by night the streets of this gay area come alive with men in leather and rubber garb making their way to the many bars, saunas and cruising joints. Grab a free copy of the gay guide “Siegessäule” at the main gay and lesbian information center, Mann-o-Meter (Bülowstrasse 106), near the Nollendorfplatz to get the lay of the land. For late-night dancing upstairs and adult fun downstairs, start at Connection (Fuggerstrasse 33, www.connection-berlin.de).

“The city itself is such a living project, it keeps me engaged, aware and entertained,” Paasonen said. ”As someone who travels a lot, it’s a lovely place to return to because each time one fragment of it is coming out of the cocoon, remodeled, demolished, refurbished or, thank God, still there.”