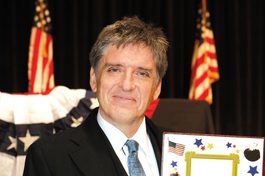 “They say that’s when you know you’re in show business: when you work on New Year’s Eve,” Craig Ferguson said.

“If you’re working on Christmas Eve, it means you’re Santa’s helper. You’re either a midget or clergyman … or both.”

Ferguson is definitely in show business — and probably the best late-night talk-show host on the air. His charming and slightly madcap personality is more than enough to hold down the fort on “The Late Late Show” and command the stage for a New Year’s Eve performance at the Borgata in Atlantic City.

“I get to cuss a little more,” he said of what fans can expect on Dec. 31. “It’s a little more free of censors and free of the sensibilities of the advertisers. It’s a little different but nothing you wouldn’t be aware of if you watch the show.”

Still, a daily televised show and a live theater audience can be two completely different experiences for any entertainer. Ferguson said he prefers the looser atmosphere of his stage performances over the more tightly controlled TV show.

“The stage is easier,” he said. “It’s what I know best. It’s what I’ve been doing for 20 years. As times goes by, the show becomes very much like that. I think I’m on show 800 or something this week. You become immune to it. It’s about doing it and the experience.”

Ferguson isn’t just content to perform in major cities, either. His schedule sees him performing in some off-the-beaten-path towns like Waukegan, Ill.; Hammond, Ind.; and Norman, Okla.

“I like doing that,” he said of the further-flung performance venues. “I think they’re interesting. I think there’s a great danger, especially in the game that I’m in, to only exist within Los Angeles and New York. That’s not America. That’s just two cities.”

Ferguson has spent a lot of time and energy getting to know America. The 46-year-old Scottish-born comedian has been living and working in the U.S. for years both as a comedian and TV personality, thanks largely to his breakthrough role as office boss Nigel Wick on “The Drew Carey Show.” But it wasn’t until earlier this year that Ferguson became a U.S. citizen, achieving a perfect score on his citizenship exam.

How many natural-born Americans can do that?

“My son is an American,” he said of the reasons he became a U.S. citizen. “I’ve lived here for 14 years and before that I worked here off and on for 10 years. I have family here, everything. I’m here. I’m an American. I should be part of it.”

And part of it he is. Ferguson doesn’t mince words, and his razor-sharp wit and point of view can sometimes carve humorously deep into political issues.

Ferguson said he feels like he can comment on political issues confidently now that he is a citizen.

“I think that sometimes it gives you more of a right to talk about stuff and sometimes it gives you less of a right to talk about stuff,” he said. “What you lose on the swings you get on the roundabouts. It’s odd. I have to be careful sometimes. Until I became a citizen, I wouldn’t comment at all on politics. I get very ticked off when I hear people who are not American citizens telling America how they should be running the country. I’ve always been a great believer that the most effective and informed voice of dissent in America came from within America. So I wanted to be part of that voice of dissent or add my voice to whatever political event that was engaged at the zeitgeist at the time.”

The zeitgeist includes Proposition 8, California’s recently passed ban on gay marriage, the effects of which Ferguson has seen firsthand as his show tapes in the state.

“I didn’t vote in California,” he explained, “because I’m registered to vote in Vermont. Had I been voting in California, I would have been voting against Prop. 8. It’s funny. I was driving my son to school one day before the election and he saw these ‘Yes to Prop. 8’ people marching in a little circle yelling things. He said, ‘What’s going on?’ And I told him about Prop. 8. And he said, ‘So that’s like families with two daddies or two mommies?’ I said yeah. He said, ‘Everybody has got two grandpas or two grandmas, why can’t you just have two dads or two moms?’ I said, ‘I don’t know. I don’t know why they won’t allow it.’ He said, ‘When will these people stop interfering?’ I said, ‘I have no idea, son. Maybe never.’ It’s very funny. My son is 7 and the questions are exactly the same as I have: ‘What the hell is wrong with you?’ It’s weird.”

Ferguson added that while the political climate in the UK is more liberal regarding LGBT rights, there was a time when the country adopted many of its policies toward civil rights from the U.S.

“That’s a fairly recent phenomenon,” he said about the somewhat more tolerant social climate in the UK. “That’s only in the last 20 years or so. I think the gay-rights movement in the U.S. had a very big impact on the UK during the 1960s and 1970s. I think that they are related. Certainly, there’s plenty of homophobia in the UK too.”

Speaking of the UK, it is surprising to find out that Ferguson rarely, if ever, gets to perform these days in the country where he got his start, especially since British audiences tend to like edgier American comics.

“Bill Hicks was a much bigger star in the UK than he ever was in America,” he said. “They’re very big on American comics, as I recall. It’s been such a long time since I lived there; I don’t go over there for work. I get offered from time to time to do shows there but I don’t feel any draw to go and do that.”

It may have to do with Ferguson’s workload. On top of taping a daily TV show, touring and being a dedicated father, he also managed to carve out time to tape a new Comedy Central special due out in March, as well as throw his hat into the world of literature with his upcoming memoir “American on Purpose,” due out in the fall.

“You kind of find the time during the day, on the weekends or on the plane,” he said about how he gets his writing done during his packed schedule. “It adds up. I was mystified by the whole thing. I wrote my first book a couple of years ago. I don’t know why I didn’t think of this. If you just keep going, eventually it happens. You write a page here and a page there. If you write a page a day for a year, you have a book. It’s not that much. The standup is more profane than the show and can be more detailed and involved. With the book, writing is a more intimate form of communication, but I don’t know: Maybe television is that intimate. Apparently they’re different but they’re all related.”

Given the shifting television landscape, Ferguson is wise to diversify. The late-night scenery is due for a significant upheaval next year as its reigning ratings king, Jay Leno, takes over the 10 p.m. slot, leaving “The Tonight Show” to Ferguson’s current competitor, Conan O’Brien. O’Brien’s time slot will be taken over by former “Saturday Night Live” cast member Jimmy Fallon.

Ferguson, while unfazed by the recent developments, said he expects some kind of impact.

Not that Ferguson is going to start changing his show. If it seems like he takes a more intellectual and comedic high road on his program, it’s because he does. At times he can come across as being as politically and socially savvy as “The Daily Show”’s Jon Stewart. He’s also not above breaking from the late-night pack when he feels it necessary, as he did early last year. During Britney Spears’ drunken and panty-less tabloid misadventures, Ferguson was one of the earliest and few talking heads to take a step back and say publicly that maybe it wasn’t something to joke about and she needs some help.

“That’s who I am,” he said about his stand. “I don’t think anything has changed, but I wasn’t out to change anything. It wasn’t like I wanted to tell anyone else what they should or shouldn’t be laughing at. I do have a belief that my job as a comedian is to speak the truth to power, not speak the truth to powerless. I’m not sure that attacking people who are clearly at a low ebb in their life is something that makes me feel good about myself and basically that’s it.”

He added that he isn’t trying to set a standard for anyone else to follow.

“I don’t have a manifesto for anything,” he said. “What I do on the show is comedy I feel comfortable with, but I don’t have any kind of moral barometer on other people’s comedy. What they do is what they do. I just want to do stuff that I’m happy with. I don’t have set rules for anybody else about that. For me, I take it on a case-by-case basis. If Britney Spears does something funny, absurd and pompous, I’m going after her. But if she has some kind of mental breakdown, shaves her head and starts speaking with an English accent, that’s someone who needs a fucking doctor. They don’t need a late-night comedian. That, I think, I’ll do on a case-by-case basis. I don’t think there should be rules about who you can and can’t laugh at. I just have a personal code about it.”

Don’t worry too much about Ferguson’s rules, though. Even when he’s serious, there’s an undercurrent of silliness to be found. And when he decides to be silly, watch out.

“We have a dog coming on the show that can skateboard. I want to see if I can have him deliver the e-mails every night. If it works out, I’ll make him my sidekick. I’d like to have a dog sidekick.”

Those lofty ambitions are not at all surprising, considering Ferguson’s favorite comedians.