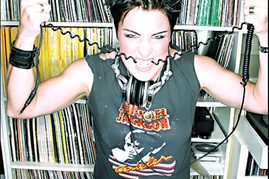 Being the world’s No. 1 female DJ has its perks. For openly gay DJ and producer Tracy Young, those perks include world travel, being the toast of celebrity-studded dance parties and having Madonna on speed-dial.

But we’ll get to that later.

Young made a name for herself as a self-taught DJ in her hometown of Washington, D.C., which she lovingly refers to as “Chocolate City.” Young said that the city’s convergence of many different urban styles of music, from R&B to go-go, had a huge influence on her styles and tastes as a DJ.

“D.C. is very soulful musically,” she explained. “I worked for a hip-hop radio station. I’ve been influenced by a lot of old-school R&B like Frankie Beverly and Maze. It’s very different there. So when I started playing house music it was more on the soulful side. Deep Dish is from there. BT is from there; Pharrell on the hip-hop side of things and Timbaland. There’s a lot of talent that comes out of D.C. I definitely enjoy the more melodic side of music than just tracks and beats. I like lyrics and music.”

Young’s ear for melody and hooks propelled her through the ranks and she quickly became an in-demand DJ on the D.C. scene. Then in 1998, she relocated to Miami to work with Interscope Records and immersed herself in the booming dance-music scene and party culture of South Beach.

Young would have eventually worked her way to the top for sure, but then Madonna entered the picture.

It turns out the global superstar just happened to be attending a millennium event that Young was DJing. Madonna was so impressed by Young’s skills that she invited her to spin at her movie premiere for “The Next Best Thing,” her CD-release party for “Music” and her wedding reception in Scotland.

Young’s stock as a DJ immediately skyrocketed. These days, the 30-something DJ finds herself in and out of studios, clubs and large venues all over the world. Currently, Young is shadowing Madonna’s “Sticky & Sweet” world tour as the DJ for the show’s official after-parties.

Still, most people would be a little apprehensive about the prospect of entertaining people that just got off a technologically dazzling, huge and over-the-top dance-pop experience like a Madonna concert. But Young isn’t one of them.

“People come to the party with a lot of energy,” Young said. “They’re really fun. Depending on the party, sometimes I’ll play Madonna, sometimes I won’t. People are really pumped up after her show.”

It’s a good thing the after-parties tend to be lively events, as most of the time Young doesn’t get to take in the shows that precede them.

“I sometimes go but I have to leave early,” she said. “Sometimes I don’t go. It depends.”

Keeping a room packed with satiated and starry-eyed Madonna fans is one thing. But it’s another thing to DJ at something as high-profile as Madonna’s wedding.

“That was stressful,” Tracy said. “You have several important days in your life where you want everything to be perfect. Your wedding is one of them, so yes, I was very stressed out. Madonna and I went over the music and made sure I had everything she wanted. She never told me what to play but she did want to hear a few specific songs. She let me do my thing.”

So … does that mean DJ Tracy Young will be on the decks for Madonna’s next wedding?

“I don’t know,” she answered with a chuckle. “I don’t know what her plans are at the moment. I think she’s trying to get through the divorce before she starts thinking about something new.”

Not that Young has to sit by the phone waiting anxiously for Madonna’s call. Her talents are highly in demand as she headlines clubs and crafts remixes and beats for a number of A-list divas, including Christina Aguilera, Mariah Carey, Britney Spears, Cyndi Lauper and Mary J. Blige.

Young’s wish list of artists she would like to work with in the future is a short one: Sarah McLachlan, Annie Lennox, U2 and George Michael.

Young explained that the reputation she has earned working with Madonna has gotten her a certain amount of trust and creative carte blanche when remixing even the most controlling pop superstars.

“I think most artists respect the fact that we are all artists and we all have an interpretation of that art, whether it be music, painting or whatever,” she said. “For the most part, nobody really has much to tell me. They just let me do my thing.”

Young added that she is also comfortable in her role as one of the top DJs in a highly competitive industry.

“Personally, I’m not a competitive person. I see talent in everybody around me and I kind of pull from that,” she said. “I compete with myself. Of course, people influence me. I’ve been fortunate to have had such a remix career for such a young producer. I kind of got lucky and worked with the best. I didn’t have much trouble asking for what I wanted because Madonna was one of the first people I remixed. Most people get 20 years under their belt and then they work with Madonna. When you start with someone like her or Mariah Carey, you have an edge.”

That edge has allowed Young to branch out into her own brand as a DJ and producer: Using her celebrity DJ status, Young started Genesis, her own annual New Year’s Day party event in Miami.

“I’m very proud of that event,” she said. “I started it six years ago. I wanted to do something different. I felt that people were sick of dealing with the crowds on New Year’s and the inflated prices. When I started, calling it Genesis, which means ‘new beginning,’ I didn’t expect it to have the international draw that it has, but I think we have created a brand.”

Young also started her own company, Ferosh, which puts out records and is taking tentative steps into the world of fashion.

“I’m working on launching the fashion line,” Young said. “Unfortunately with the economy the way it is, it’s kind of at a standstill at the moment. I do have samples of the line. I was waiting to see who is president before I moved further. Now that I know, I know how to move and develop the business based on taxes.”

As a label head, Young said she’s looking for artists that are more than just about making catchy beats.

“I believe that you have to have a powerful song. It all starts with the song,” she said. “Anyone can remix a great song and people are going to love it. It all starts with the lyrics and the actual written material. I look for good writing first, experience and the live-show aspect. If you’re not good live, it’s a point against you.”

Talking to Young, it’s obvious that she has a lot of energy for someone who keeps people dancing most of the night and has an entertainment empire to build during the day.

“It’s a lot to juggle, but for someone who is as ADD as I am, I get it all done,” she said. “I’m generally up at 7 in the morning every day. I got to the gym and then I work all day in the office, Monday through Friday. On the weekends is when I usually DJ. I manage to get it done with my BlackBerry and being hyper and a go-getter.”

With so many things on her plate, the only thing Young knows for sure about her immediate future, besides a well-deserved vacation, is that she plans to stay busy.

“I love DJing but there’s always something else that I’m looking to do,” she said. “I get bored very easily. I want to always expand and do more and see what happens from there.”