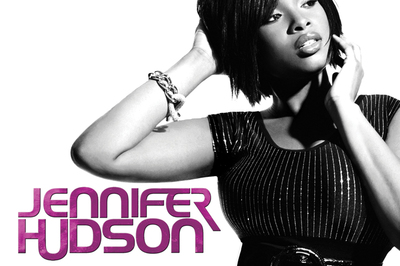 Jennifer Hudson self-titled Arista Records With the exception of her crack-addict years, Whitney Houston’s career still remains the blueprint for any and all divas in training who have a decent set of pipes. And it’s not enough to be able to sing your ass off; you’ve got to move records without appearing to sell out. So far Hudson is on a roll. Let’s go down the list: Phenomenal voice? Check. Appeared on TV? Check. Working with music-industry Svengali? Check. Glam? Check. Starring in Hollywood films? Check. Engaged/married to star-humping, reality-show whore of a scrub that will probably drag down her career? Check. She really should have waited for a little more success before her stab at street credibility disguised as a romantic entanglement, but whatever. For her debut album, Hudson manages to cover all the requisite R&B bases quite nicely. The propulsive beat of “Spotlight” is an excellent and tasteful piece of dance-pop. The requisite around-the-way-girl sassy street track with the rapper cameo, “Pocketbook” featuring Ludacris, is inventive enough and sure to make a booty shake here and there. Then there is the 1970s-soul-inspired bitch-back-off-my-man track “I’m His Only Woman” featuring Fantasia, which was a smart move because Hudson sings rings around her fellow “American Idol” alum on the track. There’s also a gospel track, “Jesus Promised Me A Home Over There,” which thankfully doesn’t appear alongside a song where a hoochie is getting beat down for being the other woman. There are a few tired moments on this set, though. The slow jam “What’s Wrong (Go Away)” would have been perfectly perfunctory if it wasn’t for guest vocals by rapper T-Pain using that damn Auto-Tune effect. “We Gon’ Fight” tried to rock an old-school Mary J. Blige vibe but falls flat. But those weak moments are few. Hudson delivers a performance worth all the hype and anticipation. And just in case you forget why Miss Hudson was a total badass in the first place, her roof-shaking performance of “And I’m Telling You I’m Not Going” from “Dreamgirls” is included on the disk as well. Nikka Costa Pebble to a Pearl Stax Records Costa proves that when it comes to white girls doing retro-soul music, the best bet is to buy American. Look at her overseas counterparts. Joss Stone has potential but needs a bit more seasoning. And Amy Winehouse? Let’s just wait and see what happens if and when she comes out of her death-spiral with the pipe before we hand in the verdict on her. To Costa’s credit, while most of her contemporaries are content to replicate and/or modernize the brilliant but highly regimented Motown sound of the late 1960s, she goes one better and incorporates the edgier post-Motown sound of the early to mid-1970s. The result is an organic and authentic sound one can only get from analog instruments, flesh-and-blood musicians and a willingness to just let loose and get down. It would be easy at this point to tag her another branch on the neo-soul movement or compare her to the late, great Janis Joplin, but that doesn’t give Costa the proper credit. Costa hit all the right sweet spots with her new album. Stevie Wonder’s influence is all over songs like the supremely funky title track, the laid back “Cry Baby” and the rocking “Keep On Pushin’.” The horns and the stomping rhythms of tracks like “Stuck To You” and “Keep Wanting More” invoke the infectious vibe of early Sly and The Family Stone. The swampy textured sound on songs like “Loving You” and “Damn I Said It First” adds an undeniably sexy feel to the pleasantly lazy grooves. Then, just when you thought Costa was all out of tricks, she injects a subtle undercurrent of psychedelic rock in the album closer, “Bullets In The Sky.” “Pebble to a Pearl,” with its lack of gloss, probably won’t become a huge crossover hit and, frankly, it would definitely suck the fun out of it if it did. It’s enough for it to be the real deal from beginning to end. Costa has pretty much snatched the title of the most interesting rock and soul revivalist. Let’s hope Lenny Kravitz wakes up soon and tries to take it back.