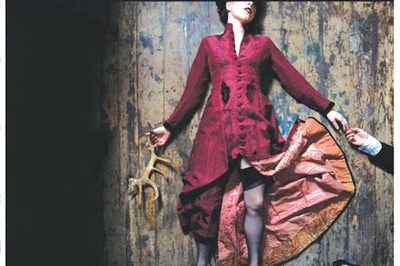 Solo albums can either be the death knell of a group that has an obvious star chomping at the bit to break out (Jackson 5, Fleetwood Mac, New Edition) or just a temporary distraction for a member of a successful group to get his artistic rocks off (Mick Jagger, Phil Collins). Two members of two highly regarded musical duos — Amanda Palmer of The Dresden Dolls and Amy Ray of Indigo Girls — have gone off on their own to stretch their artistic legs outside of their more famous pairings, much like Cher, Paul Simon and George Michael. Hopefully these albums aren’t a harbinger of the demise of the beloved duos.

Amy Ray Didn’t It Feel Kinder Daemon Records Ray puts some considerable distance between her solo work and Indigo Girls as she focuses more on electric guitar and roots rock than the Girls’ more-familiar folk leanings. Since Ray started her own independent label as a vehicle for her solo project, as well as to allow like-minded artists to make music without the pressure of traditional corporate expectations, why shouldn’t she? Ray seems as comfortable as a rocker as she is as a folk icon. She’s also every bit as fiery in her songwriting. There are moments on the CD where Ray could give the White Stripes a serious run for their money, thanks to the palpable sense of fun and reckless abandon on garage-rock-sounding tracks like “Bus Bus,” “Blame The Killer” and “Who Sold The Gun.” Elsewhere, she more-than-convincingly channels radio-friendly Sheryl Crow California rock on the polished bluesy-pop of “She’s Got To Be” and the lush “Stand and Deliver.” But Ray doesn’t completely abandon her folk side on her latest solo release. Comparatively stripped-down songs like “Rabbit Foot” and the fuzzy “Cold Shoulder” lay off the extra instrumentation just enough to appeal to the Indigo Girls’ purist following.

Amanda Palmer Who Killed Amanda Palmer Roadrunner Records It’s hard to imagine that Palmer’s debut solo effort would be radically different than a Dresden Dolls CD simply due to the fact that she’s the vocalist, pianist and main composer of the duo. That’s not to say that drummer, guitarist and vocalist Brian Viglione doesn’t bring some fire and flair of his own to the pair, especially during the Dolls’ excellent live performances. Chances are fans of The Dresden Dolls will be as equally enamored with “Who Killed Amanda Palmer.” It has a lot of the dark cabaret elements the Dolls are famous for and it’s hard to distinguish songs like “Astronaut” and “The Point of It All” as something other than Dresden Dolls tunes. Fortunately, those instances are few and far between on the CD. Outside of the confines of the group and with a kindred spirit like pianist/songwriter Ben Folds in the producer’s chair, the instrumentation gets more ambitious and some other interesting influences begin to creep into the music with pleasant results. The joyous Mardi Gras-style horns on “Leeds United” are an excellent touch that elevate the song. The electronics that percolate on tracks like “Oasis” and “Runs in the Family” put a welcome new-wave stamp on Palmer’s sound. The more melancholy moments are brilliant as well: “Ampersand” and “Strength Through Music” are seductive piano and string ballads, and two of the best tracks on the CD. Palmer even finds time to rock out on some distorted organ-driven tracks such as “Guitar Hero.” At the end of the day, “Who Killed Amanda Palmer” should do a fine job of keeping her core Dresden Doll fan base happy while forging into some uncharted artistic territory.