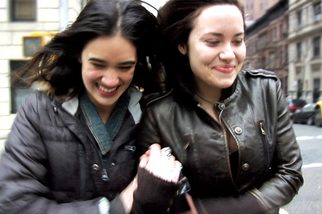 Many television shows and movies have dealt with the terrorist attacks of Sept. 11, 2001, with stories detailing preceding events and the aftermath. But until recently, hardly any of those stories have focused on the impact on the youth now in their mid- to late teens.

“Anyone But Me,” is a new Web-based series written by award-winning writer/director Tina Cesa Ward and veteran TV writer, producer and playwright Susan Miller.

Miller, who was a consulting producer and writer for Showtime’s “The L Word” and ABC’s “thirtysomething,” said the title of the series was Ward’s idea and, to her knowledge, doesn’t have an exact meaning.

“In my own interpretation, I think it really has to do with somebody coming of age and starting to be aware of the larger world and where she and young people fit in it,” she said.

The series introduces and follows a cast of ethnically diverse gay and straight teens searching for love and acceptance living in a New York City suburb in the post-9/11 age.

“The whole subject is extremely fragile,” Miller said about dealing with the subject of 9/11. “That is why people didn’t talk about it or try to write about it for a long time. One of the things that appeals to me in this is that we do have a character who’s dealing with the health issues. You don’t hear about that much. It’s there in our piece. It’s not central but it’s there. The thing we haven’t dealt with that much is the young generation, those people that were children during that horrible time and have grown up in a more perilous time. That is an aspect that has been overlooked.”

Miller said that even though the show features an ensemble cast, the show is centered on Vivian, a lesbian who has to move to the suburbs away from New York and her girlfriend Aster.

“She’s our connection to the reality of 9/11 because her dad is a firefighter and first responder,” she said. “The reason they’re moving out of the city is because he has had some health problems and they’re moving in with his sister-in-law. It really sets up that Vivian is a character that most has to deal with her sexual identity, holding together her relationship with her girlfriend and fitting in to this new environment.”

Geographically, her new home in Westchester is not that far from New York, but Vivian still has a lot of adjusting to do.

“Vivian, as much as she hates leaving, she has to make a life for herself in this new school in this community where she wonders if people are going to accept her as gay,” Miller said. “She’s not certain. She has doubts about how to make this all work. I think that there’s also that question of identity. Yes, it’s true in her case it’s about being gay, but it factors in all the characters in the show. She becomes friends with an African-American straight guy. That’s a real interesting relationship that we pursue in this.”

It’s refreshingly apparent in the first episode that this series isn’t cut from the same cloth as most of the teenage dramas on television, instead delivering a more realistic depiction of teenage issues compared to the oft-escapist TV shows populated with vapid and privileged youth.

“I think what makes us unique is that we shot in New York and we’re dealing with the real world, so to speak,” she said. “We’re dealing with what it’s like for a new generation to actually try to maneuver and find themselves at this time. We don’t want to shy away from that. It is also light-hearted and universal in that everybody went to high school once. If you are young or a parent of someone who is young, you are still struggling with a lot of the same things.”

“Anyone But Me” is also unique is that is being launched on Strike TV, a new Web-based network created during the recent writer’s strike to produce and promote original programming. Miller said that Strike gives writers and producers a level of creative freedom and an outlet that they wouldn’t have on most television networks.

“It’s a whole new world,” she said. “When we were writing this and casting and shooting it, we were out there in the wilderness. But because I’m a member of the Writer’s Guild, I happened to run into a friend who said, ‘Do you know about Strike TV?’ And I didn’t because a lot of these activities took place on the West Coast in L.A. and New Yorkers are in our big world. I got in touch with them and found out what they were doing in the late spring. They had this very ambitious plan, which has come to fruition. They launched to great reviews and acclaim at the end of October. What makes it special to me is that they are looking for content that is created by writers especially for the Web and they have really worked their asses off to come up with a terrific format. I would do it a disservice if I tried to explain it.”

Miller also pointed out that, even though “Anyone But Me” is Web-based, it is shot and produced like something you would see on television.

“I think the production values set us apart,” she said. “The things you see on the Web are often handheld and talking into the videocam like a diary. We’re really determined to shoot this like the best of television dramatic series. I worked on some really groundbreaking shows like ‘The L Word’ and ‘thirtysomething.’ How it was written and how we dealt with things was very important to me.”

Miller said the future of the weekly series, which premiered Dec. 8, is now in the hands of its audience.

“We’ve shot four episodes at this point which will take us through January,” she said. “In the meantime, we’re trying to raise money. We’re hoping that once people see this show, sponsorship will come. We have 10 episodes written. That comprises a season on the Web, but we have many more ideas to shoot more than that. We’d love it to go on and on. People can view it for free and these are 8-minute episodes. Click on it. Look at it. Tell your friends. That’s what we need. We just need people to watch.”

“Anyone But Me” can be viewed at www.strike.tv