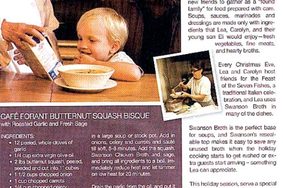 The world’s largest soup manufacturer refused this week to bow to pressure from right-wing, antigay groups who criticized its decision to reach out to LGBT consumers.

Campbell Soup Company, headquartered in Camden, N.J., came under fire from the American Family Association for an ad it placed in the Dec. 2 issue of LGBT magazine The Advocate.

Anthony Sanzio, a Campbell’s spokesperson, defended the company’s efforts and pledged to continue advertising to the LGBT community.

“Inclusion and diversity play an important role in our business, and that is reflected in our marketing plan,” he said.

The two-page spread for Swanson Stock, a new Campbell’s product, features a photo of New York City chef Lea Forant, her partner Carolyn and their son Eli with accompanying text stating that Forant uses Swanson products in her restaurant, Café Forant, as well as when preparing holiday meals for her family. Underneath the photo is a recipe for Café Forant’s butternut squash bisque.

On the opposing page is a photo of Christopher Lee, executive chef of New York’s Gilt Restaurant, along with a brief narrative describing that Lee uses Swanson Stock at his restaurant as well as at home. The ad does not identify Lee as being gay. Lee is the former executive chef at Philadelphia’s Striped Bass.

The ad featuring Lee was created for Campbell’s by ad agency BBDO; The Advocate designed the other.

AFA issued an “Action Alert” last week that encouraged members and supporters to contact Campbell’s and voice their displeasure.

“Campbell Soup Company has openly begun helping homosexual activists push their agenda,” the alert stated. “Not only did the ads cost Campbell’s a chunk of money, but they also sent a message that homosexual parents constitute a family and are worthy of support. They also gave their approval to the entire homosexual agenda.”

Sanzio said the advertisements, which mark the first time the company has advertised in an LGBT-specific publication, are realistic portrayals of Campbell’s customers.

“This community purchases our products and cooks with our products. What we’re trying to do is recognize the people who read The Advocate and who buy our products,” he said. “For more than a century, people from all walks of life have enjoyed Campbell’s products, and we will continue to try to communicate in ways that are meaningful and relevant to them.”

Sanzio said the company is slated to run several more similar advertisements in The Advocate over the next few months.

The group’s Web site states that it is working to “expose the misrepresentation of the radical homosexual agenda and stop its spread through our culture.”

In the past, the AFA has called for boycotts of companies that supported LGBT organizations. The Mississippi-based group boycotted the dollmaker American Girl for supporting the charity Girls Inc., which provides outreach to lesbian and bisexual young women, and beginning in 2005 staged a nearly three-year protest of Ford for its advertising to LGBT consumers and its participation and sponsorship of LGBT events.

Last summer, AFA began a boycott of Hallmark Cards because the company launched a line of same-sex wedding cards. In October, AFA lifted its boycott of McDonald’s; in July, the eatery had appointed a representative to the National Gay and Lesbian Chamber of Commerce, but he stepped down several months later and McDonald’s issued a memo to the AFA stating that it would take a more neutral stance on political and social issues.

Sanzio declined to conjecture about the AFA’s future course of action but pledged to continue with the campaign.

“We’re not going to speculate on the hypothetical. Right now we’re scheduled to run more ads in this publication and we’re going to continue to do that,” he said.