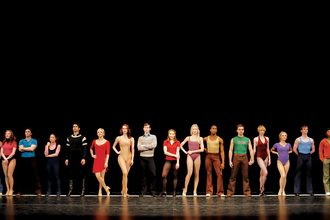 A number of talented and struggling hopefuls are whittled down to the best 17, who compete for the chance to live out all their hopes and dreams under the bright lights of the stage.

It probably does. But this isn’t “American Idol,” “America’s Got Talent,” “Making the Band,” “Rock Star,” “America’s Next Top Model,” “Nashville Star” or “Last Comic Standing.”

We’re talking about the Broadway stage institution that is “A Chorus Line.” Not that the similarities between this long-running musical and today’s television landscape aren’t glaringly obvious.

Written as a book in 1975 by James Kirkwood Jr. and Nicholas Dante, the story of a group of people trying to land eight highly coveted roles in a Broadway play, baring their souls in the process, was revolutionary and a fresh idea at the time. So much so that the stage production of “A Chorus Line,” directed and choreographed by Michael Bennett, became a smash hit on Broadway, winning numerous Tony Awards and a Pulitzer Prize. At the time, it was the longest-running production in Broadway history, with more than 6,000 performances.

Alex Ringler, another gay member of the touring cast, said “A Chorus Line” was the right play at the right time.

“I think it’s because it came at a time where no shows were running on Broadway and nothing staying in the theaters,” he said about the initial success. “Michael Bennett came out with this collaborative project that turned out to be ‘A Chorus Line.’ People were just really drawn to it to see the inner workings of theater and get a glimpse of the lives of people who put on shows for them. It’s kind of, in a way, one of the first reality shows and the first time that concept has ever been brought up. It’s about real people and real people’s lives. Everyone can pretty much relate to following a dream, trying to accomplish it.”

Liberto concurred that the collaborative beginnings of the play produced stories that still resonate with audiences today.

“The show is written directly from these people’s lives,” he said. “They sat around in a room with a tape recorder recording them and they talked from midnight until the sun came up. They just took little pieces here and there of what people said and they formed them into the book and the lyrics of the show. There’s a line that Sheila says late in the show: ‘Aw hell, everybody in the whole goddamned country wants to be a star,’ which is unfortunately true. I think that it’s sort of the punctuation to what the show really is.”

Liberto first became a fan of “A Chorus Line” through the 1985 film adaptation, which he said hasn’t aged as well as the stage production.

“I had seen the movie when I was younger and really, really loved it,” he said. “Now doing the show, I look back and I actually don’t like the movie as much. They changed so much in the movie and there was nothing wrong with the show, but they wanted to make it more ’80s. They changed a couple of the songs. They were still within the vein of the play but they turned ‘What I Did For Love’ into a love song about a man and a woman and really it’s not about that. It’s really about what I did for the love of my dancing career. It’s really about dancers and they made it a song about Cassie and Zach. They changed all the choreography to this hideous ’80s choreography. When I was younger and I didn’t know anything about musical theater, I was just trying get my hands on whatever I could to see dancing and it was amazing. Once you get older, do the show and you see what it’s really about at the heart of it, it breaks your heart to know that they changed so much.”

Liberto added that much of the show’s appeal is that, at its core, it hasn’t changed very much since its debut.

“It was really different then and it still is different now,” he said. “Since it moved to Broadway in 1975, not much has changed with the show. But musical theater has changed so much and ‘A Chorus Line’ made a lot of that change possible. But there’s nothing that has come along that has been like ‘A Chorus Line.’ It’s so unique and groundbreaking in its form as a musical. I think that no matter what you do in life, anyone can relate to being put on the line and being on the line to get a job or keep their job. The theme of the show can translate to anybody, not just dancers. And everybody loves backstage musicals, don’t they? Everyone likes to see what’s going on behind the scenes. I think that ‘A Chorus Line’ is that, and it’s so real and raw. That’s why people like it so much.”

Ringler also said his first introduction to “A Chorus Line” was the film.

“I had never seen the play,” he said. “I had known the history of it and I’ve seen the movie but I had never actually seen the play. We got to see it during rehearsals for the Broadway cast. I definitely am a fan of the play. It’s the best American musical.”

Liberto went on to become more familiar with the play as he landed roles in other productions leading up to the touring Broadway production.

“I was doing a regional production of it when the Broadway production was doing a round of auditions,” he said. “I was really sad that I couldn’t get to New York for it because I was out in Arizona playing Larry at the time. I think it’s probably best that I didn’t because I wouldn’t have even gotten [the role]. I’ve been keeping a close eye on the production because it’s always one that I wanted to be on. I went to see it a couple of times. I think the time was right when I went in for it this time.”

“I never felt like I was going to puke at an audition more than when dancing for Baayork Lee at ‘A Chorus Line,’” Liberto said. “Other auditions are like that but they’re not so intense.”

Apparently, Liberto was able to get over his audition jitters.

“Working with Baayork Lee is an amazing experience, not only because she was there at the beginning of ‘A Chorus Line,’” Liberto said. “She’s been in 12 Broadway shows and she worked with Michael Bennett on a bunch of different shows. She just has a wealth of information. That was the amazing part about being in rehearsals with her. Bob, our director, was involved in the original production. He was not in the cast. He was Michael Bennett’s assistant, the assistant director and assistant choreographer of the original production.”

Ringler said that working with Lee is “pretty inspiring.”

“It’s amazing because you’re getting it right from the source,” he said. “She’s so energetic and enthusiastic about the work. She loves the work so much that it’s contagious and you end up loving the work too.”

Liberto said that, on top of her brilliant choreography, Lee’s experience with the play helps the other castmembers flesh out their roles.

“Any question that you have, like ‘Why does my character say this line to this character?’ she will give me the whole back story of what was going on in 1975 when the show was going on,’ Liberto said. “It was a really valuable experience to have her on board.”

Both Liberto and Ringler probably have had a lot of questions about characters, as they have had to play multiple parts.

Ringler said he was hoping to land any role in the play no matter how small.

“I was just hoping they’d see me as something,” he said of the casting directors. “I was hoping something would stick. For the past six months they had me on as a swing, which is someone who doesn’t perform every night but he stays offstage and fills in if someone is out because of illness or injury. I got to play three roles: Don, Bobby and Greg. I really liked all of them but now that they’ve put me in Greg, I’m finding that it’s pretty much the fit for me.”

Liberto said that he was auditioning for a swing role but once producers saw him perform, they had other ideas.

“I would have been so satisfied with being one of the dancers that gets cut from the beginning of the audition,” he said. “I was having such a hard time getting cast in the show because the casting people weren’t sure when they saw me. They said, ‘We really want to use you. You’re such a great dancer, but you don’t really fit in these types.’ A cut dancer covers four different roles so you basically learn four different tracks to the show. You perform everything. So at the end of my rehearsal test, I pretty much knew everyone’s part because they put you through the wringer. Finally I was going in for the part of Larry and Larry was supposed to cover Bobby. I did the Bobby monologue for them first and all of a sudden the record player stopped. They decided to move in a new direction and consider me for Bobby. Out of all the characters in the show, it’s the character that is most like me. I’m really thrilled to keep playing the role.”

Why someone would want to relive the emotional stress of the audition process and rejection every night is anyone’s guess. Fortunately for Liberto, his casting allows him to sidestep that particular trauma … sometimes.

“The good thing about playing Bobby is that Bobby doesn’t get cut,” he said. “It’s a really emotional experience doing it every night. Sometimes I get caught up in it and sometimes I wind up bawling at the end of the show. It’s cathartic and its very true. I auditioned for probably over 100 things in my time in New York City and, aside from one Christmas show, this is the only other thing that I have booked. It’s a hard life as an actor living in New York. Some if us are luckier than others, but it’s hard.”

Another bonus for Liberto is that his role in “A Chorus Line” has him performing outside of his comfort zone.

“The singing is the most challenging for me,” he said. “I grew up as a dancer and I started taking vocal lessons while I was in college. I really wish I had started earlier. In this particular show, even though this is one of the most iconic dance musicals, I enjoy the acting the most. I’ve discovered that I really like doing it. I might start auditioning for plays now.”